US, Australia plan to carry on with massive Talisman Sabre exercise despite pandemic 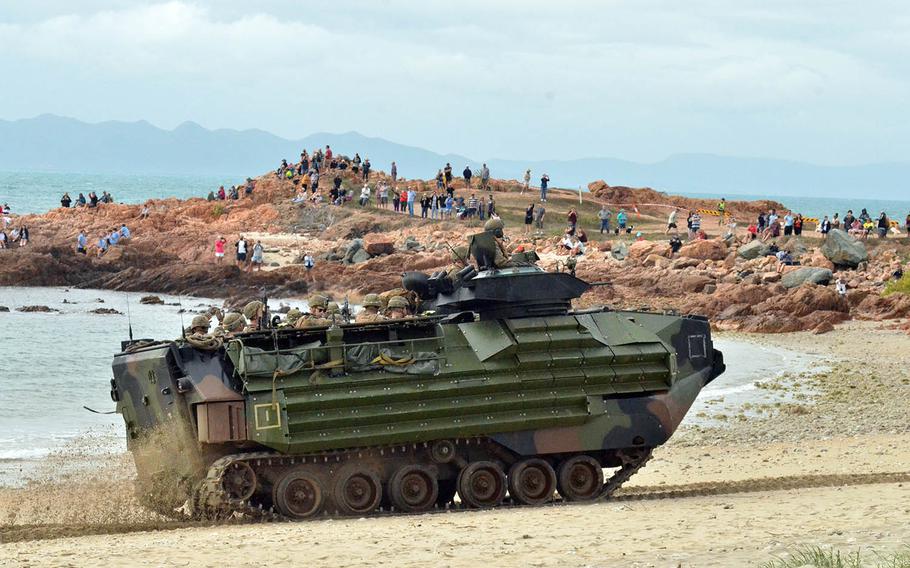 The United States and Australia will hold a large-scale, multinational military exercise Down Under this summer despite the challenges of the coronavirus pandemic, according to the Australian Defense Department.

Dates and locations for the next installment of the biennial Talisman Sabre, which involved 34,000 U.S. and Australian personnel in 2019, have been posted on the Australian Department of Defence website. The drills, which take place mostly in the northeast state of Queensland, will kick off in late June and peak July 18-31, according to the agency.

The coronavirus, which led to the cancellation of exercises in the Philippines last year, won’t derail Talisman Sabre, according to former Australian assistant defense secretary Ross Babbage, who spoke to Stars and Stripes by phone Thursday.

A six-month annual training rotation of 1,200 U.S. Marines to Australia’s Northern Territory went ahead last year, albeit at half strength and with two-week quarantines.

In response to the pandemic, Australia is adjusting how it does business while maintaining operational readiness, the defense department announced on its website.

“[Talisman Sabre] is critical to Defence maintaining that readiness,” the statement said.

The department will work with experts to understand and develop safe coronavirus practices while still allowing the exercise to achieve its objectives, according to the agency.

“Any community engagement that occurs will follow relevant government requirements at the time,” the statement said.

Australia will begin coronavirus inoculations next month and most military personnel should be vaccinated before Talisman Sabre begins, Babbage said.

Australia’s F-35s have been rated ready to deploy since Dec. 28, Defence Minister Linda Reynolds announced in a statement that day.

“The fifth-generation F-35A, along with the F/A-18F Super Hornet and EA-18G Growler, is key to our air combat capability,” she said.

The Australian Defence Force, in an email Thursday to Stars and Stripes, would not confirm that its F-35s would join Talisman Sabre, saying that planning for the event is ongoing.

In addition to the stealth fighters, Talisman Sabre will likely involve other cutting-edge military technology, such as new missiles and command and control systems, Babbage said.

“There is important experimentation and trailing of ideas and technology in these exercises,” he said. “Because of where it is you can do some quite sensitive stuff.”

Australia and the U.S. have announced plans to test hypersonic missiles in Australia this year.

Australia has also been used for recent Boeing trials of its Loyal Wingman drone that supports manned fighter aircraft. However, Babbage said the drones aren’t ready to participate in a large-scale drill.

Talisman Sabre will likely see more advanced amphibious capabilities than in 2019, including the use of new ship-to-shore transports launched from Australia’s amphibious ships, according to Babbage.

“In amphibious operations there is a lot more experience,” he said.

Nations that might participate alongside the U.S. and Australia haven’t been announced but Babbage said he expects Japan to send troops again. Members of the country’s newly formed amphibious brigade joined in the training in 2019.