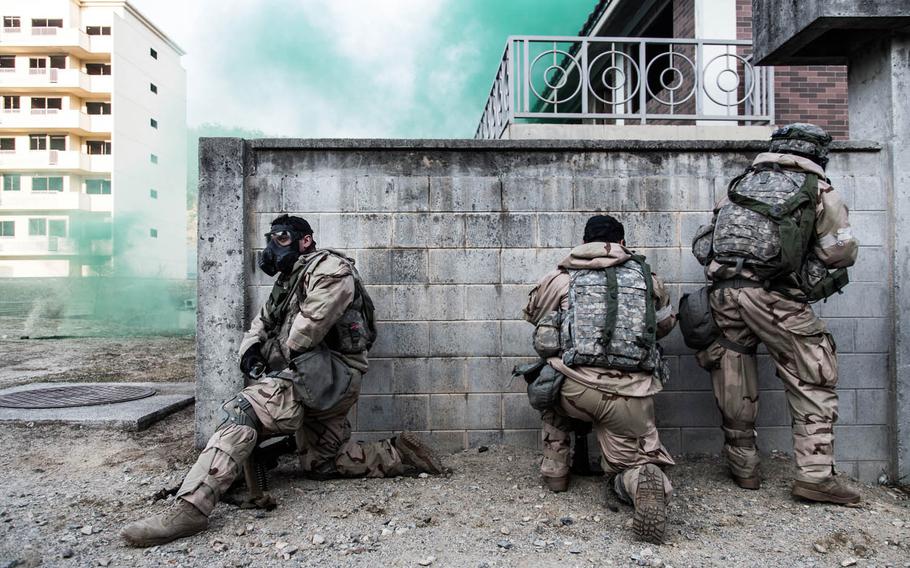 SEOUL, South Korea — The U.S. cut short contentious defense cost-sharing negotiations with South Korea on Tuesday in a rare public display of discord that has raised concerns about the future of the long-standing alliance.

With an end-of-year deadline looming, the two sides began the latest round of talks on Monday and had been due to continue through Tuesday evening.

But James DeHart, the chief U.S. negotiator, said the proposals put forth by the South Koreans were insufficient.

“Unfortunately, the proposals that were put forward by the Korean negotiating team were not responsive to our request for fair and equitable burden sharing,” DeHart said in a statement after the talks broke down in Seoul.

“As a result, we cut short our participation in the talks today in order to give the Korean side some time to reconsider,” he added.

He expressed hope that the South Korean side would “put forward new proposals that would enable both sides to work toward a mutually acceptable agreement in the spirit of our great alliance.”

The breakdown in talks comes as U.S. efforts to persuade North Korea to abandon its nuclear weapons have stalled.

The issue has triggered protests by South Korean activists accusing the Americans of “extortion” and of monetizing the alliance, which long has been considered a linchpin of regional security again threats from the North and China.

Experts said the U.S. stance might be a negotiating tactic, but it risked jeopardizing the relationship between the allies in the long term.

The South Koreans “are obviously and rightfully sensitive to both the exorbitance of the increase demand and the transactional nature of the negotiations,” said Jenny Town, a Korea specialist at the Washington, D.C.-based Stimson Center.

“Anti-American sentiment will undoubtedly grow if the U.S. sticks to the formula of a 400% increase,” she said.

Seoul also paid more than 90% of the $11 billion-plus construction costs for expanding Camp Humphreys, the U.S. military’s new headquarters base south of Seoul, although that was under a separate agreement.

South Korea’s Foreign Ministry suggested Tuesday that the U.S. was trying to broaden the scope of what’s included in the so-called Special Measures Agreement.

It said the U.S. position was “that the share of the defense cost should increase drastically by establishing a new article,” while Seoul maintains the increase should be in the range that is “mutually acceptable within the framework of the SMA.”

Negotiations over sharing the burden for stationing some 28,500 American troops on the divided peninsula have never been easy.

But the recent disagreements have exposed a wide gap as South Korea tries to juggle the need for U.S. military might against North Korea with Trump’s “America first” policies pressing for all allies to pay more for their own defense.

Alliance concernsExperts warned that could have long-term effects, especially because Trump has said in the past that he would like to bring the troops home eventually.

“The immediate breakdown in talks, itself, isn’t a blow to the alliance, but it indicates that the cost-sharing issue won’t be resolved soon,” said Frank Aum, a former Defense Department official now at the U.S. Institute of Peace.

He noted South Koreans who work for the U.S. military might have to be furloughed if a deal isn’t reached.

“In other words, this could undermine the alliance further down the line,” he said.

South Korean negotiator Jeong Eun Bo acknowledged that the two sides faced “a considerable difference” in their negotiating positions but said there had been no discussion of reducing the U.S. military footprint.

“We will continue to strive with patience to reach a mutually acceptable agreement,” he said.

The two sides failed to reach agreement in time for the deadline last year but eventually agreed to a retroactive stopgap measure in which South Korea increased its share by about 8.2%.

However, that deal was only extended for one year, unlike previous iterations that lasted five years.

“It’s unclear whether the exorbitant demand by the Trump administration is just a negotiating tactic or also a tactic to begin withdrawing U.S. troops,” said.

He expressed belief that the administration wants a “win” to show Americans that it’s saving costs and getting allies to pay more. Similar discussions are underway with Japan and NATO.

“But it’s a risky strategy,” Aum said. “It paid off during last year’s SMA negotiations, but the huge leap in demands may be more than (South Korea) can handle.”

Tuesday’s breakdown in talks comes as the U.S. has been pressing the South Koreans to renew a military intelligence sharing agreement with Japan that Washington considers vital to regional security.

The General Security of Military Information Agreement, or GSOMIA, is due to expire at midnight on Saturday. Seoul has shown no signs that it plans to cave in to pressure to change its plans to terminate the deal due to disputes over trade and historical issues with Tokyo.

Defense Secretary Mark Esper, who was in Seoul for talks last week, told reporters in the Philippines that South Korea is a “wealthy country” that “can and should contribute more.”