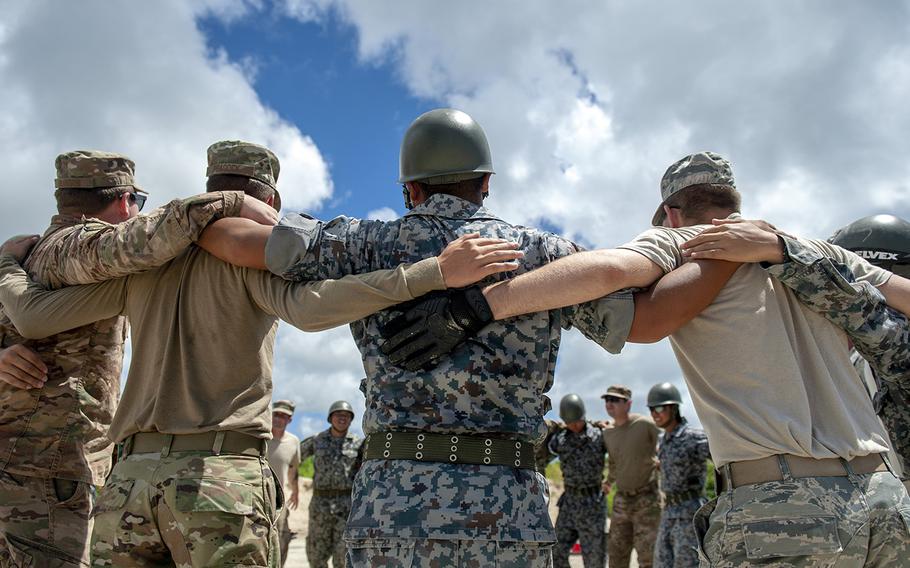 Members of the U.S. Air Force and Japan Air Self-Defense Force huddle up prior to an exercise at Naha Air Base, Japan, Aug. 30, 2019. (Peter Reft/U.S. Air Force)

Members of the U.S. Air Force and Japan Air Self-Defense Force huddle up prior to an exercise at Naha Air Base, Japan, Aug. 30, 2019. (Peter Reft/U.S. Air Force) TOKYO — Japan’s Ministry of Defense said strengthening relations with the United States is “more important than ever,” and bolstering its own defense capabilities can make that happen, according to its latest defense report published Friday.

Japan continues to consider relations with the U.S. the “cornerstone” of its defense strategy amid an uncertain and severe security environment, according to the annual report, Defense of Japan.

To boost the alliance, Japan should “proactively and independently strengthen our own security capability” by enhancing deterrence measures and increasing its presence in the South China Sea, according to the report.

The U.S and Japan have also agreed to “cooperate with a sense of urgency” on the newer defense domains of space, cyberspace and the electronic spectrum, the report said.

The Japan Self-Defense Force this year has been conducting surveillance operations in its territorial waters, where it confirmed 20 sightings of North Korean vessels “strongly suspected” of illegal ship-to-ship transfers as of June, according to the report.

It also trained with the U.S. and other partner nations in multiple exercises, such as Talisman Sabre 2019 off the coast of Australia in June and July.

About 54,000 U.S. military personnel are stationed in Japan on bases from Hokkaido to Okinawa under a 68-year-old mutual defense treaty that states the U.S. military will come to Japan’s aid if attacked, according to U.S. Forces Japan.

President Donald Trump criticized the treaty during the G-20 summit in Osaka this summer, telling reporters “almost all countries take tremendous advantage of the United States,” according to a June 27 Reuters report.

“If Japan is attacked, we will fight World War Three,” Trump said, according to Reuters. “ … But if we’re attacked, Japan doesn’t have to help us at all. They can watch it on a Sony television, the attack.”

Japan’s constitution, authored with the Allied Powers after World War II, bans maintaining an offensive military, but the country has a self-defense force.

A security bill passed in 2014 freed the country to take a more proactive security role in the region, where the defense report warns of threats from China and North Korea.

China has been escalating military activities in the seas and airspace surrounding Japan, especially near the Senkaku Islands in the East China Sea, according to the report. Known as the Diaoyu Islands in China, the uninhabited chain is claimed by both Japan and China.

“China is likely planning to make such activities routine, given that the Chinese Navy and Air Force are more frequently advancing to the Pacific Ocean and Sea of Japan in recent years,” the report said.

Japan scrambled aircraft against China 638 times in 2018, up from 500 times the prior year, the report said. Japan scrambles jets “if any suspicious aircraft heading to Japan’s territorial space are detected,” according to the report.

The report further noted that China is “moving forward with militarization” in the South China Sea, “as well as expanding and intensifying its activities in the maritime and aerial domains by deploying aircraft.”

“China continues unilateral efforts to change the status quo by coercion to create a fait accompli,” the Ministry of Defense said in the report.

As of this year, China had militarized 27 islands and reefs in the Paracel and Spratly islands, according to the Asia Maritime Transparency Initiative. International law does not recognize China’s claim to the features, which dot the oil-rich South China Sea, through which passes about a third of the world’s trade.

North Korea also remains a great threat to Japan even after a number of meetings between its leader, Kim Jong Un, and Trump, according to the report.

“There has been no essential change in North Korea’s nuclear and missile capabilities,” the report stated. “Military trends in North Korea continue to pose a serious and imminent threat to the security of Japan.”

The report said the North has “already miniaturized nuclear weapons to fit into ballistic missile heads,” a step up from previous years’ reports that suggested the rogue state sought to do so.