Buy Photo
A U.S. Army M1A2 Abrams tank, manned by soldiers of the 3rd Combined Arms Battalion, 69th Armor Regiment, rumbles across Novo Selo Training Area, Bulgaria, following a live-fire exercise on Thursday June 25, 2015. Concerns over Russia's incursion into Ukraine may be one of the reasons that Europe was spared cuts announced by the U.S. Army on Thursday. (Michael Abrams/Stars and Stripes)

Buy Photo
A U.S. Army M1A2 Abrams tank, manned by soldiers of the 3rd Combined Arms Battalion, 69th Armor Regiment, rumbles across Novo Selo Training Area, Bulgaria, following a live-fire exercise on Thursday June 25, 2015. Concerns over Russia's incursion into Ukraine may be one of the reasons that Europe was spared cuts announced by the U.S. Army on Thursday. (Michael Abrams/Stars and Stripes) 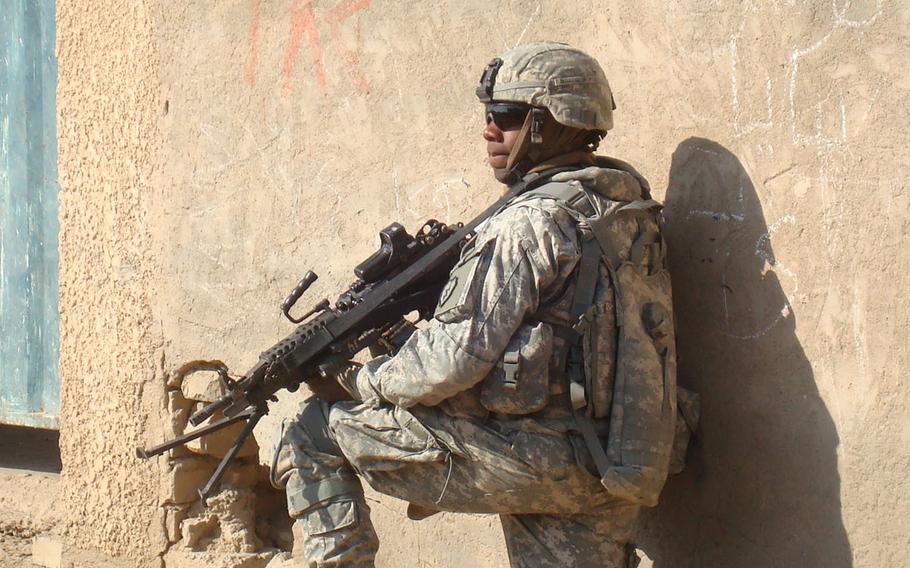 A 2nd Stryker Brigade Combat Team, 25th Infantry Division soldier patrols an area northwest of Baghdad in 2008. On Thursday, the Army announced that the Hawaii-based 2nd BCT would be converted to a light infantry brigade as part of a plan to cut 40,000 active-duty troops. (U.S. Army photo) U.S. soldiers take part in the Best Warrior Competition 2015 at Masan range, South Korea, on April 14, 2015. Because of the North Korean threat and a rising China, U.S. Army units in South Korea were spared from the Army's plan to cut 40,000 active-duty troops. (U.S. Army photo) An Alaska National Guard CH-47 Chinook filled with paratroopers from 3rd Battalion (Airborne) 509th Infantry Regiment, descends during air assault training over Joint Base Elmendorf-Richardson, Alaska, on May 15, 2015. On Thursday, the Army announced that the Alaska base would lose nearly 60 percent of its active-duty troops as part of a plan to lower the overall force structure by 40,000. (U.S. Army photo)

America’s commitment to the Pacific pivot and unease about a more assertive Russia appear to be driving the Army’s decision not to reduce troop numbers in Japan, South Korea and Europe.

The Army plans to cut 40,000 soldiers and 17,000 civilian jobs over two years, but details released Thursday show the plan affects only the Pacific on the western side, with U.S. Army Pacific saying Hawaii and Alaska will lose 3,800 soldiers. None of the cuts will affect units in Europe.

Officials have yet to determine which Army civilian personnel will lose their jobs, and they warned that there will likely be further troop reductions if Congress and the White House can’t avert another round of defense budget cuts. Those opposed to the cuts question their wisdom amid a number of troubling developments: Cold War-style tension with Russia, Chinese aggression in the South China Sea, North Korea’s nuclear weapons and missile programs, and the rise of the Islamic State in the Middle East.

If there are further cuts, the Army — which will shrink from 490,000 to 450,000 active-duty soldiers — will be “incapable of meeting current deployment requirements and responding to overseas contingency requirements,” U.S. Army Pacific said in a statement.

The cuts will reduce the ability of the Alaska-based force to conduct simultaneous operations. However, its arctic, high-altitude, joint forcible-entry capability will be retained, the statement said.

In Hawaii, the Army will cut 1,200 soldiers by converting the 2nd Stryker Brigade Combat Team, 25th Infantry Division, at Schofield Barracks to a light infantry unit. The brigade’s eight-wheeled Stryker armored vehicles may be handed over to a National Guard unit in Washington state that trains regularly with U.S. Army Pacific, the statement said. That means they still could be deployed fairly quickly if needed.

In the case of Europe, maintaining current force levels is key to carrying out a mission that has taken on added significance in the past year after Russian aggression in Ukraine and concerns about potential instability along NATO’s eastern and southern flank, where the Islamic State group operates within mere miles of alliance territory.

“USAREUR is holding steady at approximately 30,000 soldiers; with this force strength, the Army can maintain its presence and mission here,” U.S. Army Europe said in a statement. “The forces remaining in Europe represent the current necessary forces to meet strategic and collective security requirements.”

The decision to hold troop levels steady in Europe comes after several years of cutbacks, which included USAREUR’s loss of two heavy brigades. In April, the Army also announced it would cut about 25 Germany-based Apache attack helicopters and a series of other choppers as part of an Army reorganization.

Traditionally, many U.S. lawmakers have singled out Europe as an ideal place for cuts rather than home districts with Army bases. While some in Congress are now lashing out at the Army’s latest round of domestic cuts, they haven’t yet fallen back on the old argument that the U.S. military isn’t needed in Europe.

Gen. Joseph Dunford, who is expected to soon be confirmed as the next chairman of the Joint Chiefs, emphasized during testimony Thursday the new security environment on the Continent when he singled out Russia at the U.S.’s top national security threat.

The lack of cuts in the Pacific — outside of Hawaii and Alaska — ensures the military can meet its increasing set of commitments in that region, officials said.

Gen. Vincent K. Brooks, commander of 106,000 soldiers assigned to U.S. Army Pacific, said in the statement that the Army retains significant capability in the Pacific. America’s rebalance of military forces to the Far East – dubbed the Pacific pivot remains on a strong footing, he added.

“It is clear that the Army continues to remain committed to this region as it made these tough decisions,” he said.

Military officials have said they are inevitably asked about America’s commitment to the pivot whenever they meet with Pacific leaders.

“Among those nations which have doubt about the U.S. commitment, [the announcement] will, to some extent, alleviate it,” said Carlyle Thayer, a security consultant and professor emeritus at the University of New South Wales in Australia.

However, the main concern among Asian nations isn’t troop cutbacks, Thayer said. It is the fact that the Middle East is drawing U.S. attention away from the region.

In South Korea, the Army remains the dominant service in terms of total personnel and overall command. In recent years, it has also increasingly looked for a role within the rest of the Asia-Pacific region.

David Garretson, a professor of international relations at University of Maryland University College in Seoul, said the Army is unlikely to downsize its troop presence in South Korea because of the specter of a nuclear-capable North. Some 28,500 U.S. troops are stationed on the peninsula as a deterrent to the North.

“The only mission for the Army in the Pacific is Korea,” he said.

South Korea doesn’t want the U.S. to downsize its troop presence, which could be seen as a decline in U.S. support, he said. And countries in the region — even China — probably view the U.S. as a stabilizing presence even if they won’t admit it.

“They (Beijing) like the U.S. being here because we tie the North down and take pressure off them,” he said. He added that the Army presence has contributed to stable borders and a lack of conflict on the peninsula; decreasing that presence could disturb the status quo.

Outside of South Korea, the Navy, Marine Corps and Air Force maintain larger bases and more personnel due geography and the nature of regional threats.

“The ‘rebalance’ has a shelf life of the Obama administration, but the Pacific fleet isn’t going home,” Thayer said. “Whomever is president next will reaffirm that the United States is a Pacific power.”

Ralph Cossa, of the Pacific Forum think tank in Hawaii, said the personnel cuts there won’t have a significant impact on the local economy. There were fears that the 25th Infantry Division might be inactivated, he said.

Cossa said it seems unfair for politicians to cut the size of the military and expect it to carry out the same missions.

“They are already stretched. You have guys serving two or three tours overseas. In good conscience, you can’t be cutting the numbers,” he said.