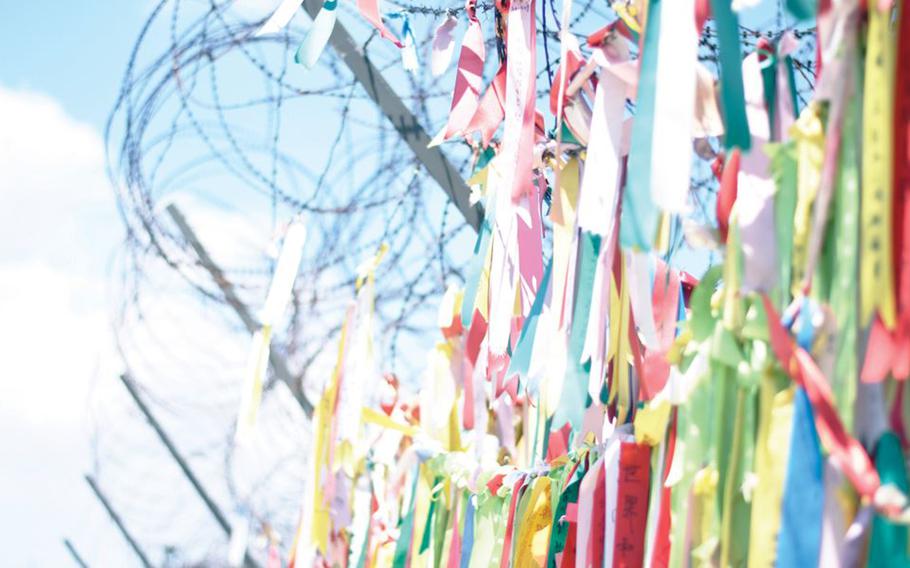 Buddhist prayer ribbons hang from a security fence in Paju, South Korea, near the Demilitarized Zone. (Aaron Kidd/Stars and Stripes)

SEOUL, South Korea — Was it an accident? Or did North Korean soldiers fire at a South Korean guard post on purpose?

The U.S.-led United Nations Command sent a team to the tense Korean border area Monday to investigate whether the exchange of fire the day before violated the armistice agreement that ended the 1950-53 Korean War.

The UNC, which administers the Demilitarized Zone, said no further comment would be issued “until the investigation is complete and the report has been provided to the appropriate authorities.”

Secretary of State Mike Pompeo and South Korean military officials already have said they believe the shooting was not intentional.

But some analysts suggested it may have been a low-level provocation aimed at boosting the North’s leverage in talks with the United States and South Korea.

North Korea, meanwhile, has not responded to a message sent via an inter-military communication line asking for an explanation, according to the South Korean Defense Ministry.

“It seems to be accidental, but South and North Korea need to be careful with each other because such an accident has the prospect to raise tensions on the Korean Peninsula,” said Yang Moo-Jin, a professor at the University of North Korean Studies in Seoul.

The incident began Sunday morning when South Korean soldiers at a guard post in a central part of the Demilitarized Zone heard gunfire, then found four bullet holes on the wall of the guard post.

The U.N. Command, which is led by Army Gen. Robert Abrams, dispatched a multinational special investigation team to the site on Monday.

The team was accompanied by Swedish and Swiss members of the Neutral Nations Supervisory Commission who were acting as observers.

“The investigative team will assess the events that took place and produce a report based on their findings to determine if a violation of #Armistice occurred,” the UNC said in a tweet.

The new mystery began two days after North Korean leader Kim Jong Un appeared at the ribbon-cutting for a new fertilizer factory, tamping down speculation about his health after a nearly three-week absence.

“We expressed concern about the seriousness of the present situation, said North Korea should explain what happened and called on Pyongyang to halt such behavior immediately,” she added.

Jean Lee, director of the Korea program at the Washington, D.C.-based Wilson Center, said the breakdown in communications was troubling.

“What we would not want to see is gunfire sparking an exchange that could escalate into deadly violence,” she said. “While troops on the southern side responded with restraint this time, the ambiguity most certainly will have everyone in the DMZ on edge.”

The DMZ, about 155 miles long and 2.5 miles wide, has often been a flashpoint in tensions between the two Koreas and past violence has pushed the two countries to the brink of conflict.

The border is lined with barbed wire fences and filled with land mines with tens of thousands of combat troops on both sides.

The two Koreas signed a military agreement in September 2018 calling for both sides to halt all hostile acts against each other and establishing a series of confidence-building measures.

However, the North has conducted several short-range missile tests and artillery drills in recent months while expressing frustration over stalled nuclear talks with the United States.

“‘Accident’ or not, North Korean shots at South Korea's GP violates the Sept. 19 inter-Korean military agreement and notable that Pyongyang hasn't yet picked up the phone or explained the incident,” Duyeon Kim, a Seoul-based adviser with the International Crisis Group, said in a tweet.

Pompeo told ABC News “This Week” in an interview on Sunday that the United States believes the shots “were accidental.”

“The South Koreans did return fire. So far as we can tell, there was no loss of life on either side,” he said.

South Korean military officials also have said they believe the shooting was not intentional, noting it was foggy in the area and the shooting occurred at a time when North Korean troops are believed to be having a shift change and testing their weapons.

Farming activity in the area also was said to be uninterrupted.

Chun In-bum, a retired South Korean lieutenant general who served on the DMZ as a battalion commander in the 1990s, said it could have been an accidental discharge.

“The probability is that’s what happened in my view,” he said Monday in a telephone interview.

He dismissed a suggestion that the North Koreans may have been trying to send a message by attacking the South Korean guard post.

“It was just a burst and then it ended,” he said. “If they wanted to send us a message I’m sure they would’ve done it with a bigger bang.”

Other analysts said the North may be trying to pressure South Korea to take its side and offer more economic assistance or coronavirus aid despite U.S.-led sanctions.

“Pyongyang may not have wanted to carry out a high-intensity provocation this time so it may have only breached the inter-Korean agreement slightly,” said Moon Keun Sik of the Korea Defense and Security Forum.

“Pyongyang might be trying to win cooperation from Seoul by bringing the South to the edge of crisis first, then easing the situation later,” he added.