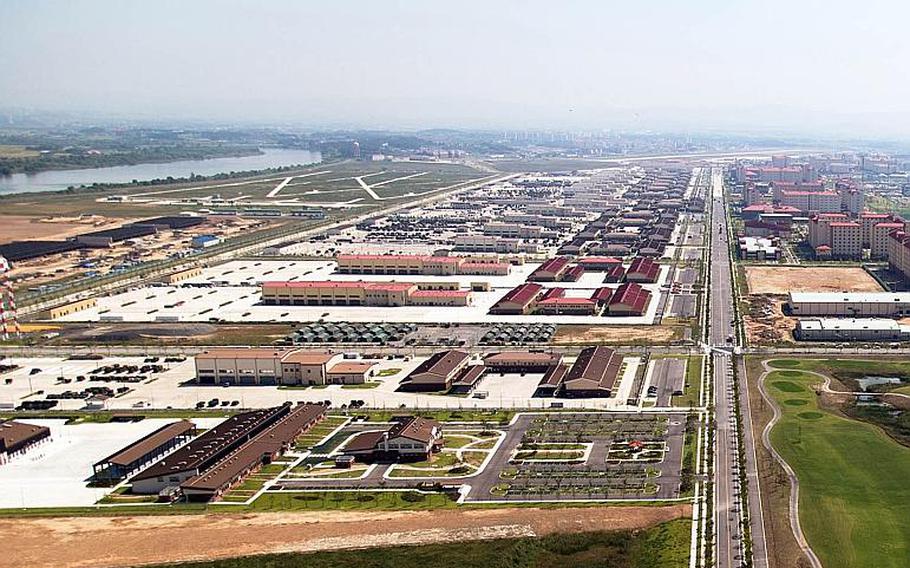 Motorpool row sits across from the barracks at Camp Humphreys, South Korea, as seen in September 2017. (Stars and Stripes)

Hyundai Oilbank Co. Ltd. and S-Oil Corp. are the latest to be charged in a massive investigation into allegations that companies conspired to suppress and eliminate competition during the bidding process for lucrative fuel-supply contracts.

That caused the Defense Department to pay substantially more for fuel-supply services than under a normal bidding process.

The companies agreed to pay about $75 million in criminal fines and $52 million in separate civil cases, the Justice Department said. They also agreed to cooperate in the ongoing criminal investigation.

Seven South Korean individuals, including managers and executives, also were charged in the three-count indictment from the U.S. District Court for the Southern District of Ohio that was unsealed Wednesday.

“We will not waver in our dedication to prosecuting corporations and individuals, wherever they are located, that seek to profit at the expense of American taxpayers,” Delrahim added.

The investigation was launched after a tip was received on the Defense Logistics Agency Inspector General’s hotline.

The Justice Department said at the time that the violations occurred during the bidding process for contracts from 2005 to 2016.

The Defense Logistics Agency and the Army and Air Force Exchange Service are responsible for contracts with South Korean companies to supply fuel to military bases.

Hyundai Oilbank, S-Oil and the seven individual defendants were charged with participating in a conspiracy “to suppress and eliminate competition during the bidding process” for fuel-supply contracts to all branches of service.

They also were accused of “participating in a conspiracy to defraud the United States by impairing, obstructing, and defeating the lawful function of the procurement process for the fuel-supply contracts.”

But the Antitrust Division agreed to move to dismiss the second count against the companies upon sentencing as part of its plea agreements, which are subject to court approval, according to the Justice Department.

The third count charged one of the South Korean defendants, identified as Hee-Soo Kim, with “tampering with a witness by use of intimidation, threats, or corrupt persuasion,” to hinder communication with a U.S. law enforcement officer.

“The criminal charges and fines announced today demonstrate the heavy consequences for those who subvert competition through collusion and price fixing,” said Paul Sternal, deputy director of the Defense Department’s criminal investigative service.

The civil investigation was the result of a whistleblower lawsuit filed under the False Claims Act, which allows for private parties to sue on behalf of the United States and to share in any recovery.

Constantine Cannon LLP, the law firm that is representing the anonymous whistleblower in the civil case, said it was the largest-ever settlement involving bid-rigging under the False Claims Act.

Eric Havian, a lead attorney in the case, said the whistleblower is a South Korean and is entitled to between 15 percent and 25 percent of what is recovered for the government in the civil portion of the case.

“The fact that it was a whistle blower who was responsible for bringing the case is what is most significant,” he said in a telephone interview.

“I think this kind of bid-rigging goes on all over the world and so when the word gets out that there’s a reward for revealing this kind of widespread activity, I think you’re going to see a lot more of these cases,” he added.