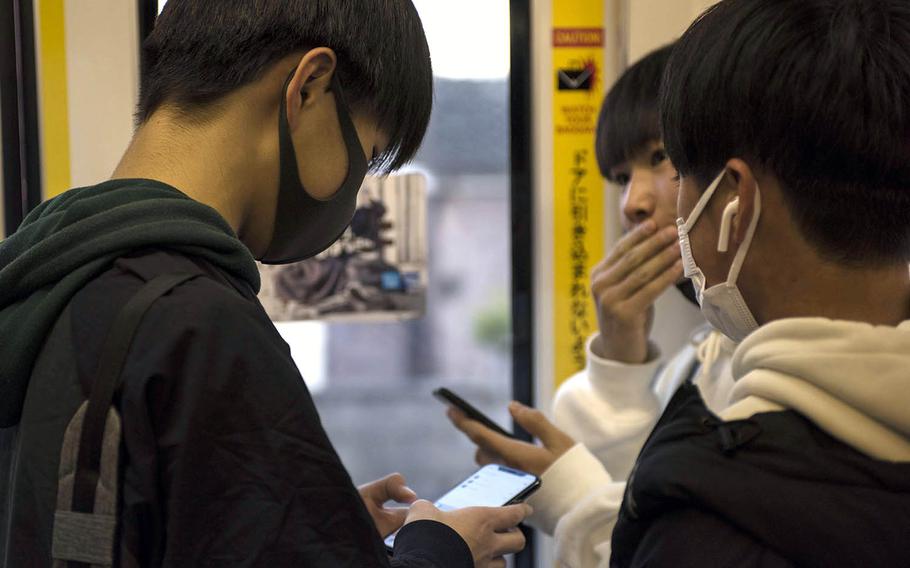 Buy Photo
Young men wear masks as protection against the coronavirus while riding a train this month in western Tokyo. (Theron Godbold/Stars and Stripes)

The Tokyo Metropolitan Government said 378 people tested positive for the coronavirus Wednesday, a sixth day below 400 new one-day cases in a city of 13.5 million and a tenth day below 500, according to public broadcaster NHK and metro government data.

The city and three surrounding prefectures are in a state of emergency until March 7, though the measures it carries are mostly voluntary, including working from home, reducing travel and closing businesses like restaurants at 8 p.m.

Central Tokyo remains off-limits to U.S. military personnel, including civilian employees and family members, except those on official business or who live there.

Two people tested positive at U.S. military installations. Both were already quarantined after recently arriving in Japan, one at Marine Corps Air Station Iwakuni near Hiroshima and the other at Kadena Air Base on Okinawa.

The Iwakuni base commander, Col. Lance Lewis, on Tuesday said the base had cleared its last known patient and was free of the virus.

Since Friday, base commanders at Sasebo Naval Base and Naval Air Facility Atsugi have also said their installations are free of known cases of COVID-19, the coronavirus respiratory disease. A spokesman for Misawa Air Base in northern Japan on Wednesday said that base is also free of cases.

Misawa has expanded its vaccine campaign to eligible individuals ages 65-74 or at a higher risk from COVID-19, a base spokesman, Maj. Cody Chiles, told Stars and Stripes by phone Wednesday.

Shipments of the Moderna vaccine continue to arrive in Japan for U.S. military members, Defense Department civilians, their families and other eligible recipients at 400-500 doses, up to thousands for some bases on Okinawa, every four to five days, a spokesman for U.S. Forces Japan said Wednesday.

That number is expected to grow in March, Col. Robert Firman told Stars and Stripes by phone.

Each service is administering its own vaccination program, and Firman said he could not speak to progress at individual bases.

However, Pacific Air Forces ordered its installations to get shots into arms rather than hold back a supply for the second round, he said.

The Moderna vaccine must be administered in two shots in a sequence originally set at 28 days apart but increased by the U.S. Centers for Disease Control and Prevention to 42 days.

As a result, some bases may have delayed the second round for people while it awaits further supplies, Firman said. The Japanese government has cooperated with the U.S. military to get its vaccine supplies delivered promptly, he added.

Japan began inoculating 40,000 medical professionals Wednesday with the Pfizer-BioNTech vaccine, according to NHK.