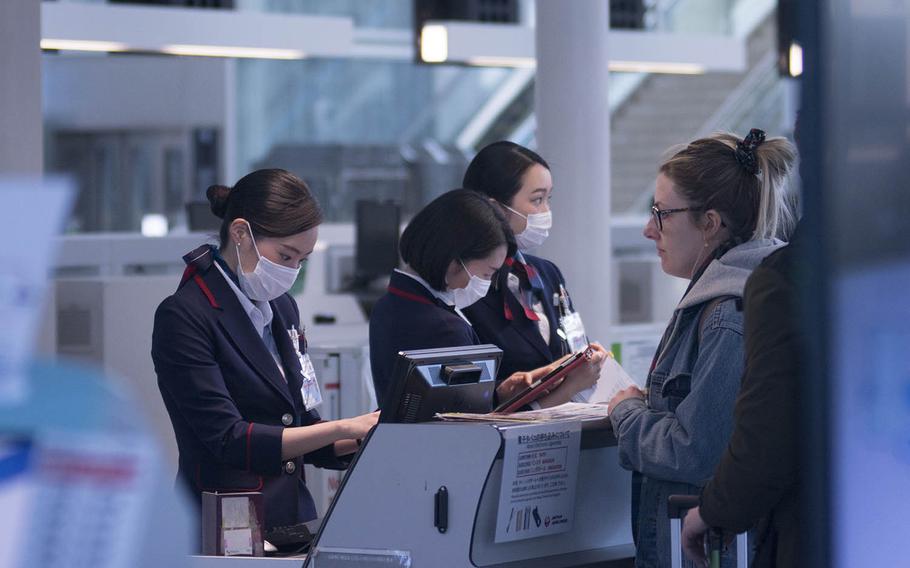 Buy Photo
Two Japanese airlines will require passengers to wear masks in terminals and aboard their flights, as these airline ticket agents at Haneda Airport are doing March 18, 2020. (Akifumi Ishikawa/Stars and Stripes)

TOKYO — Some Japanese airlines are now requiring passengers to wear face masks to prevent the spread of the coronavirus as Japan gradually lifts its nationwide state of emergency.

All Nippon Airways announced Thursday that it requires all of its passengers to wear masks while in the airport and on board the aircraft starting June 1.

“Passengers who do not wear a facial covering may be refused” boarding, the company stated on its website. It also stated that passengers who are feverish or not feeling well will also be denied boarding.

The Ministry of Land, Infrastructure, Transport and Tourism with the airlines have already been taking passengers’ temperatures at safety inspection areas at major airports in Japan.

Both companies said children and passengers who have difficulties wearing masks are exempt from wearing them.

Japan counted 16,424 infected cases and 777 deaths as of midnight Thursday, according to the Ministry of Health, Labour and Welfare.

Prime Minister Shinzo Abe declared a state of emergency on April 7 in some areas, including Tokyo, and later extended it nationwide. In early May, the declaration was extended until end of the month but lifted by Thursday in many prefectures where the virus’s spread has slowed down.

The emergency is still in effect in five prefectures, including Tokyo.