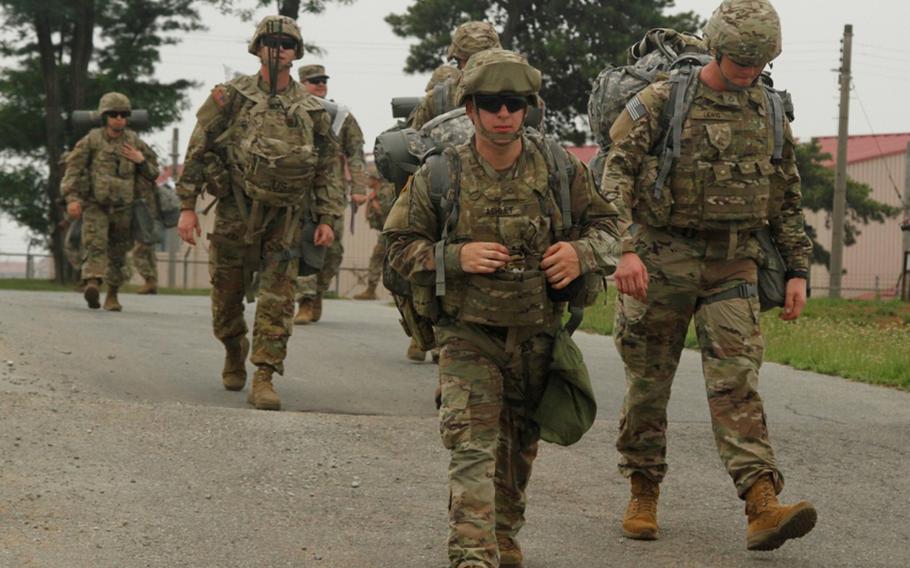 SEOUL, South Korea — South Korea has agreed to pay "substantially more" to the United States for its defense against North Korea, and talks are underway to further boost its contribution, President Donald Trump said Wednesday.

His comments came a day after North Korea test-fired two short-range ballistic missiles in what it called a warning against joint military exercises being conducted by Seoul and Washington.

The topic also could come up when Defense Secretary Mark Esper holds talks with his South Korean counterpart in Seoul on Friday as part of his first official trip to Asia in his new role.

The allies reached a stop-gap agreement last year in which Seoul agreed to increase its contribution by about 8%. That deal, however, will expire at the end of the year, forcing the two sides back to the table.

“South Korea has agreed to pay substantially more money to the United States in order to defend itself from North Korea,” Trump wrote in a series of tweets.

It wasn’t clear if he was talking about last year’s figure or a new deal.

South Korea’s Foreign Ministry said formal negotiations on the Special Measures Agreement, as the contract is known, had not officially started. It declined to comment further on Trump’s tweets.

Trump claimed that South Korea has “paid very little” to the United States in past decades but added that “last year, at the request of President Trump, South Korea paid $990,000,000.”

Seoul agreed to pay 1.04 trillion won (about $920 million at the time) last year to offset the costs of stationing some 28,500 American troops on the divided peninsula.

That was an increase of 8.2% from the previous annual contribution but far short of U.S. demands, which some reports placed as high as $1 billion.

“Talks have begun to further increase payments to the United States,” Trump said. “South Korea is a very wealthy nation that now feels an obligation to contribute to the military defense by the United States of America.”

He stressed that “the relationship between the two countries is a very good one!”

The current deal was made retroactive after the allies failed to reach a Dec. 31, 2018, deadline for extending the previous five-year agreement. It also only covered a one-year period as part of the compromise.

A South Korean foreign ministry official said the allies “agreed to discuss the defense cost-sharing issue in a reasonable and fair way,” during a recent visit by Trump’s national security adviser, John Bolton.

The troubled negotiations have been a major irritant in the U.S.-South Korean alliance, which was forged in the 1950-53 Korean War, at a critical time.

North Korea has conducted four weapons tests in less than two weeks, dampening hopes for a quick resumption in stalled nuclear talks with the United States.

In line with his position that U.S. allies should pay more for their own defense, Trump has complained that maintaining troops in South Korea is too expensive and said he would like to bring them home.

South Korea has countered that it pays nearly half of the $2 billion cost as well as funding the nearly $11 billion construction project to expand Camp Humphreys, the new U.S. military headquarters base south of Seoul.

Mintaro Oba, a former State Department Korea specialist, said the need to renegotiate the SMA after only a year puts tremendous pressure on the alliance and gives North Korea another card to play.

“If we’re negotiating with the North Koreans while simultaneously demonstrating that we are shaky in our defense commitment to the South Koreans, that gives the North Koreans tremendous leverage,” he said in a telephone interview.

“The impression that the United States is demanding or extorting more money from South Korea is very challenging to President Moon,” he said. “And the bigger the figure, the harder the sell to the public.”