Trump says N. Korea making ‘fools of US negotiators’ amid fears of another missile test 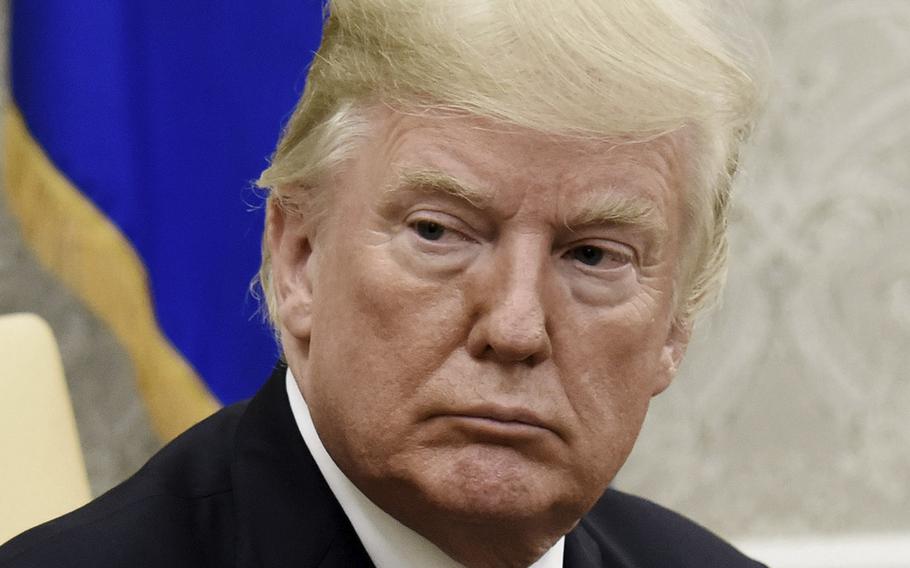 SEOUL, South Korea — President Donald Trump said North Korea has been making “fools of U.S. negotiators” and “only one thing will work,” the latest hint of possible military action against the communist state.

The comments came amid fears that the North may test-fire another missile in connection with the anniversary Tuesday of the foundation of its ruling party.

“Presidents and their administrations have been talking to North Korea for 25 years, agreements made and massive amounts of money paid,” Trump wrote in a tweet posted Saturday.

“It hasn’t worked, agreements violated before the ink was dry, [making] fools of U.S. negotiators. Sorry, but only one thing will work!” he added.

Presidents and their administrations have been talking to North Korea for 25 years, agreements made and massive amounts of money paid......

...hasn't worked, agreements violated before the ink was dry, makings fools of U.S. negotiators. Sorry, but only one thing will work!

— Donald J. Trump (@realDonaldTrump) October 7, 2017It was the latest signal that the president is taking a hard line on dealing with the North despite efforts by his secretary of state and other advisers to find a diplomatic solution to the crisis over the country’s nuclear weapons program.

Trump also told reporters at a gathering last week with military leaders that this “could be the calm before the storm.” He declined to clarify his remarks but many speculated that he was referring to North Korea.

A Russian lawmaker said the North is preparing to launch a long-range missile “in the nearest future” based on his recent visit to Pyongyang.

He said the delegation was told the North has the technology that would allow the missile warheads to survive the heat when re-entering the atmosphere.

Many experts doubt the North has perfected that essential capability but say it has made major advances in its nuclear weapons program despite several rounds of tightened economic sanctions and other punishing measures.

South Korea also has said it is closely monitoring the possibility of another provocation as the North gears up to celebrate the ruling Workers’ Party foundation day. But the president’s office said there has been no clear sign of activity.

The isolated country frequently times high-level missile tests and other events to coincide with key holidays.

North Korea has sharply raised the stakes in recent months, launching dozens of missiles including two intercontinental ballistic missiles and two others that flew over Japan.

It also conducted its sixth and most powerful nuclear test on Sept. 3.

Trump has responded with belligerent rhetoric and warnings that military action is on the table. Last month, he told the U.N. General Assembly that he will “totally destroy” North Korea if forced to defend the U.S. and its allies.

Secretary of State Rex Tillerson has pushed for a diplomatic solution that would rely on punishing sanctions and international pressure to curb the North’s ambitions.

I told Rex Tillerson, our wonderful Secretary of State, that he is wasting his time trying to negotiate with Little Rocket Man...

Many North Korea watchers have expressed concern about Trump’s decision to use cryptic and threatening language, saying it raises the risk for a miscalculation that could lead to open conflict.

“Trying to ‘out Kim Jong Un’ Kim Jong Un in the threat department is not a winning strategy,” said Kingston Reif, director for disarmament and threat reduction policy at the U.S.-based Arms Control Association.

“It’s only making the problem worse and reinforces North Korea’s desire to advance its nuclear and missile development as rapidly as possible in order to strengthen deterrence against a possible U.S. attack,” he added.

“The U.S. strategic assets that were deployed on the Korean peninsula will be the first target of destruction by the revolutionary armed forces of [North Korea) which has the U.S. mainland across the Pacific within their striking range and the puppet forces will face total destruction,” the state-run Korean Central News Agency reported. It cited a statement by an unnamed spokesman for the Pan-Korean Emergency Measure Committee for Opposing Nuclear War Drills against the North.

Past efforts at negotiating an end to North Korea’s missile and nuclear development have had limited success in exchange for concessions from the West.

Washington and Pyongyang signed a deal known as the “agreed framework” in 1994 in which the North committed to freezing its plutonium weapons program in exchange for aid. But that agreement collapsed in 2002.

Reif pointed out talks have been effective in the past.

“A more effective strategy would be to marry continued pressure, deterrence and containment with pursuit of diplomatic off ramps,” he said. “There is no military solution to this growing problem.”