Trump likely to visit Camp Humphreys instead of DMZ during S. Korea trip 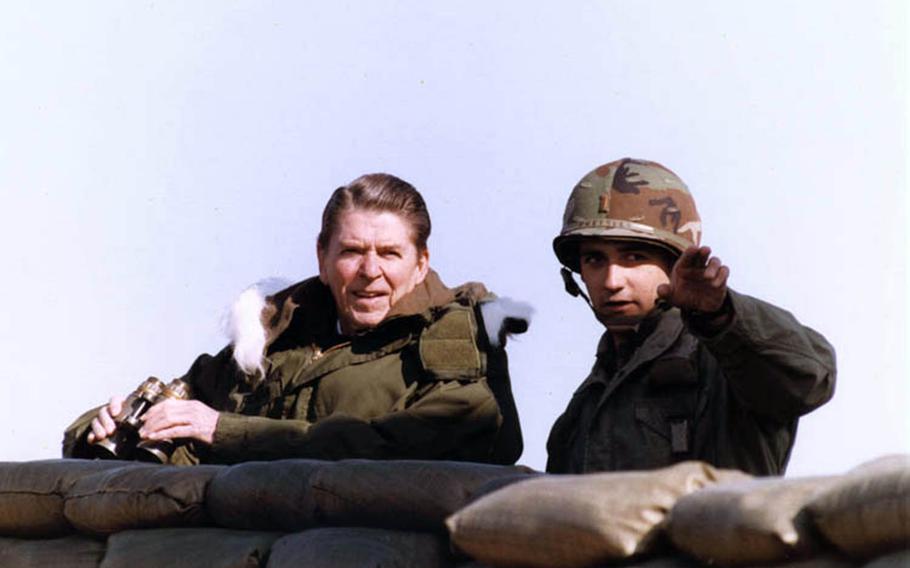 President Ronald Reagan looks out at North Korea during a visit to the Korean Demilitarized Zone on Nov. 13,1983. (Courtesy of USFK)

President Ronald Reagan looks out at North Korea during a visit to the Korean Demilitarized Zone on Nov. 13,1983. (Courtesy of USFK) 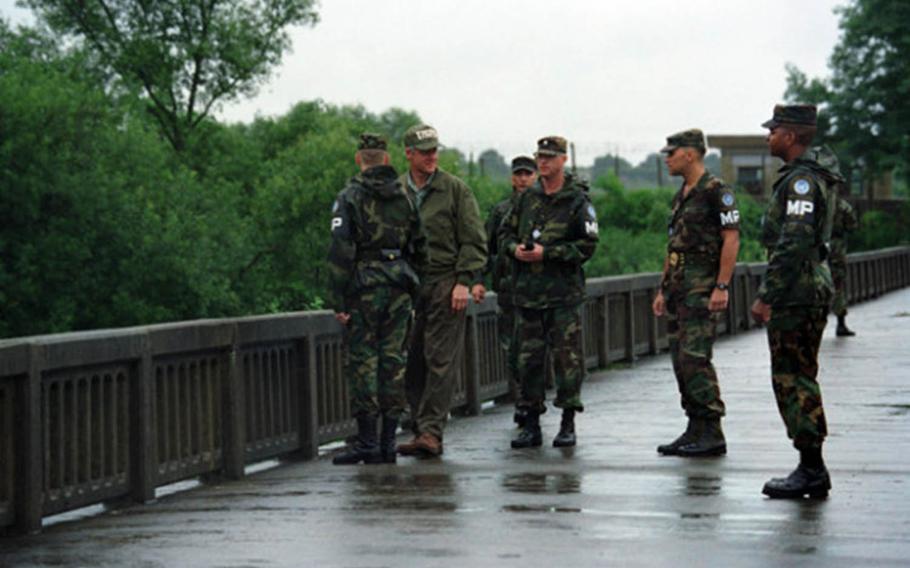 President Bill Clinton talks to soldiers on the Bridge of No Return during a visit to the Korean Demilitarized Zone on July 11,1993. (Courtesy of USFK) 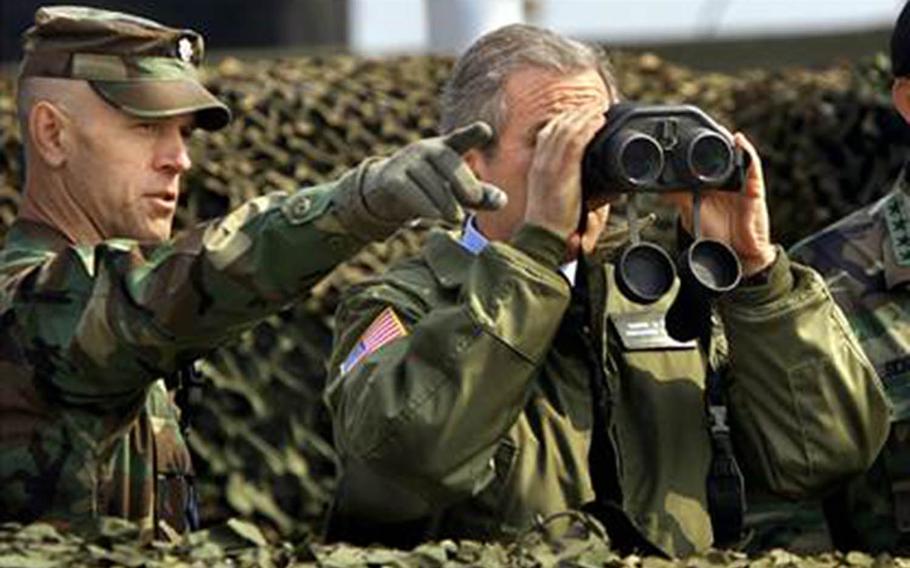 President George W. Bush looks through binoculars at North Korea during a visit to the Demilitarized Zone on Feb. 20, 2002. (Courtesy of USFK) 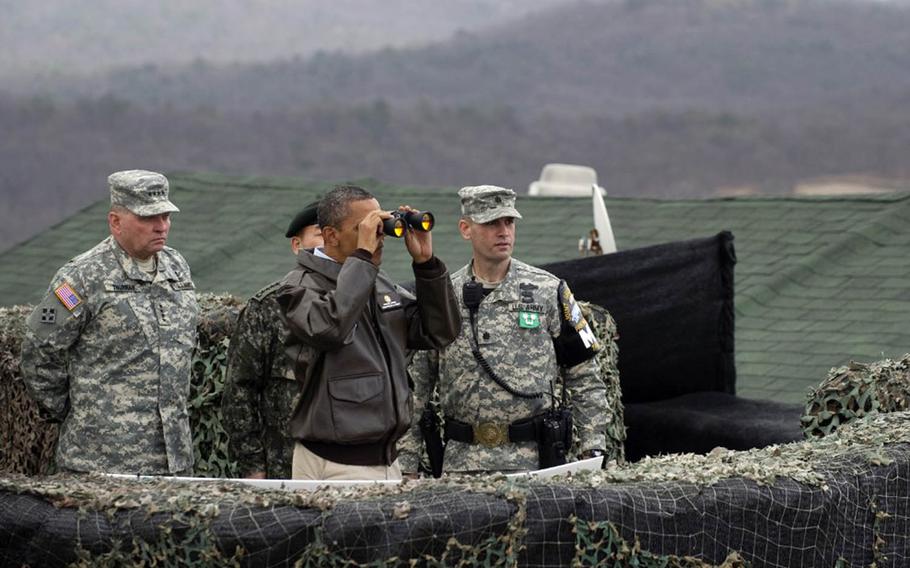 President Barack Obama looks through binoculars at North Korea during a visit to the Demilitarized Zone on March 25, 2012. (Courtesy of USFK) 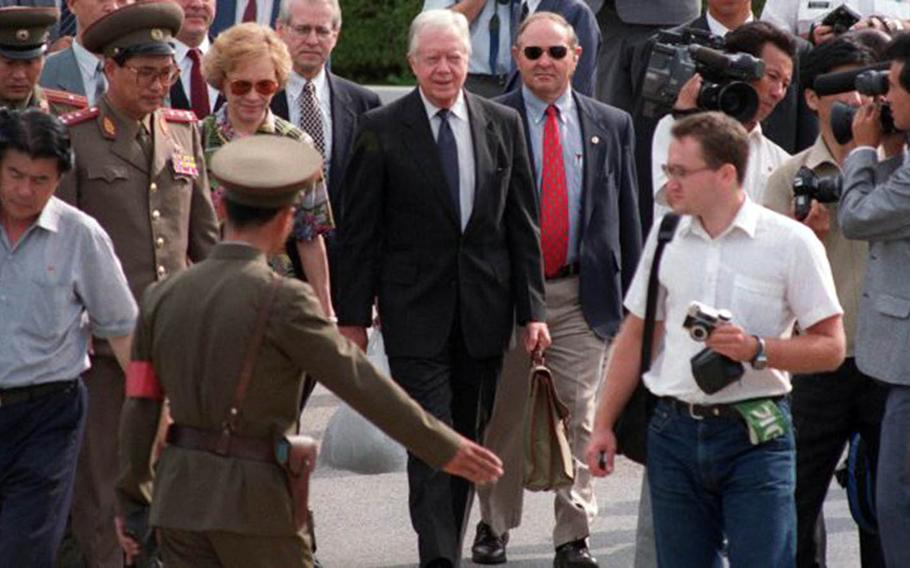 SEOUL, South Korea – President Donald Trump is likely to visit a U.S. military base south of Seoul instead of the tense border area that divides the peninsula during his trip to South Korea next month, the White House said.

That would make him only the second sitting president not to travel to the Demilitarized Zone since Ronald Reagan started the tradition of touring the area in 1983.

Trump has heightened his rhetoric in a war of words with North Korea in recent months as the communist state defiantly pursued its nuclear weapons program despite U.N. sanctions and diplomatic pressure against it.

The president has dubbed North Korean leader Kim Jong Un “Little Rocket Man” and threatened to “totally destroy” the communist state if forced to defend the United States and its allies.

That led many observers to speculate that he would make the customary stop at the DMZ, which is frequently on the agenda for visiting senior officials. Vice President Mike Pence, wearing a bomber jacket, went in April, saying he wanted the North Koreans to “see our resolve in my face.”

South Korea’s Yonhap News Agency also reported that the White House had sent an advance team to inspect the area.

But a White House official told reporters Monday in Washington that South Korean President Moon Jae-in has invited Trump to visit Camp Humphreys and the president probably won’t have time to do both during his Nov. 7-8 visit.

The official rejected the idea that the decision was made because of security concerns and suggested that plans could still change, according to The Associated Press.

Trump is also expected to hold a summit with Moon and to give a speech to the National Assembly in South Korea, one of five stops on his first presidential trip to Asia.

Camp Humphreys, about 40 miles south of Seoul, has been the focus of a massive expansion as the Army garrison is slated to become the main headquarters for U.S. Forces Korea as part of a long-delayed relocation plan. Already the 8th Army headquarters has moved there from its previous home in Seoul.

The DMZ, a 2.5-mile-wide, 150-mile-long buffer zone that’s dotted with land mines and lined with barbed wire, is about 35 miles north of the South Korean capital.

Visiting officials are usually photographed at the Joint Security Area in the truce village of Panmunjom, and the spot has even become a popular tourist destination, with coin-operated binoculars providing a view across the 38th Parallel.

Ronald Reagan became the first sitting president to visit the DMZ in 1983, followed by Bill Clinton in 1993, George W. Bush in 2002 and Barack Obama in 2012. George H.W. Bush went when he was a vice president but not during his presidency.

Past presidents have generally avoided the high-profile JSA, where North Korean soldiers can come close enough to film dignitaries on the other side of the Demarcation Line.

Instead they are usually photographed peering at the North through binoculars, flanked by U.S. military officers, and meeting with soldiers at the U.N. base in the area.

Clinton was the only one to go the JSA. He also walked to the middle of the Bridge of No Return, USFK said.

The U.S. maintains about 28,500 servicemembers in the South, which remains technically at war with the North after the 1950-53 conflict between the two countries ended with an armistice instead of a peace treaty.