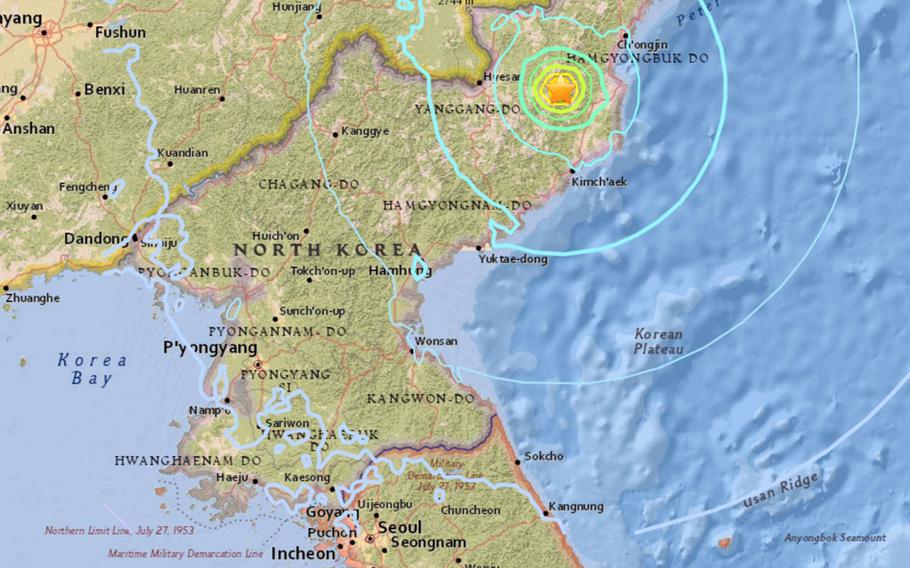 This map released by the U.S. Geological Survey shows the location of a 6.3-magnitude "explosion" 24 km east-northeast of Sungjibaegum, North Korea, Sunday, Sept. 3, 2017. (Courtesy of USGS)

The blast was the first since Trump took office, dramatically raising the stakes in the standoff over its stated goal of developing a nuclear weapon that could reach the U.S. mainland.

“North Korea has conducted a major Nuclear Test,” Trump wrote in a series of tweets. “Their words and actions continue to be very hostile and dangerous to the United States.”

He also called the North “a rogue nation” and “a great threat and embarrassment to China,” referring to efforts to get Beijing to do more to rein in its communist ally.

China, he said, “is trying to help but with little success.”

Trump also signaled a rift with staunch ally South Korea, whose president took office on May 10 promising to pursue a peaceful approach with the North only to see his efforts consistently stymied.

“South Korea is finding, as I have told them, that their talk of appeasement with North Korea will not work, they only understand one thing!” he wrote.

Trump has bounced between warning he would meet the North’s threats with “fire and fury” and urging a diplomatic solution as the growing threat from Pyongyang has emerged as one of his top security challenges.

His latest statements came hours after South Korean President Moon Jae-in vowed to seek stronger sanctions and to discuss with Washington the deployment of “the strongest strategic assets,” according to his office.

“I strongly condemn the latest provocation, which is a clear violation of [U.S. Security Council] resolutions and a serious challenge to the peace and security of the world,” he said at the start of a National Security Council meeting. “I cannot help but feel disappointed and angry.”

"North Korea has committed an absurd strategic mistake that will further accelerate its isolation from the international community,” he added, according to a transcript from his office.

‘Perfect success'North Korea has conducted five other nuclear tests since 2006, including two last year, and researchers had warned it was poised to carry out a sixth at any time. The most recent was nearly a year ago and was timed to coincide with the Sept. 9 anniversary of the founding of the communist state.

North Korea’s most famous TV anchor, Ri Chun-hee, excitedly said in a live broadcast that leader Kim Jong Un had signed off on Sunday’s test, while the Korean Central News Agency issued an unusually fast report in English calling it a “perfect success.”

“The H-bomb test was carried out to examine and confirm the accuracy and credibility of the power control technology and internal structural design” that would allow the weapon to be loaded onto an intercontinental ballistic missile, the state-run news agency reported.

It stressed there was no “leakage of radioactive materials nor did it have any adverse impact on the surrounding ecological environment.”

Japanese and South Korean officials also confirmed the test, which took place nearly a year after the last one was conducted. The date hands Kim a propaganda victory ahead of the 69th anniversary of the Sept. 9 founding of the nation by his grandfather.

Claims about the type of weapon and the lack of leakage could not be independently verified. Earlier Sunday, KCNA released photos of Kim inspecting a silver, peanut-shaped device it said was a homemade thermonuclear weapon with “super explosive power.”

The blast had a magnitude of 5.7, according to South Korea’s weather agency and military officials. The Korea Meteorological Administration estimated that the blast yield was between 50 and 60 kilotons, which would be about five times stronger than the Sept. 9, 2016, test.

It also was a slap in the face to China, North Korea’s economic lifeline and sole major ally, which has been criticized for failing to rein in its communist protégé. Tremors from the test, which was conducted in the mountainous Punggye-ri site, were felt as far away as China, local media reported.

The Chinese government "expressed firm opposition and strong condemnation,” according to a statement from the foreign ministry. It urged North Korea to "stop taking erroneous actions that deteriorate the situation."

Pyongyang also said last year that it had tested a hydrogen bomb in January 2016 and showed off what it called a miniaturized nuclear weapon. That claim was met with widespread skepticism, but the North has shown significant progress in its nuclear weapons program since then.

The communist state test-fired two ICBMs in July and sent another missile soaring over Japan earlier this month, defiantly persisting with its efforts despite U.N. economic sanctions and warnings from the U.S. that military options are on the table.

The U.S. sent a pair of supersonic B-1B bombers and four state-of-the-art stealth F-35B fighter jets over the Korean Peninsula on Thursday in a show of force it said was an unprecedented combined maneuver that included a bombing drill.

That followed annual U.S.-South Korean war games that always infuriate the North, which considers them a rehearsal for an invasion.

What’s next?Years of sanctions and diplomatic pressure have failed to curb the North’s ambitions, which it says are for defensive and deterrent purposes.

Trump stated earlier this month that he would unleash “fire and fury” against the North and said the military was “locked and loaded” as the two sides engaged in a war of words, with Kim eventually putting on hold a threat to fire missiles into the waters near the U.S. territory of Guam.

But Trump also has said he would be willing to talk to Kim under the right conditions.

Secretary of State Rex Tillerson also has continued to press for a resumption of long-stalled talks with the North. Even military commanders have expressed hope diplomatic action could work while stressing they’re preparing military options for the president.

John Delury, an associate professor at Yonsei University in Seoul, said the usual shows of force by the Trump administration and allies have not been effective and he believes it’s time for negotiations.

“The North Koreans are setting the tempo and basically have been all year,” he said in a telephone interview.

Delury dismissed concerns that tensions could erupt into conflict.

“I don’t think we’re at that point even in Trump’s most aggressive posture because this is not an attack; it’s not the first nuclear test,” he said. “They’re always working to increase their leverage should any negotiations start, and we’re basically doing the same.”

Complicating the situation are concerns about cracks in the alliance between the U.S. and South Korea, which have stood together since the 1950-53 Korean War ended with an armistice instead of a peace treaty. The U.S. maintains some 28,500 servicemembers in South Korea.

But Trump has suggested he’d be willing to change the arrangement, including remarks during his presidential campaign that Seoul should be paying more for its own defense.

He also said at one point that the South should pay $1 billion for an advanced U.S. missile-defense system known as THAAD that is being deployed on the peninsula to counter the growing threat from the North.

Trump and Moon stressed their “ironclad commitment” to the alliance when they met at a summit in late June in Washington.

But Trump’s tweet on Sunday suggests he’s frustrated with Moon’s softer approach toward the North.

The U.S. president also is reportedly considering triggering a withdrawal from a free-trade agreement with the South, according to The Associated Press.

Stars and Stripes reporter Aaron Kidd contributed to this report.