Trump administration says it has intelligence that China offered bounties for US troops in Afghanistan, report says 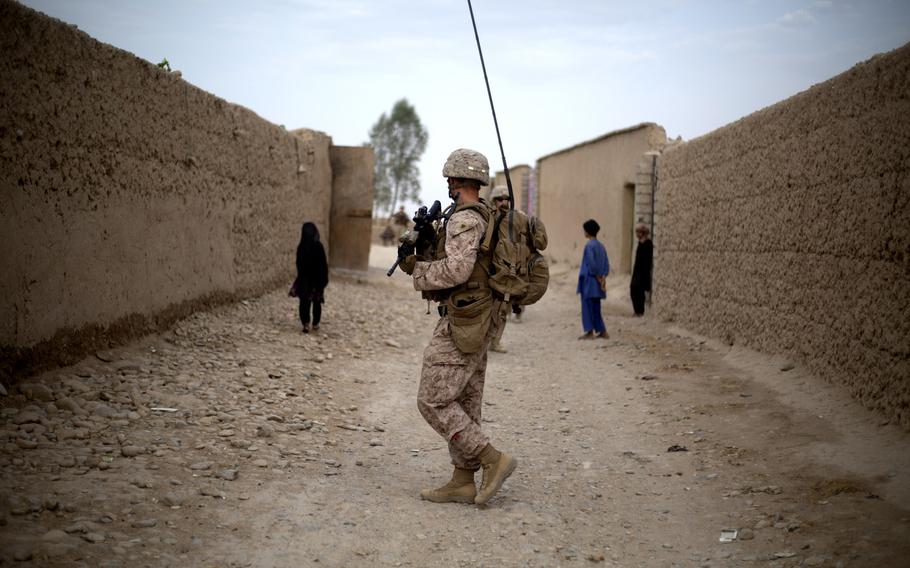 A U.S. Marine with Task Force Southwest moves through a village during a patrol near Bost Kalay, Afghanistan, in June 2018. The Trump administration says it has intelligence that China offered to pay militants in Afghanistan to attack American troops, but unnamed government officials are dismissing the evidence against Beijing as "very thin," U.S. media reports published in December 2020 say. (Sean J. Berry/U.S. Marine Corps)

“Administration officials across multiple agencies are currently working to corroborate the initial intelligence reports,” which is in the process of being declassified, the Axios news website, which broke the story, reported Wednesday.

But the intelligence the administration claims to have was “thinner even than reports that Russia offered payments to the Taliban to target U.S. and coalition troops, which were never corroborated,” another news website said, citing an unnamed government official.

A report in The New York Times in June claimed a Russian military spy unit offered bounties to Taliban-linked militants to attack coalition forces in Afghanistan, including U.S. and British troops.

Days after that report was released, Trump dismissed it as “possibly another fabricated Russia Hoax” and said the information wasn't credible. In July, Defense Secretary Mark Esper told House lawmakers that Pentagon intelligence agencies had not corroborated the reports.

But now that Beijing faces the same accusations as Moscow did six months ago, the outgoing administration is handling the allegations “very differently,” wrote Politico reporter Lara Seligman.

In addition to briefing the president on the matter, O’Brien convened a National Security Council Policy Coordination Committee to discuss it on Dec. 22, Seligman wrote, citing an unnamed administration official.

“The U.S. ‘treats this intelligence with caution, but any intelligence or reports relating to the safety of U.S. forces is something we take very seriously,’” the official was quoted as saying.

The allegations, which were made just three weeks before Trump leaves office, were out-of-character for China, which “has long played a quiet diplomatic role in Afghanistan,” Axios reporters Jonathan Swan and Bethany Allen-Ebrahimian said.

“If this intelligence were to be confirmed, it would represent a dramatic strategic shift for China, and sharply escalate tensions between China and the U.S.,” they wrote. “If the intelligence does not prove accurate, it raises questions about the motivations of the sources behind it as well as the decision to declassify it.”

Beijing made the alleged offer to pay bounties for attacks on U.S. troops “some time after late February when the U.S. struck its deal with the Taliban,” Axios cited a senior U.S. official as saying.

There have been no U.S. combat deaths in Afghanistan since the Feb. 29 deal was signed.