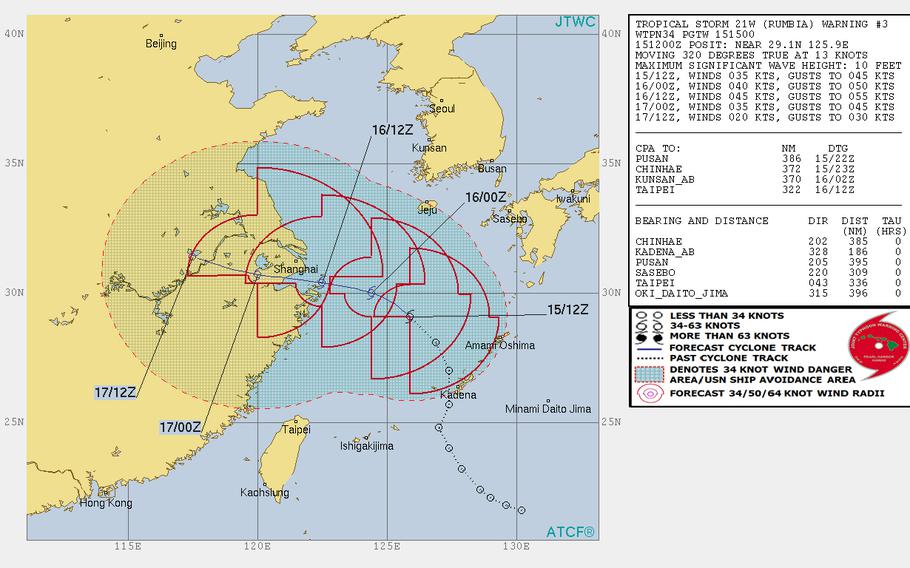 Midnight Wednesday, Aug. 15, Japan time: Rumbia wasted little time, a little less than a day, strengthening into a tropical storm, having been upgraded at mid-evening Wednesday by the Joint Typhoon Warning Center.

While heavy rain bands remain in trail behind Rumbia’s center, the roughest of winds are well northwest of Okinawa, headed toward east China, with landfall forecast for early Friday morning just south of Shanghai.

Barring a sudden change in track taking it closer to Japan or Korea, this is the final report on Tropical Storm Rumbia.

5:30 p.m. Wednesday, Aug. 15, Japan time: Heavy rains continue to lash the island as Rumbia keeps rumbling northwest of Okinawa. It remains on course to make landfall south of Shanghai early Friday morning, according to the Joint Typhoon Warning Center's latest forecast track. At 3 p.m., Rumbia was 123 miles northwest of Kadena Air Base, headed north-northwest at 14 mph holding steady at 35-mph sustained winds and 46-mph gusts. If Rumbia keeps on its present course, it is forecast to curve west, crashing ashore as a middling tropical storm, 52-mph sustained winds and 63-mph gusts, just south of Shanghai at 2 a.m. Friday local time. Many have made comparisons to previous tropical cyclones that have assaulted Okinawa and wondered why no accelerated Tropical Cyclone Conditions of Readiness, considering the heavy winds and rain squalls. It's entirely about the presence (or absence) of destructive winds. Military and Japanese forecasts do not project destructive winds of 58 mph or greater to hit the island during this weather event. Heavy rain has zero to do with issuing of TCCORs. It's all about wind. Thus, for the moment, U.S. bases on Okinawa remain in seasonal TCCOR 4.Stay tuned, however; it is weather, and weather can change for the worse at any time.1 p.m. Wednesday, Aug. 15, Japan time: This new tropical depression, which formed right over Okinawa early Wednesday morning, won’t be much of a wind event where the island is concerned. But a rain event? That heavy rain squall that dumped more than an inch in an hour at mid-morning Wednesday? Kind of like that.

But there are quite a few rainbands and squalls trailing the center of 21W, which should make the rest of the week quite damp. Showers and thunderstorms, some heavy at times, should dot the forecast through Friday.

U.S. bases remain in seasonal Tropical Cyclone Condition of Readiness 4. 21W is not forecast to cause destructive winds on Okinawa.