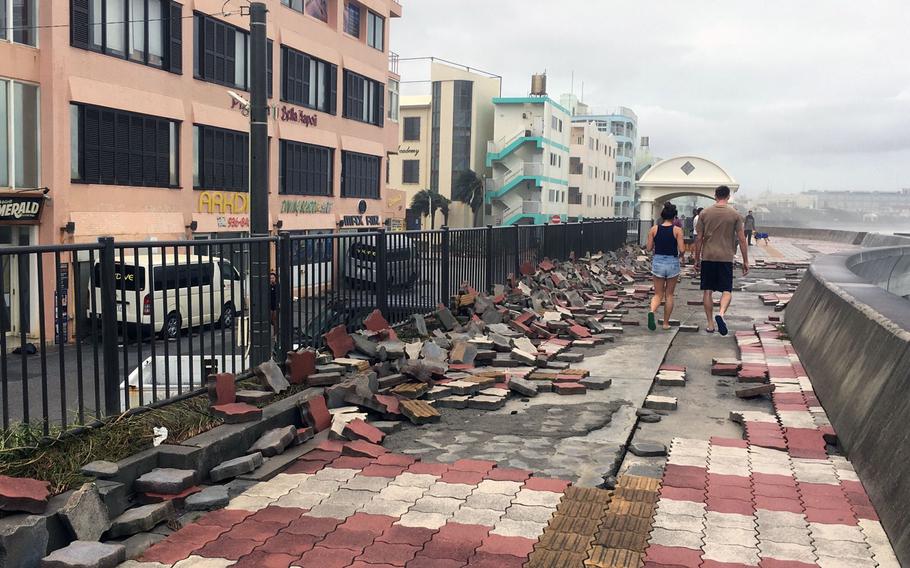 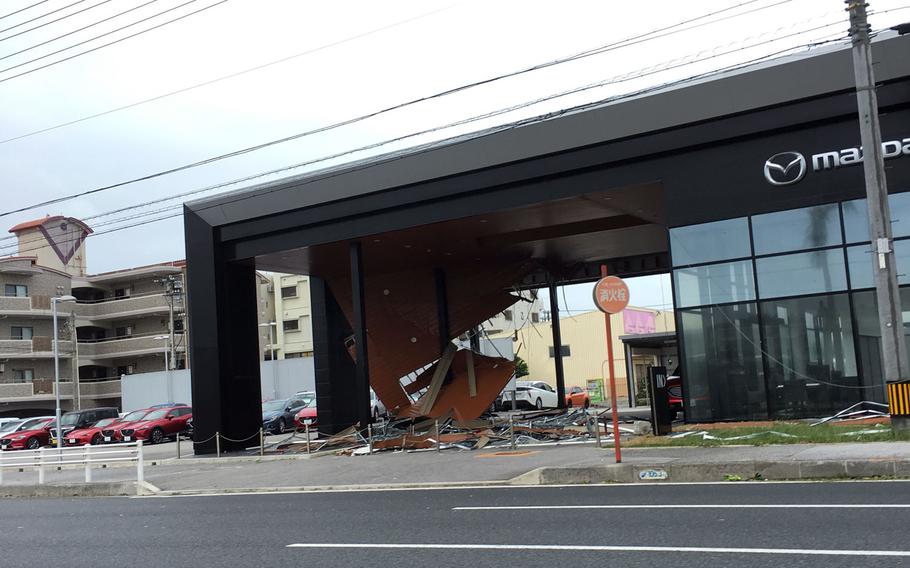 Buy Photo
The roof of a car dealer in Chatan, Okinawa was damaged in Typhoon Trami over the weekend. Trami, the 28th numbered storm and fifth super typhoon of the season, battered Okinawa with 103-mph sustained winds and 132-mph gusts overnight Saturday into Sunday morning. (Aya Ichihashi/Stars and Stripes)

YOKOTA AIR BASE, Japan — The worst typhoon to hit Okinawa in six years left thousands without power, canceled hundreds of flights and stranded tens of thousands of passengers over the weekend and now turns its attention to the Kanto Plain, where it’s forecast to hit Sunday night.

Images received by Stars and Stripes from around the island revealed devastation of all sorts: Flooding caused by storm surge along the coastline, damaged vessels, overturned vehicles, trees, power lines and branches blown down and buildings damaged and collapsed.

No deaths were reported, but at least 52 people were injured as the storm passed. Okinawa’s electric authority said power had been lost to more than 250,000 homes and more than 200,000 were still without electricity and water as of 10:46 a.m. Sunday.

At mid-morning Sunday, Trami was accelerating northeast, skimming the south coasts of Kyushu and Shikoku Islands.

Accelerated levels of tropical cyclone readiness were issued at Iwakuni and Sasebo Naval Base, where Trami was due to pass at mid-day. U.S. bases in the Kanto Plain were also on high alert, with the storm forecast to roar by overnight Sunday into Monday.

Scores of flights serving major airports on Japan’s main islands had already been canceled. ChannelNewsAsia.com reported that Kansai Airport, serving the Osaka-Kyoto-Kobe metroplex, would shut down its two runways at mid-morning as a precaution.

West Japan Railway said it would suspend all service in the Osaka region and shut down service on the Tokaido and Sanyo branches of the high-speed Shinkansen at noon Sunday.

All this comes on the heels of a country still reeling from one of the hottest summers on record, deadly rains that inundated central and western Japan, the strongest typhoon to hit the region in 25 years in Typhoon Jebi and a magnitude-6.6 earthquake on Hokkaido that killed 40.

Stars and Stripes correspondent Aya Ichihashi contributed to this report.ornauer.dave@stripes.com