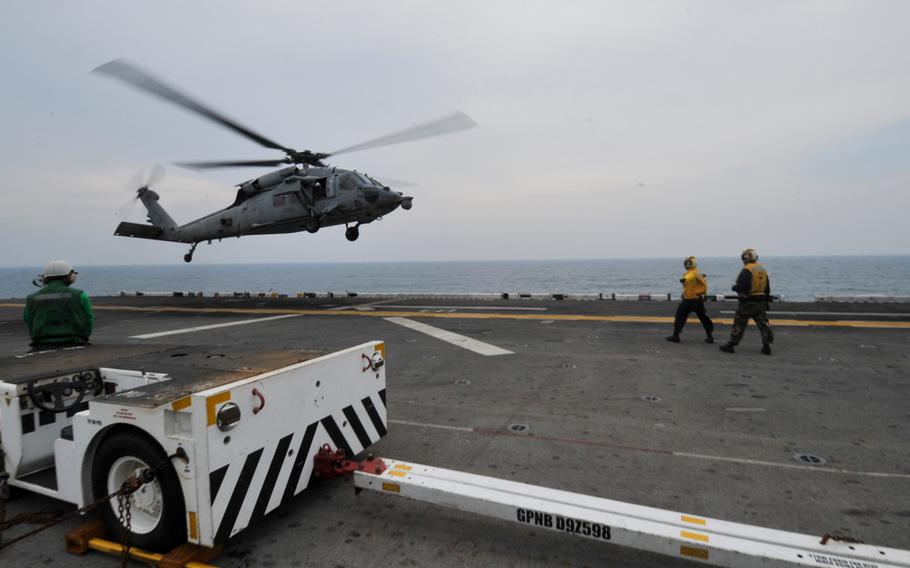 A MH-60 Sea Hawk helicopter takes off from the flight deck of the Bonhomme Richard to assist in search and rescue operations for the sunken ferry Sewol in South Korean waters, April 20, 2014. (Adam D. Wainwright/U.S. Navy)

SEOUL — A few weeks ago, U.S. and South Korean forces trained together in one of their largest-ever amphibious landing exercises – one of more than two dozen naval drills that take place between the two militaries each year.

Now, some of the same troops are finding themselves working side by side in the search for missing passengers of a sunken ferry off South Korea’s southwestern tip.

Two MH-60 helicopters, a U.S. Marine MV-22 and a UH-1Y Huey operating off the USS Bonhomme Richard are participating in search efforts in an area about 5-15 nautical miles from the Sewol, according to Commander, Naval Forces Korea.

As of Monday afternoon, the bodies of 64 passengers had been recovered, leaving nearly 240 people — many of them high school students — unaccounted for.

The Bonhomme Richard, an amphibious assault ship based in Sasebo, Japan, was conducting routine maritime operations in the Yellow Sea following recent U.S.-South Korea exercises when the ferry issued a distress signal shortly before 9 a.m. on April 16.

A spokesman for South Korea’s Ministry of National Defense said Monday that there are no plans for the Bonhomme Richard to leave the area and he did not know if additional U.S. military assets would be involved in the search. He said the Bonhomme Richard may be looking for bodies that have been washed away from the ferry while South Korean personnel focus on the ferry itself.

The Bonhomme Richard’s commanding officer wrote in a message posted Sunday on Facebook that 127 vessels were taking part in the South Korean-led rescue efforts, and 560 South Korean divers were battling strong currents and cold water as they tried to reach the Sewol’s passenger compartments.

“From the very moment we got the word of the ferry mishap — everyone has really gone above and beyond to bring help where it was needed,” Capt. Joey “JT” Tynch wrote.

His post said the ship was positioned about 25 nautical miles (about 29 miles) from the accident site, and South Korean aircraft were dropping illumination flares at night so work could continue around the clock.

“This follows the very detailed planning and operations we conducted with these same units during Ssang Yong last month,” he said, referring to the March 27-April joint amphibious landing exercise.