Tours to truce village on border with North Korea to resume 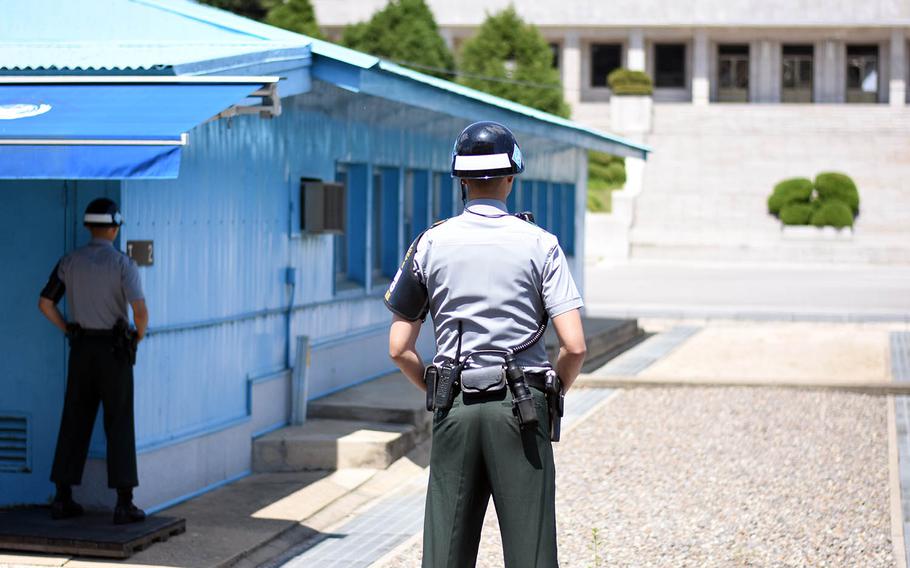 Buy Photo
South Korean soldiers stand guard near the border with North Korea inside the Joint Security Area, May 24, 2017. (Aaron Kidd/Stars and Stripes)

OSAN AIR BASE, South Korea — Public tours to the Joint Security Area at the Demilitarized Zone between North and South Korea will resume on Monday, U.N. Command said Wednesday, more than four months after general access was suspended due to the coronavirus pandemic.

The command coordinated with South Korea’s Ministry of Unification to resume tours for South Koreans and international citizens, according to a statement released by the command.

The South Korean government agreed to restart the tours provided its social distancing level fell and U.S Forces Korea lowered its health protection condition level to Bravo across the country, a USFK spokeswoman, Song Hochong, said Thursday in an email to Stars and Stripes.

Tours at Panmunjom, the truce village at the center of the 155-mile-long DMZ, will resume as before, but will be limited to 20 visitors at a time, half the number before the suspension was imposed Dec. 20.

Popular attractions include the main building known as the Freedom House, the blue conference room where the armistice was signed in 1953, the tree that was planted by President Moon Jae-in and North Korean leader Kim Jong Un in 2018 and the footbridge where they had a private discussion.

Kim and former President Donald Trump shook hands between two of the site's iconic blue buildings during a historic impromptu meeting in July 2019, during which Trump stepped across the border to become the first sitting U.S. president to visit North Korea.

The site has been closed 16 of the past 18 months.

South Korea suspended tours in October 2019 after nearly a dozen cases of the swine flu were discovered near the tense border. Tours resumed in November for two months before coronavirus mitigation measures forced another suspension.

Unlike the graduated restart in November, which first permitted South Korea residents to sign up for the tour, this restart includes all personnel affiliated with USFK, Song said.