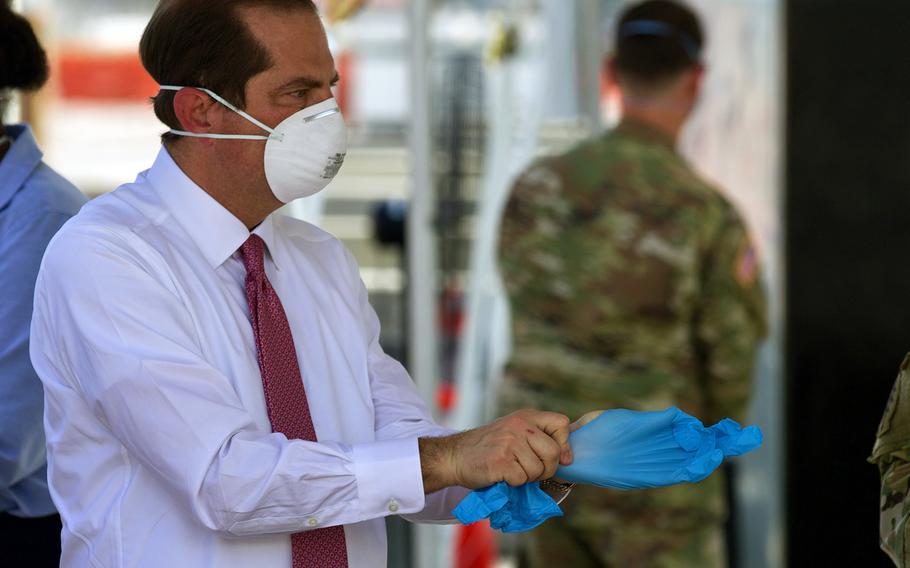 Secretary of Health and Human Services Alex Azar puts on protective equipment before joining the Florida National Guard for a tour of a coronavirus-testing site in Jacksonville, Fla., May 22, 2020. (Michael Baltz/U.S. Army)

Health and Human Services Secretary Alex Azar, the most senior U.S. official to visit Taiwan since 1979, blasted China’s handling of the coronavirus pandemic during a media teleconference this week.

The communist country’s lack of transparency and failure to contain the virus within its borders contrasts with the way the United States and Taiwan are handling the disease, he told reporters Wednesday.

In an open society, Azar said, public health authorities would have shared information on the coronavirus with the public and medical professionals.

China has been accused of censoring whistleblowers like Li Wenliang, a physician who sought to raise the alarm after noticing the virus in a Wuhan hospital in mid-December, according to the BBC. The government eventually locked down the city and other parts of Hubei province for two months to slow the disease’s spread.

The U.S. government was also criticized for lack of transparency after transferring the collection of hospital virus data from the Centers for Disease Control and Prevention to a private technology firm in July.

The U.S. has so far confirmed more than 5 million coronavirus cases and 162,000 deaths due to the coronavirus, according to the CDC. Taiwan, home to nearly 24 million people, has had 480 cases and seven deaths. China has reported just over 89,000 infections and almost 5,000 deaths, according to Johns Hopkins University.

Taiwan, which had experience dealing with the Severe Acute Respiratory Syndrome in 2003, started screening arrivals from mainland China early in the pandemic, set up a national command center to handle its response and has regularly disseminated information about the virus to the public, CNN reported last month.

Taiwan has been a model of compliance on information sharing, Azar told reporters Wednesday.

“My message and visit are focused on the deep partnership and friendship between the U.S. and Taiwan,” he said. “It’s a vibrant, democratic, transparent and open society [and] a model of healthcare transparency.”

That contrasts with the conduct of China’s Communist Party, Azar said.

China’s Foreign Ministry spokesman, Lijian Zhao, told reporters Wednesday that the U.S. is making China a scapegoat for its own failure in handling the pandemic.

“Secretary Azar, I’m afraid, is directly responsible for the unchecked spreading of the epidemic in the U.S.,” Zhao said, according to a transcript of his remarks. “We wonder why he is so blatant to even speak ill of China’s anti-epidemic efforts. If he entered a world competition of ‘who performed the worst in managing this epidemic,’ he will almost surely come out on top.”

Azar said Taiwan’s example could serve in the World Health Organization, but China’s Communist Party has bullied and blocked Taiwan from having observer status there.

The Trump administration, critical of the WHO’s handling of the pandemic, formally notified the United Nations on July 6 of its withdrawal from the organization, although the move won’t happen until next year, The Associated Press reported July 8.

“Back in April, Taiwan donated face masks and protective equipment to the United States,” Azar said. “They did so even at a time when they were asking their own people to limit their use of face coverings because of the shortage of supply. It was quite touching that Taiwan would have been so generous to the United States and others in the world.”

Azar’s visit, which included a meeting Monday with Taiwanese President Tsai Ing-wen, is likely to rile China, which regards Taiwan as its territory. The U.S. under its One China policy recognizes Beijing’s sovereignty over Taiwan but regards its future as unsettled.

Asked Wednesday about Azar’s visit, Zhao said China opposes official exchanges between the U.S. and Taiwan under any pretext. He warned Taiwan’s ruling Democratic Progressive Party that a “dead end will meet them” if they behave as “self-important puppets with strings in foreign hands.”