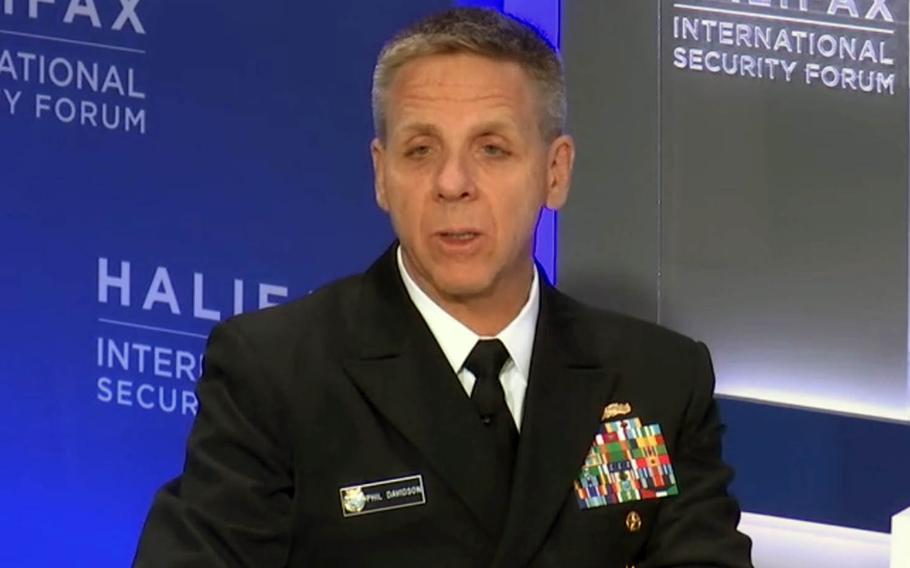 The demands of protesters in Hong Kong echo the values of America’s vision of a “free-and-open Indo-Pacific,” the U.S. military’s top commander in the Pacific said Saturday.

“I think some of the challenges you’re seeing in Hong Kong today are reflective of the attributes and values that are represented in that free and open vision — that nations in the region want free societies, freely elected officials and the freedom to protect their own sovereignty and feel like they’re free from coercion,” said Adm. Philip Davidson, commander of U.S. Indo-Pacific Command, during a question-and-answer session at the Halifax International Security Forum in Nova Scotia, Canada.

“I think it’s the role of the Indo-Pacific command — within the military space — to help advance that vision for the whole of the region,” he said in a video of the talk posted online by the U.S. Defense Department.

Protests began in June in Hong Kong, a former British colony, over a bill proposed in April to make extradition easier to mainland China.

Great Britain turned Hong Kong over to China in 1997, but the city maintained a large degree of autonomy and held onto the judicial system established while a colony.

As the protests grew, the bill was officially withdrawn in October, but for many protesters that was too little, too late. Clashes between protesters and police intensified this month.

A landslide victory for pro-democracy candidates in Sunday’s district council elections in Hong Kong seemed to underscore the public’s grievance with how Hong Kong officials have handled the protests and their willingness to cede control to Beijing.

Last week, the U.S. House and Senate approved in nearly unanimous votes the Hong Kong Human Rights and Democracy Act, which would impose sanctions against Hong Kong and Chinese officials found responsible for human rights abuses, among other provisions.

President Donald Trump has said he might veto the bill, which would present Republicans with the difficult choice of whether to override it.

Davidson also spoke out about the treatment of ethnic Uighurs in western China, who have been imprisoned en masse in camps in an effort by Beijing to erase their connection with Islam.

“There’s no doubt in my mind that people around the world are watching the situation of the Uighurs who have been cast in concentration camps,” Davidson said.

He described China’s behavior as “abhorrent to the idea of the freedoms we’ve all fought for.”

Asked about the South China Sea — another flashpoint between the U.S. and China — Davidson said that the U.S. Navy’s so-called freedom-of-navigation operations there would “continue to pick up as our rotational access into Singapore and our continued basing in Japan allow us.”

Asked for an assessment of the likelihood of actual hostilities breaking out in the Pacific region in the coming year, Davidson demurred.

“I won’t comment in public on the risks there,” he said, then added with a laugh, “I think there’s good reason I’m employed.”