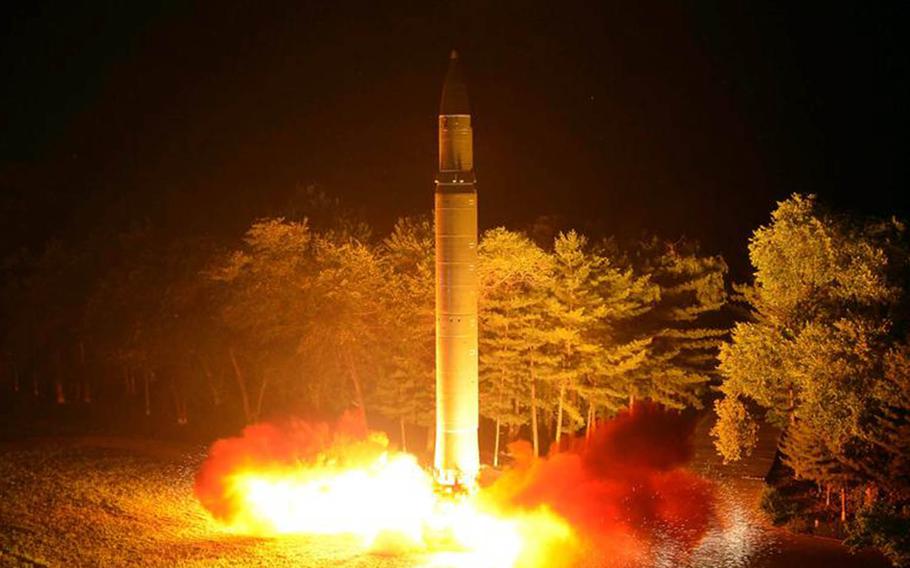 The United States must be prepared to shoot down North Korean missiles because “there is a chance they would actually fire [one] at us,” a top military officer said this week.

“North Korea is continuing to move forward in their capabilities, which means on the defensive side, we have to continue to move forward as well,” Air Force Gen. John Hyten, vice chairman of the Joint Chiefs of Staff, said Tuesday during a webinar hosted by the Center for Strategic International Studies think tank in Washington, D.C.

“Our national missile defense capability is clearly focused on North Korea right now,” he said, “not on China, Russia and Iran.”

The U.S. should continue to develop its ability to shoot down a North Korean long-range missile, Hyten said.

“There’s a chance they would actually fire it at us,” he said. “Therefore, we want the ability to shoot it down.”

North Korea has not tested any nuclear weapons or intercontinental ballistic missiles since late 2017, but short-range missile tests have continued, and the country’s biggest ICBM was displayed during a military parade in Pyongyang in October.

“We have to make sure that, as we go forward, we maintain the ability to deny the North Koreans the ability to effectively attack the United States with confidence,” Hyten said.

His views were echoed by Ralph Cossa, a former Air Force officer and president emeritus of the Pacific Forum think tank in Honolulu.

The likelihood that North Korea would fire a missile at U.S. territory or allies, while low, is considerably higher than a missile attack from China or Russia and, therefore, poses the greatest immediate threat, Cossa said Thursday in an email to Stars and Stripes.

“In terms of capability, of course, only Russia poses an existential threat to the US, having the capability of destroying us (and humanity) several times over (as do we),” he said. “The reason probabilities are low in all cases is our ability to massively retaliate.”

The U.S. demonstrated that offensive capability on Wednesday when a team of Global Strike Command airmen launched an unarmed Minuteman III ICBM from Vandenberg Air Force Base, Calif.

“The test demonstrates that the United States’ nuclear deterrent is safe, secure, reliable and effective to deter twenty-first century threats and reassure our allies,” the Air Force said in a statement that day.

American missile-defense systems are not designed to eliminate “strategic stability” with the Russians but rather defend against the single or smaller launch capability of North Korea or another more likely adversary, Cossa said.

“We would be hard pressed to defend against an all-out attack by the Russians or, most likely, against the Chinese since they could likely overwhelm our defensive systems,” he said.

China is clearly the missile threat to the U.S. and its allies in the Indo-Pacific region, according to Riki Ellison, founder of the Missile Defense Advocacy Alliance, which lobbies for missile defense, deployment and development.

“Chinese continued aggressive tactics in the South China Sea and recently escalation tactics towards Taiwan with different missile platforms cross all the domains is clear and apparent,” he said in an email Thursday.

However, there is no question that North Korea is the prime ICBM threat to the U.S., Ellison added.

It is not possible at all to defend the U.S. from China and Russian ICBMs, he said.

“The limited United States 44 ground-based interceptors are for North Korea only,” he said.