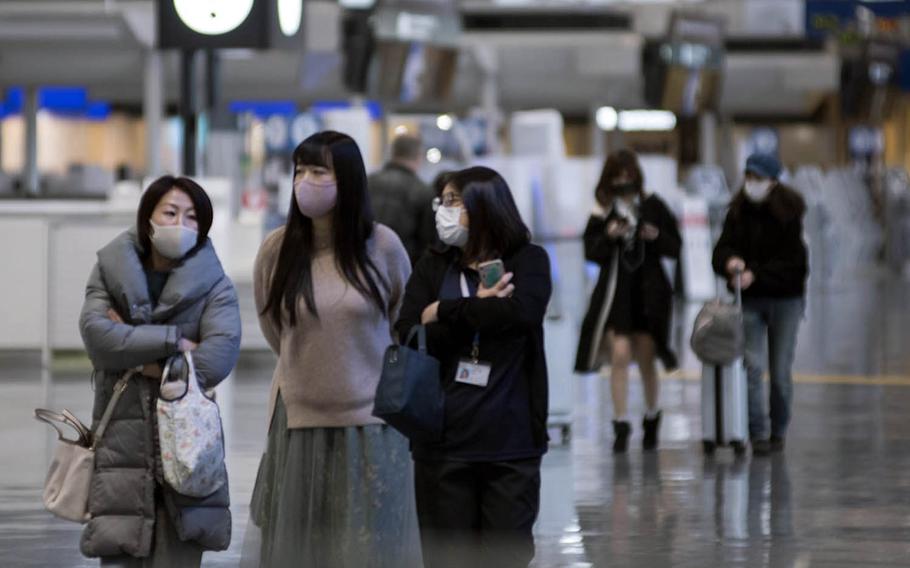 Totals early in the week are typically low because many testing facilities are closed over the weekend, but Monday’s figures represent the first tally below 700 since Dec. 28 and below 1,000 since Jan. 12, according to public broadcaster NHK and the Tokyo Metropolitan Government.

Three others, new arrivals to Japan, tested positive on the test required to exit quarantine, according to the base on Saturday.

The Marine Corps also reported one newly infected individual Monday at Camp Foster on Okinawa but provided no further information.

Kubasaki High School at Foster reopened Monday, nearly a week after it closed Jan. 19 to permit contact tracing and testing. Three people at the school had become infected, but subsequent tests of staff and students came back negative, according to Principal James Strait in a message to families and employees Monday.

Naval Air Facility Atsugi, about 25 miles southwest of central Tokyo, had one person test positive while in quarantine, base spokesman Sam Samuelson said on Monday.

In South Korea, a shelter-in-place, or lockdown, order at Yongsan Garrison in Seoul and for certain units at Camp Humphreys 55 miles to the south was extended to midnight Wednesday, USFK announced Monday.

Both bases have been under tight restrictions since Jan. 15, with the shelter-in-place order imposed Jan. 16 to stifle the spread of several cases linked to Yongsan and to permit widespread contact tracing.

On Sunday, Humphreys commander Col. Mike Tremblay closed the post exchange for a thorough cleaning after someone who tested positive stopped there, according to Tremblay’s remarks on a Facebook Live broadcast that morning. The exchange opened later that afternoon.

USFK reported five individuals tested positive at Kunsan Air Base and at Humphreys over the weekend.

Three service members at Kunsan who quarantined Wednesday after contact with another infected individual tested positive Friday, according to a news release.

At Humphreys, a Defense Department civilian employee tested positive Friday after developing COVID-19 symptoms; the other turned up Saturday during the stepped-up tracing campaign there, according to the Saturday release.

On Sunday, USFK reported 12 people tested positive after arriving in South Korea over a two-week period.

One service member landed at Osan Air Base on the Patriot Express, a government-chartered air passenger service, on Jan. 18. Nine service members and two dependents arrived on commercial flights at Incheon International Airport on Jan. 8-10, Jan. 18 and Wednesday, according to the Sunday release.

Five people tested positive upon their arrival and seven were positive on the test required before exiting the mandatory two-week quarantine.

South Korea reported 437 newly infected people nationwide on Sunday, according to the Central Disease Control Headquarters. Seoul accounted for 91 of those, and Gyeonggi province, where Humphreys is located, reported 72.