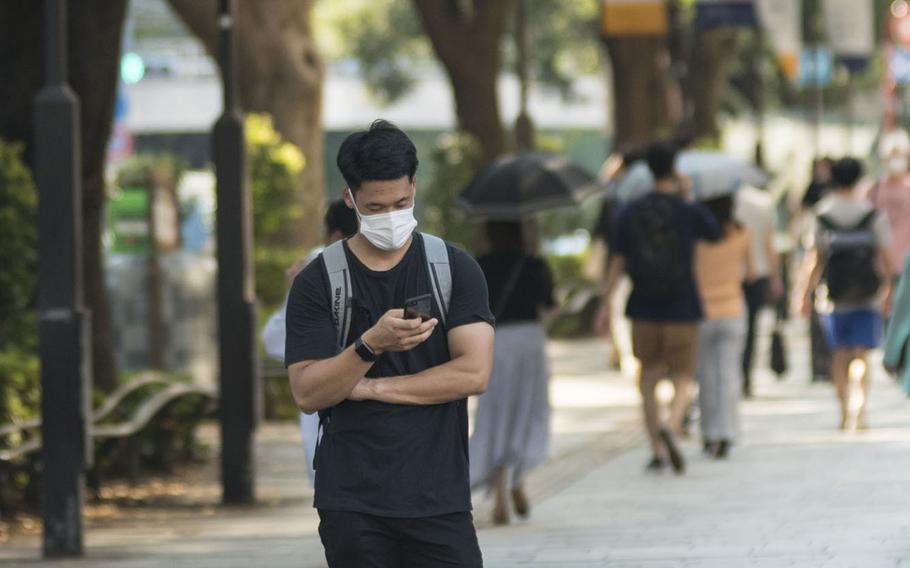 Buy Photo
A man stops to check is smartphone in the Omotesando area of central Tokyo, Aug. 14, 2020. (Akifumi Ishikawa/Stars and Stripes)

TOKYO — New coronavirus cases reported in Japan’s capital city fell below 100 on Monday for the first time since July, while U.S. military bases in the country announced just two infections.

The Tokyo Metropolitan Government reported 95 new cases, according to public broadcaster NHK. That brings the city’s pandemic total to 19,428 infections.

The number of new cases reported daily in the city fell from 258 on Friday to 212 on Sunday; the rolling seven-day average likewise fell from the most recent high, 275.3 on Thursday, to 231.3 on Sunday, according to data on the metro government’s website.

The greater Tokyo area is home to a handful of U.S. installations, including Yokosuka Naval Base, home of the 7th Fleet; Camp Zama, headquarters of U.S. Army Japan; and Yokota Air Base, headquarters for U.S. Forces Japan.

On Okinawa, home to the bulk of U.S. forces in Japan, the Marine Corps reported two new cases Monday morning. Both were discovered at Camp Courtney by testing people in quarantine, according to a Facebook post by Marine Corps Installations Pacific.

U.S. service members, civilian employees, contractors and family members waiting the required 14 days in quarantine after arriving in Japan must test free of the coronavirus before leaving isolation.

The Marines also reported nine more individuals had recovered and were ready to exit quarantine on Monday.

Okinawa prefecture, like Tokyo experiencing a surge that began July 8, reported 22 new cases Monday, along with 56 infections and two deaths from the weekend, according to a prefectural health officials and the prefecture’s website.

Okinawa Gov. Denny Tamaki on Friday said about 1,000 patients, or roughly 60% of the recent cases, have recovered, according to the prefecture’s website.

Tamaki on Aug. 15 extended an existing state of emergency for two weeks; it expires Saturday.

“Also, the new cases have been decreasing, as well, because of the joint effort of the local businesses and people of Okinawa,” according to a translation of Tamaki’s statements posted online. “I can say declaring the state of emergency worked effectively.”