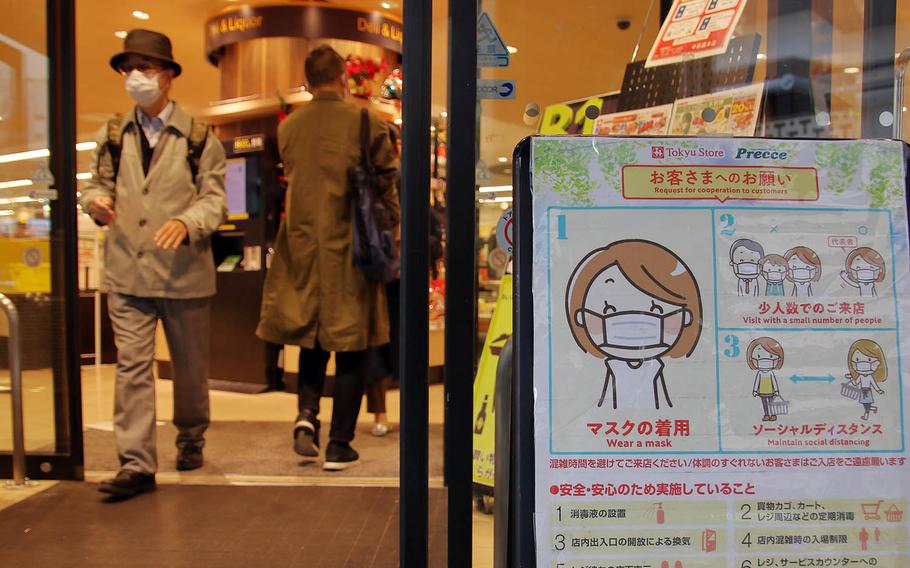 TOKYO — Japan’s capital city recorded more than 600 new cases of the coronavirus Thursday, the most confirmed there in one day during the pandemic thus far.

Meanwhile, the U.S. military in Japan and South Korea announced 14 new cases as of 6 p.m. Thursday, 10 of them new arrivals to the Korean Peninsula between Nov. 26 and Tuesday.

South Korea is also experiencing a surge and Wednesday reported 682 new infections nationwide, according to the Central Disease Control Headquarters. The nation’s largest cities, including Seoul, are mostly off-limits to U.S. troops and their families.

In Tokyo, the fall coronavirus surge is the most extreme of the three that have washed across the metro area this year. The city of 13.5 million has reported 45,529 people with the virus and 528 deaths during the pandemic.

About 40,000 patients have recovered, according to metro government data. The city accounts for a third of Japan’s 165,840 coronavirus patients and a fifth of its 2,420 deaths, according to the World Health Organization.

Tokyo is also off-limits to most U.S. personnel.

The U.S. Navy had two new coronavirus cases Wednesday in Japan at Sasebo Naval Base on Kyushu island, according to a Facebook post. One person tested positive after falling ill with COVID-19 symptoms; the second was discovered during contact tracing, the base said on Thursday.

“At this time, based on all of the evidence we have, there is no need for sweeping measures to prevent the spread of infection,” the base commander, Capt. David Adams, wrote Thursday on Facebook. “We are all hopeful that we are now closer to the end of this pandemic than its beginning, but now is not the time to let down our guard.”

U.S. Army Japan had one new coronavirus case on Okinawa, according to a news release Thursday. That person had contact with someone with the virus, tested positive on Saturday and then was quarantined.

Kadena Air Base, also on Okinawa, reported one newly infected person on Wednesday evening. That person, the fourth member of a family to test positive, was already quarantined, according to Kadena. No other close contacts were identified, according to a Facebook post.

Okinawa, where the bulk of U.S. forces in Japan are stationed, reported 129 new cases this week, including 46 on Thursday, a public health official told Stars and Stripes by phone.

To the north, U.S. Forces Korea reported all 10 of its recent cases tested positive after arriving in South Korea, according to a news release.

Four of those patients are service members who arrived at Osan Air Base on Sunday and Monday aboard the government-chartered Patriot Express passenger service. The others arrived on commercial flights at Incheon International Airport on Nov. 26 and 29 and Sunday, Monday and Tuesday.