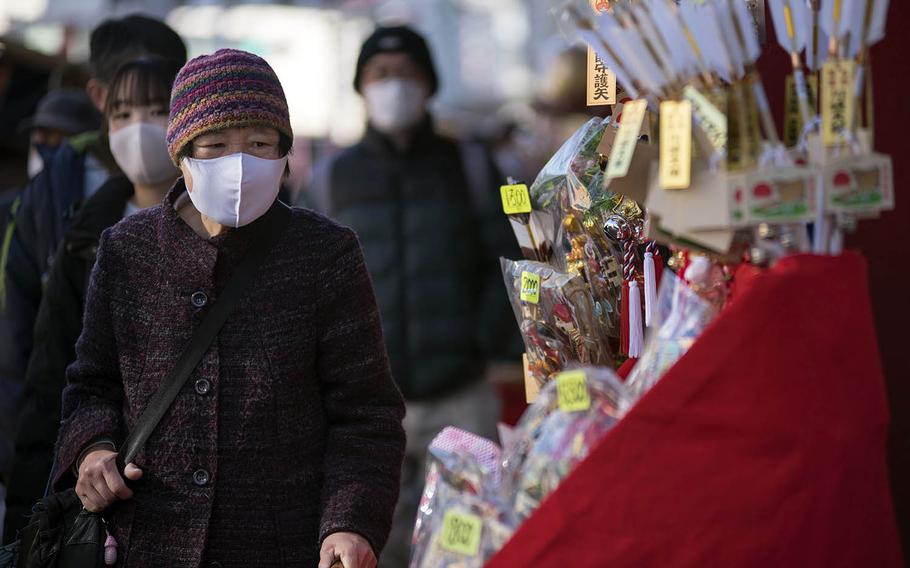 TOKYO – The number of new coronavirus cases reported daily in Japan’s capital city continued a descent Wednesday from a peak reached this month, while U.S. military commands in the country announced 48 fresh infections as of 6 p.m.

The Tokyo Metropolitan Government recorded 1,274 individuals with the coronavirus, according to public broadcaster NHK. While still high, that’s nearly 1,200 fewer new infections than the 2,447 recorded Jan. 7, according to metro government data.

The Tokyo metro area and three prefectures around it remain in a state of emergency, along with seven other prefectures, until Feb. 7.

Japan reported 6,034 new cases as of Tuesday, according to the World Health Organization.

Two Marine Corps bases on Okinawa had 33 people test positive for the virus – 32 at Camp Schwab and one at Camp Kinser – according to a Facebook post Wednesday.

U.S. Army Japan’s headquarters at Camp Zama, 26 miles from central Tokyo, said 13 people had tested positive in the week ending Wednesday, according to a news release. It did not specify their locations.

One tested positive after developing symptoms of COVID-19, the coronavirus respiratory disease; six were already quarantined as close contacts of another case; six were also in quarantine as new arrivals to Japan, according to the release.

In South Korea, the country’s largest U.S. military base eased a nearly week-old virtual lockdown on Wednesday after public health officials tracked down and isolated people linked to a recent cluster, the base commander said.

Army Col. Mike Tremblay, the commander of Camp Humphreys, said a “shelter-in-place” order imposed Saturday would be lifted in phases over 72 hours.

“A lot of people” were quarantined as a result of contact tracing over the weekend, Tremblay said during a Facebook Live video update Tuesday evening. “We have eliminated the spread from what we were worried about.”

Traffic through the post gates dropped from 53,000 to less than 10 during the lockdown, he said.

Tremblay said essential services such as the Child Development Center, banks, the post exchange and manned gyms would be open Wednesday; however, dining in at post restaurants is still prohibited.

Yongsan Garrison in Seoul, 55 miles to the north, remains under tight restrictions until midnight Sunday and is off-limits to most other U.S. personnel. Everyone on the installation will be tested for the coronavirus, according to an official Facebook post Wednesday.

“Supervisors and leaders will inform personnel at designated offices of dates and times of the required testing,” the message said.

Yongsan reported one more person tested positive for the coronavirus on Monday, a Defense Department civilian, according to a news release Tuesday. That person developed symptoms of COVID-19, according to the release. At least 20 people have become infected at Yongsan, most of them civilians.