Tokyo residents complain of lights and vibrations from Yokota-based Ospreys 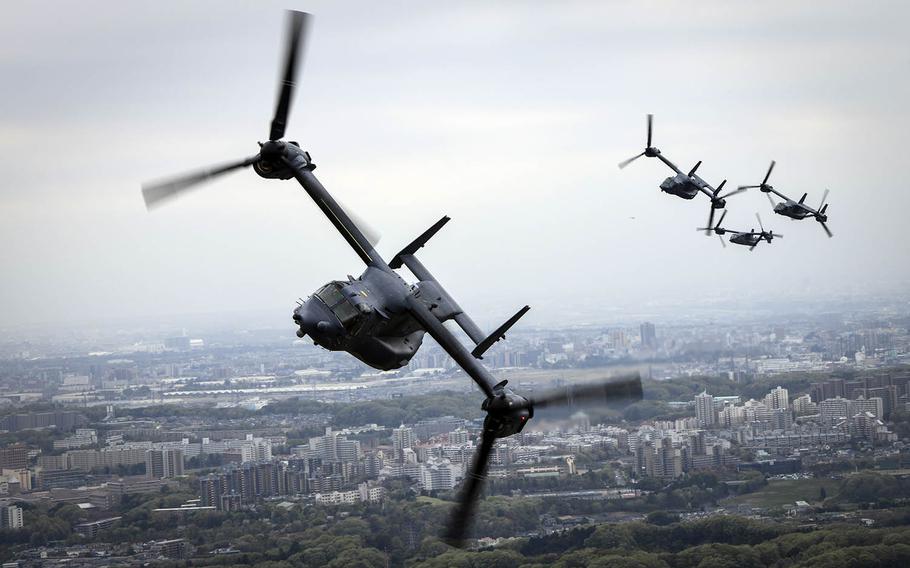 YOKOTA AIR BASE, Japan — People living near the home of U.S. Forces Japan in western Tokyo have complained about vibrations and lights when Air Force CV-22 Ospreys fly overhead, according to local press.

Residents as far as 6 miles from Yokota in the cities of Hachioji and Akiruno have felt vibrations when the tiltrotor aircraft fly nearby, the Tokyo Shimbun reported Monday. Others have observed lights shining down from the Ospreys, which arrived at Yokota last fall.

House walls, doors and windows shake when the aircraft are overhead, residents told the newspaper.

“You can hear low and heavy noise at night … then windows tremble. I’m afraid that they might crash” and “You feel tremble from below and I feel sick,” said a resident who was not identified in the report.

They are allowed to fly in helicopter mode outside Yokota’s perimeter only “when necessary,” according to an agreement between the U.S. and Japanese governments, Yokota spokesman Air Force Master Sgt. Michael Davis said in an email Friday.

A 65-year-old man living in Akishima filmed Ospreys flying in helicopter mode over people’s homes in early January and said it happens regularly, according to Tokyo Shimbun.

A 69-year-old woman from Hachioji complained about a “search light” shining into a local neighborhood, the newspaper also reported.

People might be confused by the aircraft’s landing light, which is turned on during approaches and is similar to one used by UH-1 Huey helicopters at Yokota, Davis said.

“The Osprey aircraft are not actively targeting individual’s homes, but they may shine on someone’s house briefly when they are coming in for a landing approach,” he said.

“This open dialogue allows us to be good neighbors with our community and gives us a chance to find out what’s on the residents’ minds,” he said. “We take feedback from our meetings and communicate with base officials to work to find balance to meeting mission/training objectives and the needs of the community.”