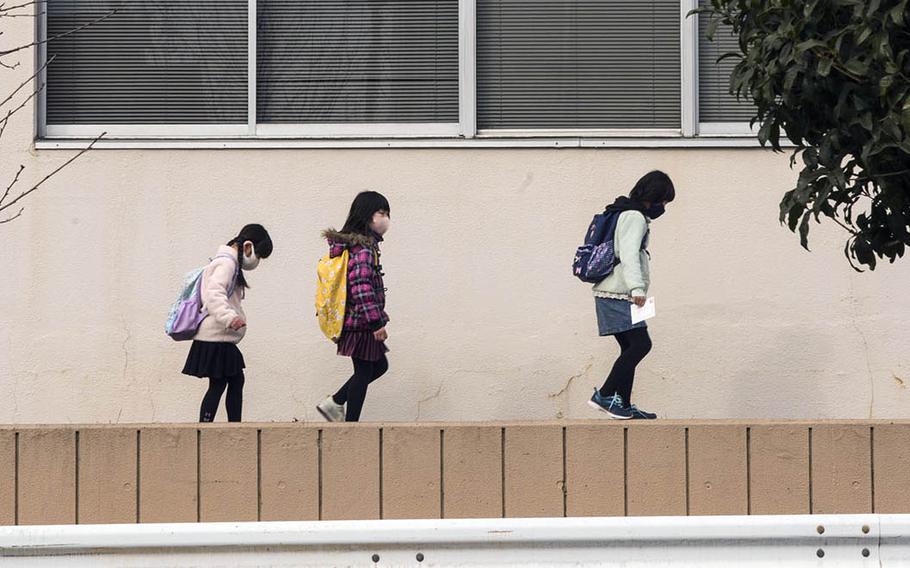 Buy Photo
Children masked against the coronavirus make their way along a street in Fussa, Japan, on Jan. 5, 2020. (Theron Godbold/Stars and Stripes)

TOKYO – A record-breaking coronavirus surge continued Thursday in Tokyo, which reported more than 2,000 new cases in one day for the first time.

The Tokyo Metropolitan Government reported 2,447 newly infected individuals, according to public broadcaster NHK. Nearly 69,000 people in the city have contracted the virus during the pandemic, and more than 650 have died, according to metro government data.

Japanese Prime Minister Yoshihide Suga on Thursday evening declared a state of emergency in Tokyo and the three surrounding prefectures that comprise the greater metro area: Kanagawa, Saitama and Chiba. The declaration would allow governors in those areas to ask businesses to limit their hours and encourage their employees to telework, among other measures.

Marine Corps Air Station Iwakuni, 500 miles west of Tokyo, reported another 11 individuals had contracted the virus, according to a Facebook post Thursday. Ten were close contacts of a previously infected person and were already in quarantine; the remaining individual was not in quarantine.

The air station has reported 28 new cases of coronavirus thus far in January.

The Marines also reported Wednesday that two second-grade classrooms at Bechtel Elementary School, a Defense Department school at Camp McTureous, were closed Thursday after someone associated with the school had tested positive for the coronavirus.

A Defense Department civilian employee at Yongsan Garrison in Seoul tested positive Tuesday after developing symptoms of COVID-19, the respiratory disease caused by the coronavirus, according to a new release Wednesday. The individual last visited Yongsan on Dec. 30 and self-quarantined at his home in Seongnam.

Three more civilians, a family at Yongsan that had contact with that individual, also tested positive on Wednesday, according to a USFK news release. They are two DOD employees and their dependent; they last visited the installation on Tuesday.

All four are now quarantined at Camp Humphreys, according to USFK.

All of the remaining 25 are new arrivals to the peninsula and tested positive while still in isolation, according to a USFK news release Thursday.

Fifteen service members and four dependents arrived at Osan Air Base on the Patriot Express, a government-chartered passenger air service from the U.S., on Sunday, Monday and Tuesday.