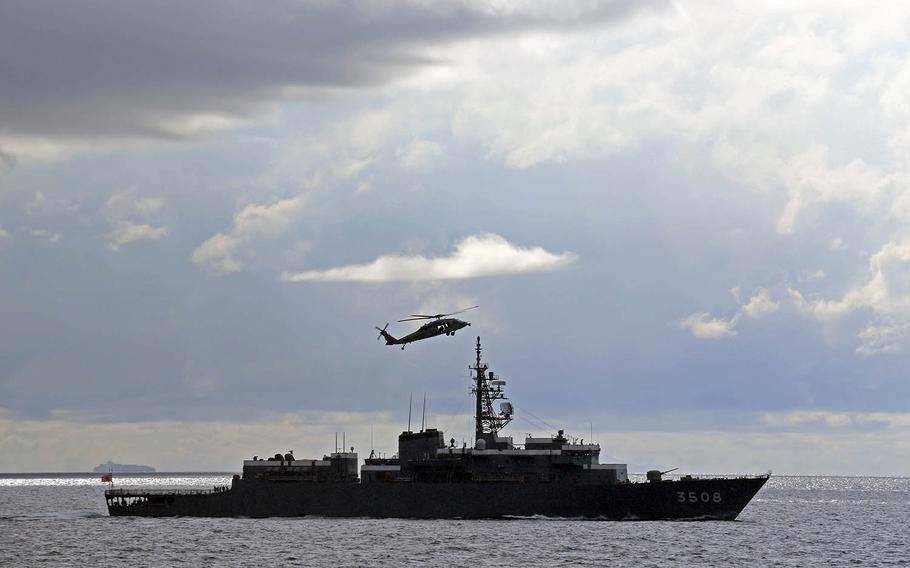 Japan recently joined six other nations by messaging the United Nations that it rejects China’s territorial claims in the South China Sea.

The “note verbale” sent Jan. 19 to the U.N. dismisses a September claim by Beijing that its maritime territory there extends to a cluster of islands and reefs more than 1,200 miles from the Chinese mainland. A note verbale is less formal than a diplomatic note and is sent unsigned.

The United States, United Kingdom, Germany, France, the Philippines, Malaysia and Vietnam have voiced similar objections in the U.N. since September over China’s claims to outlying archipelagos, including the Spratly and Paracel island chains.

Japan makes no claims of its own in the South China Sea, but it objects to China’s assertion of sovereignty in the sea and airspace around “those maritime features found to be low-tide elevations,” according to the note.

Setting a baseline around the island chains would allow Beijing to claim nearly all of the South China Sea. The sea is a critical shipping lane vital to more than half of all global maritime trade, according to the U.N.

Japan in its message said China tried to restrict overflights by Japanese aircraft of Mischief Reef in the Spratlys, where China has built an airfield and made other improvements. It did not specify whether the aircraft was commercial or military.

“As a matter of fact, China protested the overflight of Japanese aircraft in the airspace surrounding Mischief Reef and attempted to restrict the freedom of overflight in the South China Sea,” Japan said in the note.

Japan’s Ministry of Foreign Affairs on Wednesday declined to provide details about the flight, citing “operational safety,” or of the Chinese protest “since it is a diplomatic matter.”

The U.S. regularly conducts freedom-of-navigation operations sailing near or flying over contested islands in the South China Sea, including Mischief Reef.

While it has no competing claims in the region, Japan does control a small, uninhabited group, the Senkakus, in the nearby East China Sea, a claim China actively contests. President Joe Biden in a phone call Wednesday assured Japanese Prime Minister Yoshihide Suga that the U.S. commitment to defend Japan extends to the Senkakus.

Japanese maritime security expert Tetsuo Kotani on Tuesday said Japan, whose constitution generally forbids offensive military action, relies on the international order set out in the United Nations Convention on the Law of the Sea.

“The rule of law and rules-based order in the maritime domain is critical for maritime nations like Japan,” the Japan Institute of International Affairs senior research fellow told Stars and Stripes by email.

Kotani added that Japan was likely inspired to issue the note as “part of a collective action by the U.S. and some European and Southeast Asia countries.”

Notes from the U.K., Germany and France to the U.N. in September decried China’s claims to the South China Sea and emphasized “the importance of unhampered exercise of freedom of the high seas, in particular the freedom of navigation and overflight” in that region.

China in September told the U.N. its claims are consistent with the Law of the Sea treaty, which spells out international rights and responsibilities regarding the oceans.

China’s assertion mirrored its failed argument in a 2016 arbitration involving the Philippines at The Hague that the “nine-dash line” drawn by China in 1947 is based on its historic rights to the region. The line encompasses about 90% of the South China Sea.

“China’s territorial sovereignty and maritime rights and interests in the South China Sea are established in the long course of history and have been consistently upheld by successive Chinese Governments,” Beijing wrote to the U.N. in September.

Japan, however, said China had “failed to invoke the relevant provisions” of the treaty to back up its territorial claims.

“The is no room for a state party to justify the application of baselines that do not satisfy the conditions stipulated under” the Law of the Sea treaty, it wrote.