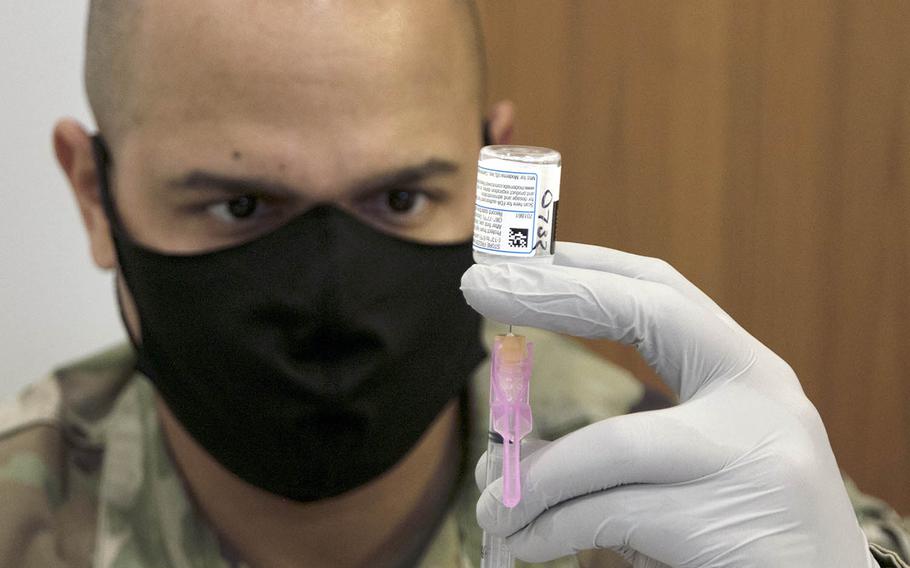 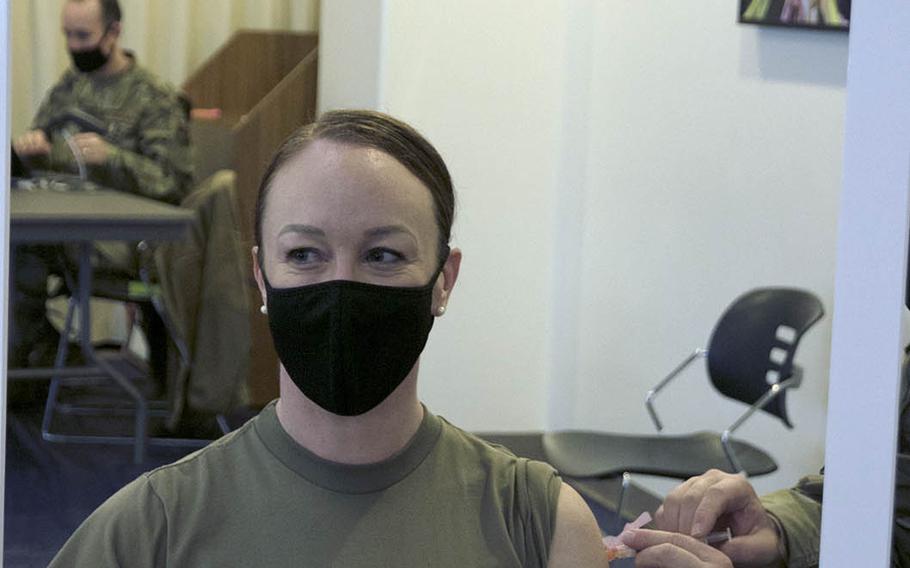 Buy Photo
An airman at Kadena Air Base on Okinawa poses for a photo while receiving her second dose of the Moderna coronavirus vaccine at the 18th Medical Group Clinic, Friday, Jan. 29, 2021. (Matthew M. Burke/Stars and Stripes)

TOKYO – Japan’s capital city ended the workweek with a drop in new coronavirus infections and the U.S. military in Japan reported 34 by 6 p.m. Friday.

Tokyo, the three prefectures surrounding it and seven other prefectures throughout the country are in a state of emergency declared by the government until Feb. 7.

South of the city, Yokosuka Naval Base said 23 people have tested positive since Tuesday with 47 recoveries, according to a Facebook post Friday. Four tested positive after developing symptoms of the respiratory disease COVID-19; nine were discovered by contact tracing; six are recent arrivals to Japan; three tested positive during a medical screening and one is a base employee who also developed COVID-19 symptoms.

The base has 124 patients under observation and has reported 290 new infections this month, its highest monthly total during the pandemic thus far.

Also, students on one specific school bus at Yokosuka were told to stay home Friday while public health authorities traced the contacts of someone at The Sullivans Elementary School who tested positive for the virus, according to a message to students and families Thursday evening.

The new patient contracted the virus “somewhere other than school,” according to the message signed by three principals at Defense Department schools at Yokosuka. Students on that bus were told to return to class Monday.

Atsugi Naval Air Facility, 26 miles southwest of Tokyo, reported one new coronavirus patient Friday, an individual already quarantined as a close contact of another infected individual, base spokesman Sam Samuelson told Stars and Stripes by phone. The base is monitoring 13 patients, he said.

Six individuals tested positive for the coronavirus at Yokota Air Base, the headquarters of U.S. Forces Japan in western Tokyo, according to a Facebook post. Four were already in quarantine after arriving in Japan. A fifth patient was also in quarantine as a close contact. The sixth person was “identified and quarantined” by public health authorities but the base provided no further information.

The base on Friday also posted word that it would accelerate its inoculation of phase one personnel with the Moderna vaccine against COVID-19, “consistent with higher headquarters direction.” Phase one consists of two categories and three subcategories, from frontline health care providers and first responders to other “critical and essential support personnel” not specifically identified.

To the south, Kadena Air Base on Okinawa reported three people tested positive, according to a Facebook post Thursday evening. Two people in a family became ill with COVID-19 symptoms and immediately self-isolated. The third person tested positive in the test required before exiting quarantine, according to the base.

Public health authorities identified and quarantined an unspecified number of close contacts, the base said.

The medical clinic at Kadena this week began administering the second round of the Moderna vaccine, which requires two shots to be most effective.