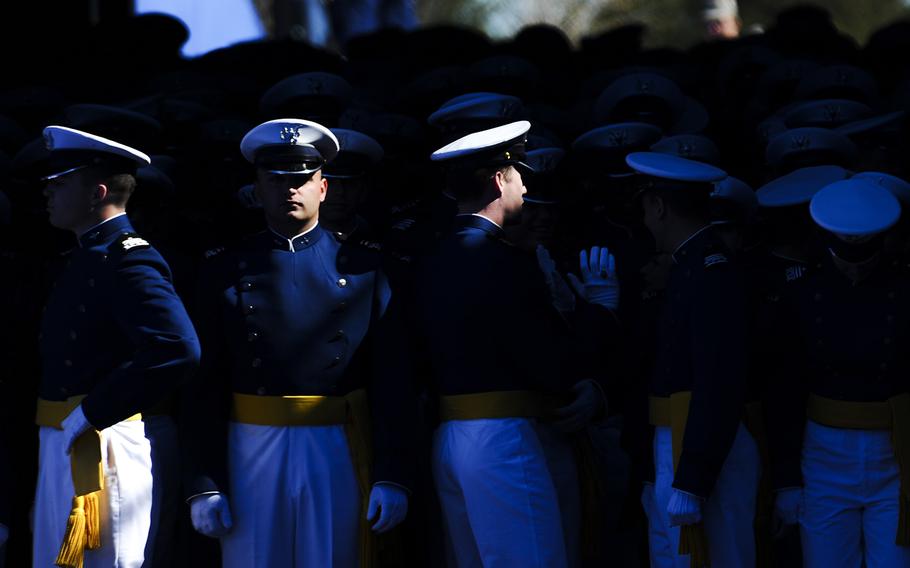 Air Force Academy cadets wait at the Falcon Station tunnel prior to their graduation ceremony in May 2017. (Julius Delos Reyes/U.S. Air Force)

Air Force Academy cadets wait at the Falcon Station tunnel prior to their graduation ceremony in May 2017. (Julius Delos Reyes/U.S. Air Force) YOKOTA AIR BASE, Japan — The leader of the largest Air Force transport hub in the Far East is slated to return to the Air Force Academy this summer.

Cantwell, whom the Senate confirmed earlier this year to pin on his first star, is expected to leave the academy July 3 to command NATO Alliance Ground Surveillance Force at Naval Air Station Sigonella, Italy, the statement said.

Jones, in his new role, will support the academy’s superintendent, a three-star general, in directing “military training, academics, and character development programs leading to a bachelor’s degree and commissioning as a second lieutenant” in the Air Force or Space Force, the statement added.

Jones is no stranger to the academy. He graduated in 1995 as the second-highest basketball scorer in school history, with 2,003 career points, and was a finalist for that year’s Naismith College Player of the Year award.

Jones will be joining the Air Force Academy about three months after two senior cadets were found dead in their dorm rooms of suspected suicides. The deaths, which happened within 48 hours of each other, prompted visits by top Air Force leaders and forced the academy to rethink stringent measures taken to prevent an outbreak of the coronavirus among its roughly 1,000 seniors.

Among the changes that academy officials acknowledged was the decision to allow cadets to have a roommate, if they wanted. The seniors, who graduated in April, had been largely isolated to single-person rooms while taking online classes after the academy’s roughly 3,000 underclassmen were sent home because of the pandemic.