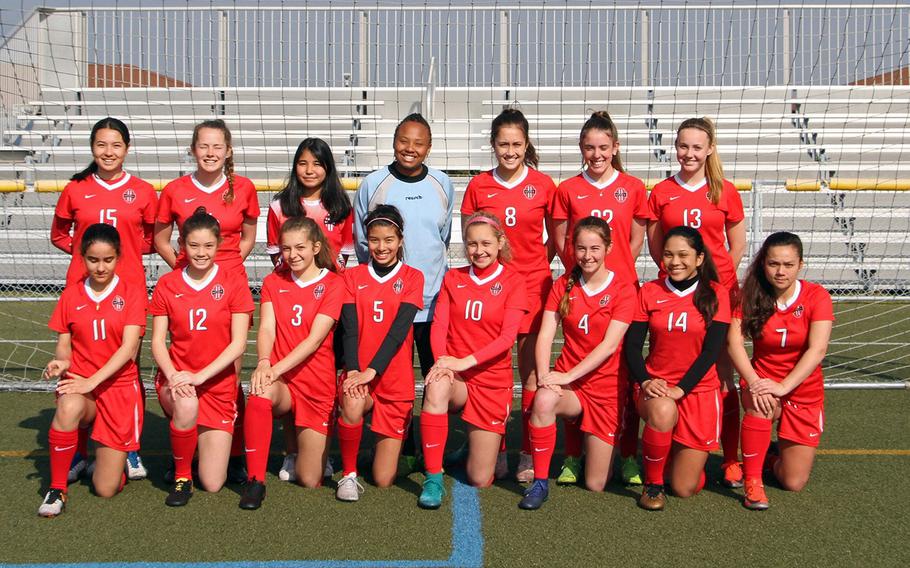 Not only do Matthew C. Perry’s boys and girls soccer teams and Nile C. Kinnick’s girls team succeed on the field, they’ve proven they can crack the books as well, at least based on awards they received earlier this month.

The Samurai boys and girls and the Red Devils girls were each accorded the United Soccer Coaches of America Team Academic Award for school year 2018-19. The award is given each year to celebrate academic achievement by soccer teams which demonstrate a commitment to excellence in the classroom.

To qualify for the award, all players on their respective teams must carry a minimum 3.25 grade-point average for the entire school year. Perry’s girls carried a 3.71, Kinnick’s girls 3.70 and Perry’s boys 3.57, according to DODEA Pacific.

Out of 288 teams, 113 boys and 175 girls, which earned the award in the United States, just three were from DODEA, and Perry was one of just 30 schools that had both its boys and girls teams win the award.

It’s the fifth straight year the Kinnick girls have won the honor and fourth straight for Perry’s boys. “I am constantly amazed at the commitment the players have,” said Kinnick coach Nico Hindie of the attention given to class work even as his players prepare for matches. “Many of them will read and do homework on a bus to and from a match, before and after. We often come home very late from these (matches) and yet they still manage to get it (class work) done.”

Such honors are significant given the number of high school teams across the United States, said DODEA Pacific’s athletics coordinator Tom McKinney.

“DoDEA Pacific’s student-athletes continue to be a source of pride for all of DoDEA,” McKinney said. “The outstanding achievements of our student-athletes in the classroom and in competition reflect the effort and enthusiasm with which they go about their business.”