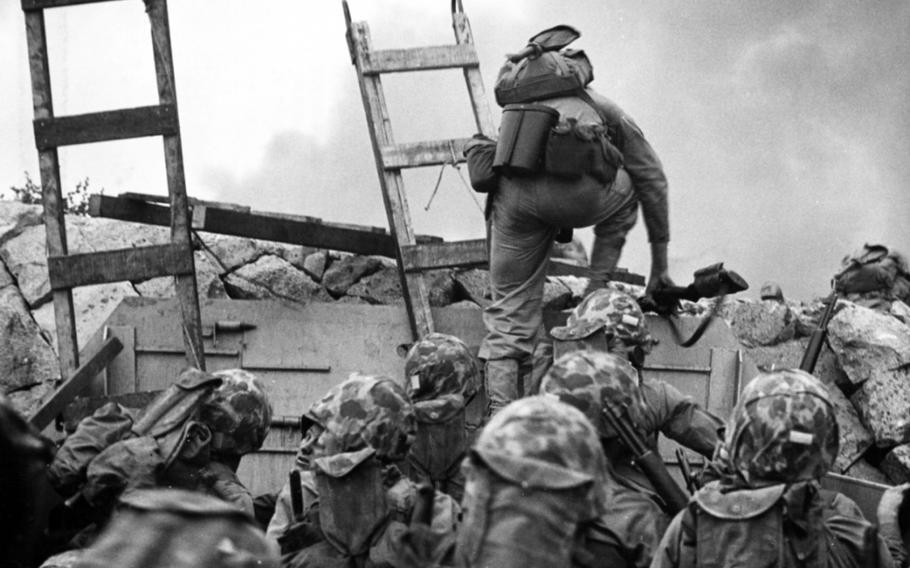 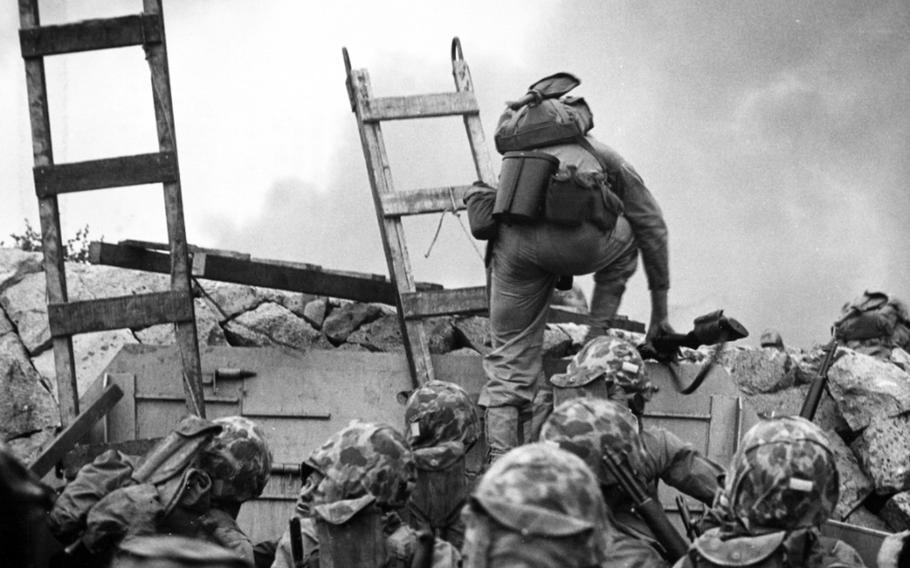 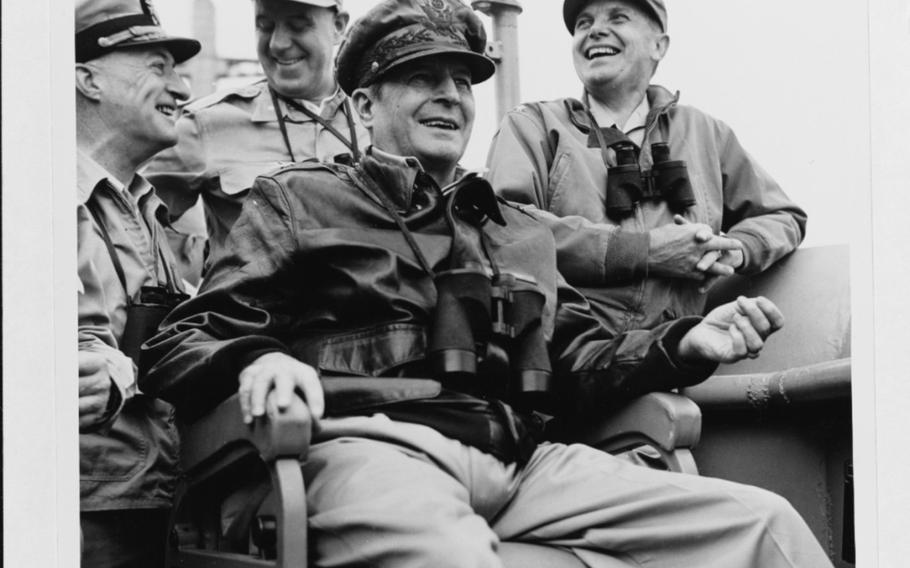 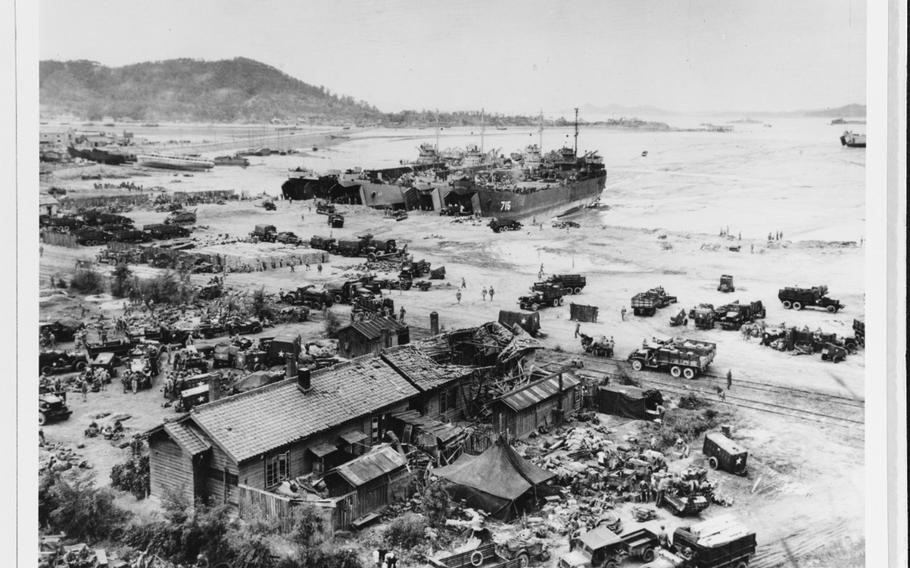 Men and equipment are unloaded at low tide on Incheon's Red Beach, Sept. 16, 1950, the day after the initial landings there. (U.S. Navy/National Archives) 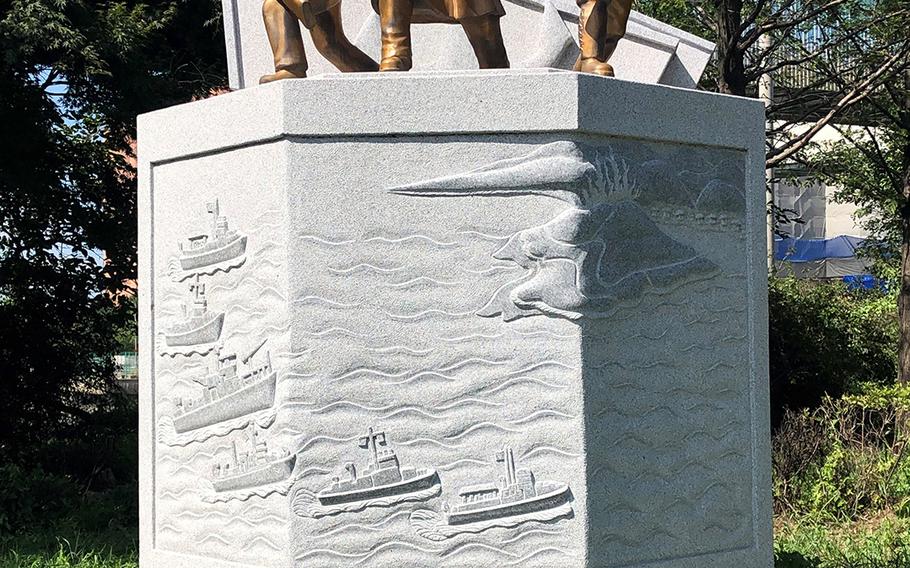 A memorial was erected near the landing site known as Red Beach honoring the September 1950 Incheon landing in South Korea. (Robert H. Reid/Stars and Stripes) 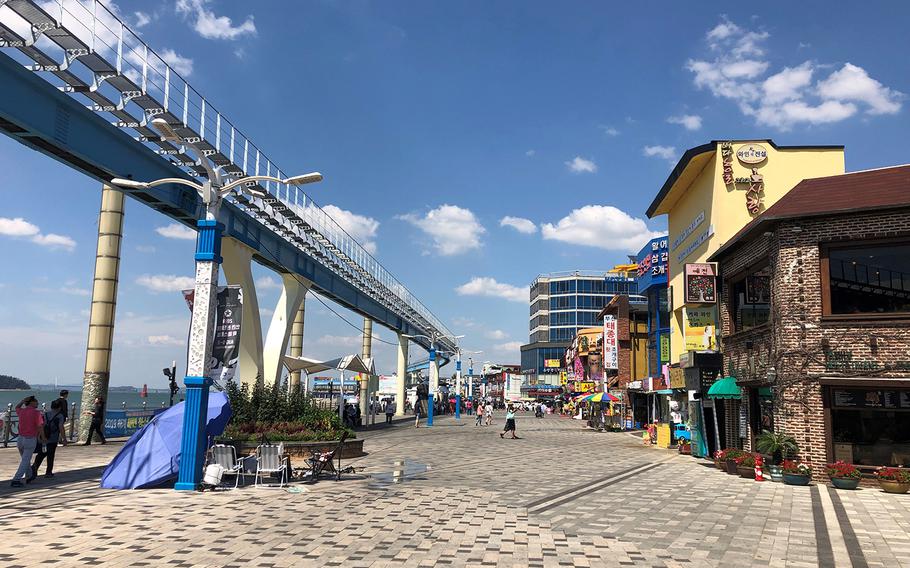 The area where the 5th Marines first came ashore on South Korea's Wolmi Island during the September 1950 Incheon landing operation has become a busy boardwalk lined with seafood restaurants and a popular amusement park. (Robert H. Reid/Stars and Stripes) 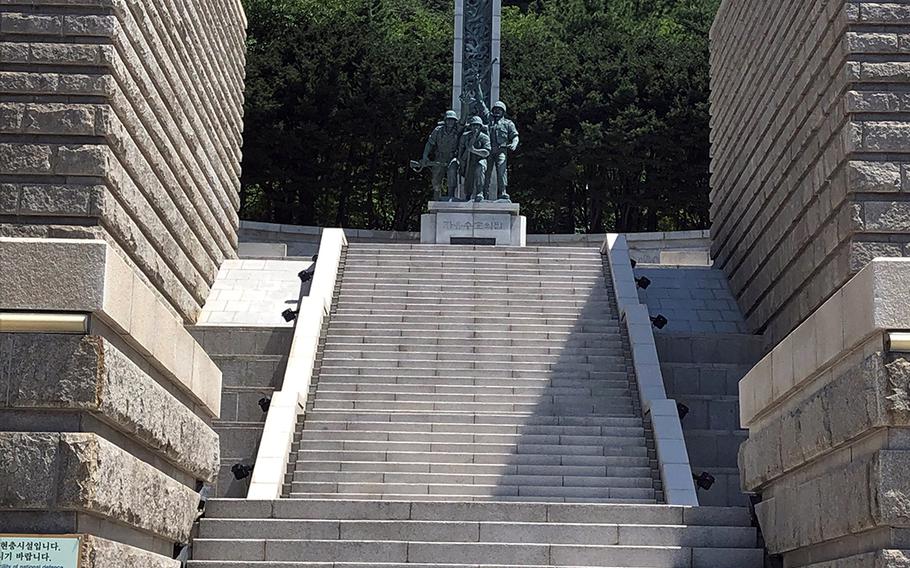 A memorial honoring the September 1950 Incheon landing is among the displays at a museum devoted to the pivotal operation in the South Korean port city. (Robert H. Reid/Stars and Stripes) 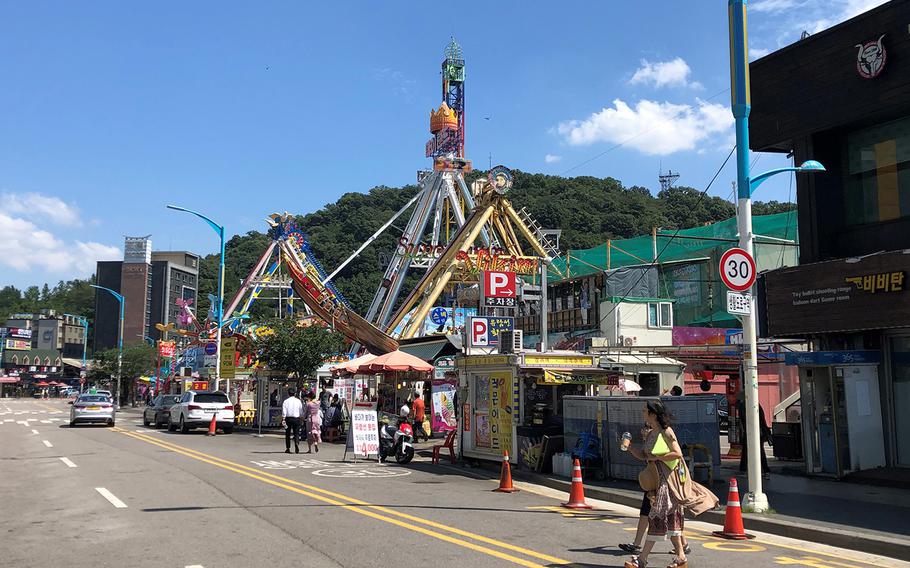 A popular amusement park now sits at the foot of the hill on South Korea's Wolmi Island that was the U.S. Marines' initial objective in the September 1950 Incheon landing. (Robert H. Reid/Stars and Stripes) 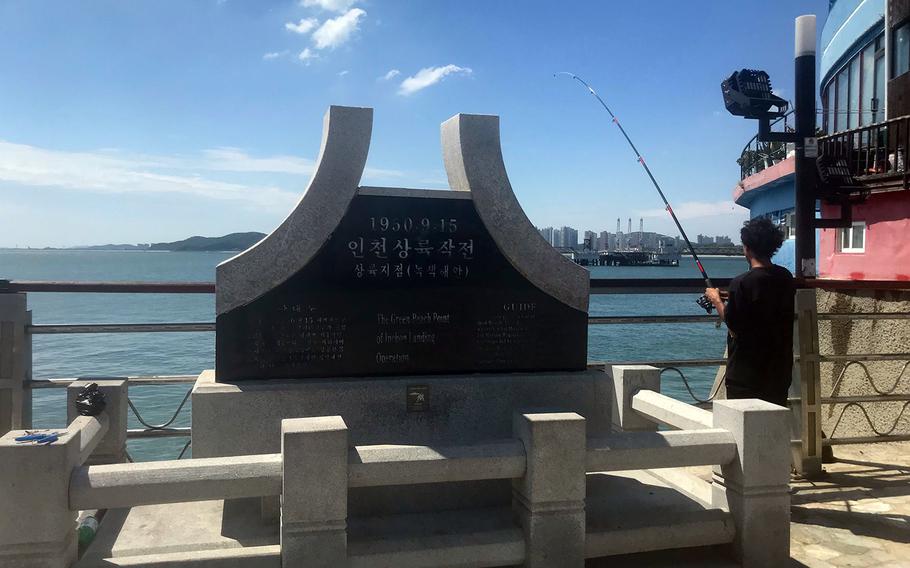 A South Korean fisherman casts his line near a Green Beach memorial marking the site where the 5th Marines first came ashore on Sept. 15, 1950. (Kim Gamel/Stars and Stripes) 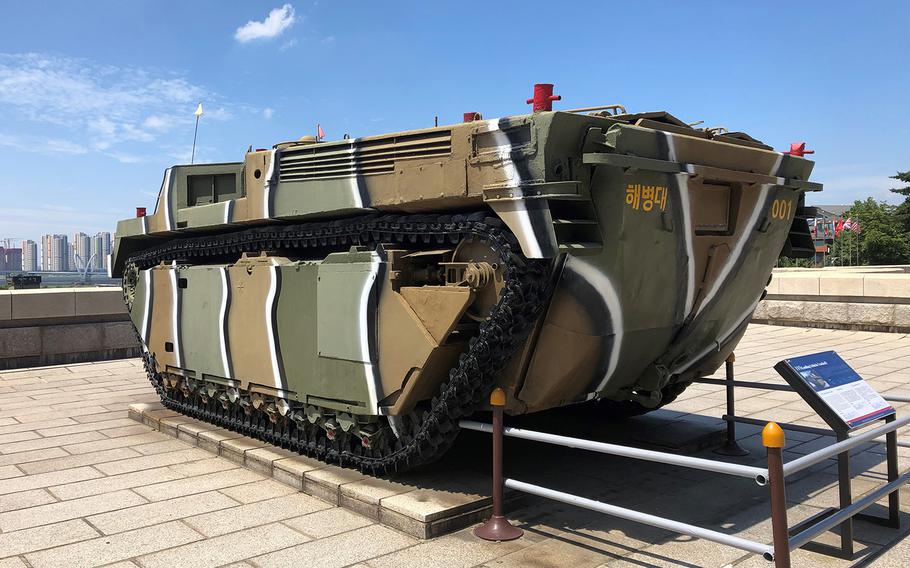 A landing craft used by the Marines during the September 1950 Incheon landing is among the displays at a museum devoted to the pivotal operation in the South Korean port city. (Robert H. Reid/Stars and Stripes) 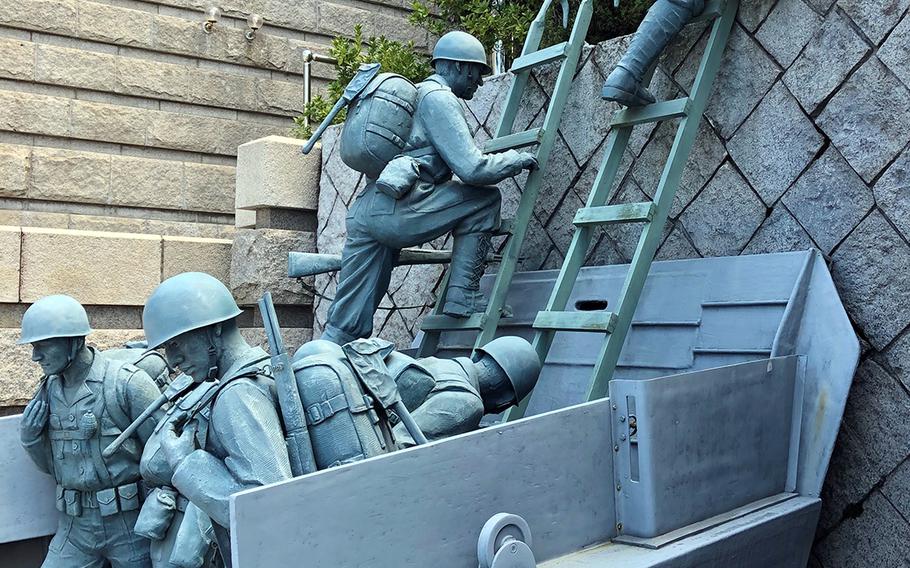 A sculpture depicting the Marines scaling a seawall at the landing point known as Red Beach during the September 1950 Incheon landing is among the displays at a museum devoted to the pivotal operation in South Korean port city. (Robert H. Reid/Stars and Stripes) 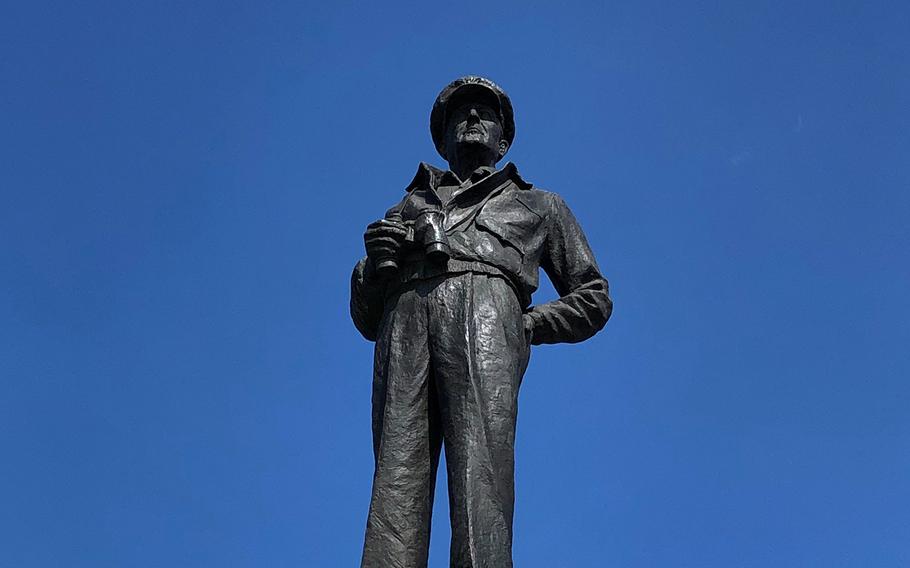 A larger-than-life statue of Gen. Douglas MacArthur, who led the September 1950 Incheon landing, towers above a seaside park in the South Korean port city. (Robert H. Reid/Stars and Stripes)

INCHEON, South Korea — U.S.-led forces were in danger of losing the Korean War as the North Koreans pushed them back to a defensive line on the southern tip of the peninsula known as the Pusan Perimeter.

Gen. Douglas MacArthur, in command of the troops fighting under United Nations auspices, knew what needed to be done. But first, the five-star general had to convince the rest of the top brass.

The Incheon landing, which began 69 years ago Sunday, went against the better judgment of Navy, Marine and other Army commanders who argued the narrow port channel, swift currents and extreme tides were too dangerous and could leave ships stranded and vulnerable to attack.

The 70-year-old war hero prevailed, insisting that the riskiness of the plan to land Marines behind enemy lines only boosted the element of surprise.

The high-stakes gamble marked a turning point early in a war which, absent a formal peace treaty, is technically still underway. The landing severed North Korean supply lines, allowed the allied forces to recapture Seoul and push the North Koreans back toward the 38th parallel that at the time divided the Communist North from the Western-backed South.

Element of surprise Not taking any chances, U.S., British and South Korean forces staged diversionary bombardments in other areas in the days before aiming at the port of Incheon, about 25 miles west of Seoul.

Naval destroyers and war planes then converged near Wolmi-do, a heavily fortified North Korean-held island with a hill that overlooked the Incheon harbor and was the first target of the landing.

Marine aircraft squadrons “began the softening-up of Wolmi-do” on Sept. 10 by dropping napalm tanks that “burned out most of the buildings on the island,” retired Marine Brig. Gen. Edwin Simmons wrote in “Over the Seawall, U.S. Marines at Inchon.”

Finally, the 3rd Battalion, 5th Marines rode the tide in at dawn at a landing point known as Green Beach.

They met little resistance and quickly secured the area, attaching an American flag to the top of a tree and guarding dozens of dazed North Korean prisoners while waiting for the evening tide to allow the mission to continue.

About 12 hours later, the main assault group crossed a point called Red Beach across a narrow causeway that linked the island with Incheon proper while other Marines landed over Blue Beach in the inner harbor to the south.

The use of the term beaches to describe the landing points was a misnomer since they were surrounded by a granite seawall.

“I was in the fifth wave that hit ‘Red Beach,’ which in reality was a rough, vertical pile of stones over which the first assault troops had to scramble with the aid of improvised landing ladders topped with steel hooks,” wrote Marguerite Higgins, a reporter who won the Pulitzer Prize for her front-line accounts of the war.

“Despite a deadly and steady pounding from naval guns and airplanes, enough North Koreans remained alive close to the beach to harass us with small-arms and mortar fire,” she added.

In one iconic photo, 1st Lt. Baldomero Lopez is shown climbing over the seawall under enemy fire. The 25-year-old Marine, who died after he fell on a live grenade, was posthumously awarded a Medal of Honor.

Strategic success In all, the amphibious landing, known as Operation Chromite, involved some 75,000 troops and 261 naval vessels. Meanwhile, the Eighth Army broke out of the Pusan Perimeter and pressed north by land, squeezing the North Koreans in a “hammer and anvil” maneuver.

Allied forces took Seoul and the strategically important Kimpo airport within about two weeks in what is widely considered one of the most successful wartime operations of the 20th century.

The U.N. death toll for the entire operation was 566 while tens of thousands of North Koreans were killed or captured.

“As American forces were on the brink of being driven from South Korea by the invasion of the North Korean army, General MacArthur ordered an amphibious landing deep behind enemy lines,” ex-Defense Secretary Jim Mattis wrote in his new memoir.

“MacArthur’s brilliance in Korea lay in moving the Marines hundreds of miles by sea to land in the rear of the unsuspecting North Korean army, and resulted in far fewer friendly casualties,” Mattis said.

The victory also was a turning point in restoring the Marine Corps, which had been devastated by post-World War II cuts.

But, historians say, the success emboldened MacArthur and lowered resistance to his plan to push farther north than originally planned, ignoring warnings that the Chinese were prepared to join the war to keep the Americans from reaching their doorstep, historians say.

The Chinese intervention in mid-October reinvigorated the communist forces as the two sides fought in a bloody stalemate until an armistice was reached in 1953.

Overshadowed by progress While Incheon is often mentioned in the same breath as Normandy on lists of the most successful amphibious landings, there are few reminders of the operation on the island where it began.

For one thing, Wolmi-do is no longer an island, having been linked to Incheon proper, as the city is now spelled in English, by reclaimed land.

In 2008, a South Korean truth and reconciliation commission found that villagers on the island had not been warned of the impending attack and at least 10 civilians were killed.

Memorials marking the sites of the three targeted beachheads have been overshadowed by South Korea’s subsequent rush toward capitalism, including a popular amusement park with a Viking ship ride at the foot of the hill that was the original Marine objective.

That’s a sharp contrast to the solemn and well-preserved D-Day memorials in France, although there is a museum and a larger-than-life statue of MacArthur elsewhere in the city.

“Some of that land has been reclaimed and everything has shifted. Suddenly some of the markers are several blocks from the water,” said Cord Scott, a history professor who has retraced the invasion route.

“In a roundabout way they’re showing how much South Korea has progressed and developed,” he said. “The Blue Beach marker is literally next to a gas station on the side of the road. I drove past it twice.”