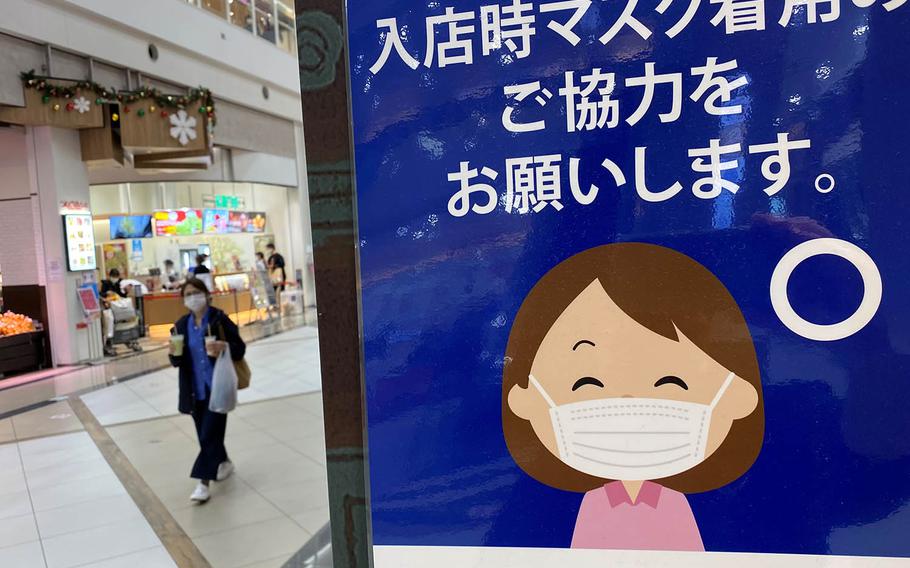 Buy Photo
A sign reminds shoppers to wear a mask inside a mall in western Tokyo, Sunday, Nov. 8, 2020. (Aaron Kidd/Stars and Stripes)

TOKYO — The U.S. military reported 21 new cases of the coronavirus Tuesday in South Korea and nine in Japan as of 6 p.m. Tuesday, the bulk of them new arrivals in those countries.

U.S. Forces Korea said the individuals who tested positive arrived between Oct. 23 and Saturday aboard both the government-chartered Patriot Express and commercial flights, according to a news release Tuesday.

Nineteen of them were positive on their first test before entering quarantine; two tested positive on a second test while in quarantine, the release said.

According to USFK, 16 service members arrived at Osan Air Base on the government flight on Nov. 3 and 4, and Thursday and Saturday; four dependents and a civilian contractor arrived at Incheon International Airport on commercial flights on Oct. 23, 28 and Friday. All 21 are quarantined at either Osan Air Base or the Army’s Camp Humphreys.

In Japan, the Navy announced six new cases at Yokosuka Naval Base, the home of the 7th Fleet south of Tokyo. The Marines reported three at Marine Corps Air Station Iwakuni for a two-day total of five there since Monday.

U.S. commands in Japan, unlike those in South Korea, do not always specify whether new patients are service members, civilian employees or family members.

The six patients at Yokosuka, all recent arrivals to Japan, tested positive for the virus since Friday while still in quarantine, according to a Facebook post on Tuesday. They remain in isolation, according to the base, which also reported a total 14 active cases there now.

All new arrivals to Japan and South Korea with the U.S. military and travelers returning from abroad must be tested immediately, spend 14 days in quarantine and test free of the virus before leaving isolation.

The pair were identified through contact tracing while Marines from one unit, their families and individuals who had contact with them were on lockdown overnight, according to the base and a Facebook message Tuesday from base commander Col. Lance Lewis.

Widespread testing was underway at the air station on Tuesday, according to the release.

Japan on Tuesday reported 899 new coronavirus cases for a pandemic total of 108,983 and 1,829 deaths, according to the World Health Organization.

Tokyo reported 293 new cases Tuesday and Sapporo, the capital of Hokkaido prefecture in the country’s north, reported 126 new cases as the number of cases there continues to grow, according to public broadcaster NHK.