Theft at base in Japan highlights limits of military law 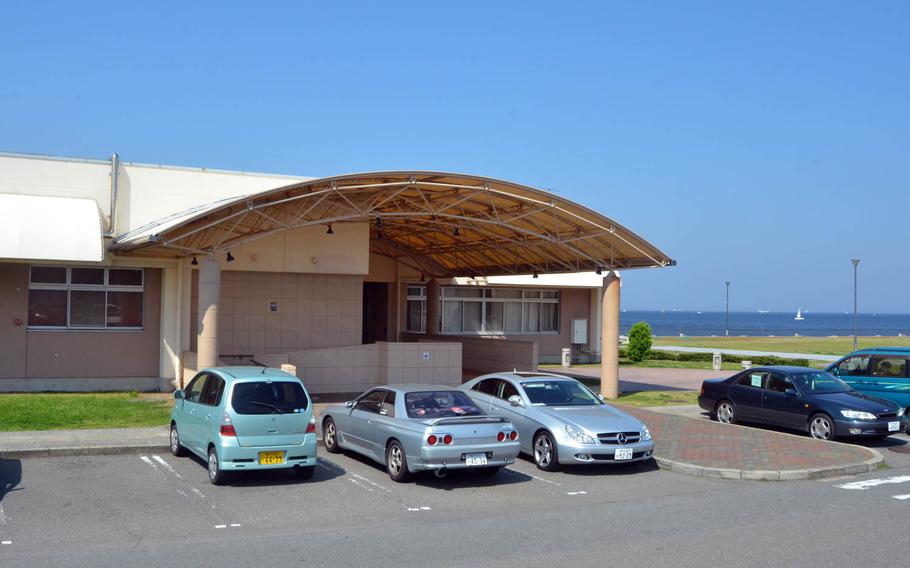 The Seaside building at Yokosuka Naval Base, where on March 6, 2015, a large sum of cash went missing from the slot machine gaming room. While an investigation is ongoing, it remains to be seen whether federal prosecutors would take the case if a suspect were arrested. (Erik Slavin/Stars and Stripes)

The Seaside building at Yokosuka Naval Base, where on March 6, 2015, a large sum of cash went missing from the slot machine gaming room. While an investigation is ongoing, it remains to be seen whether federal prosecutors would take the case if a suspect were arrested. (Erik Slavin/Stars and Stripes) 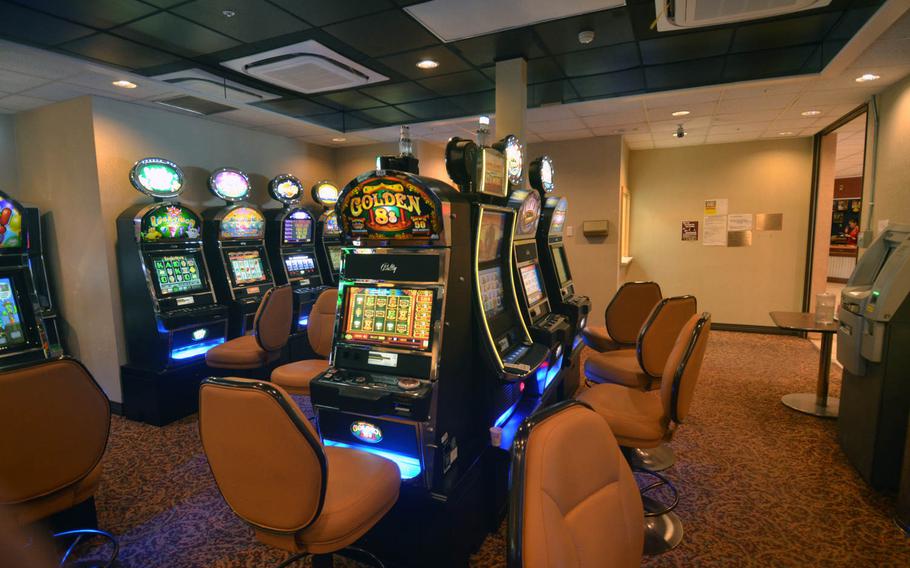 On March 6, 2015, a large sum of cash went missing from the cashier cage inside the gaming room at the Seaside building at Yokosuka Naval Base. No arrests have been made and the investigation remains open. (Erik Slavin/Stars and Stripes) 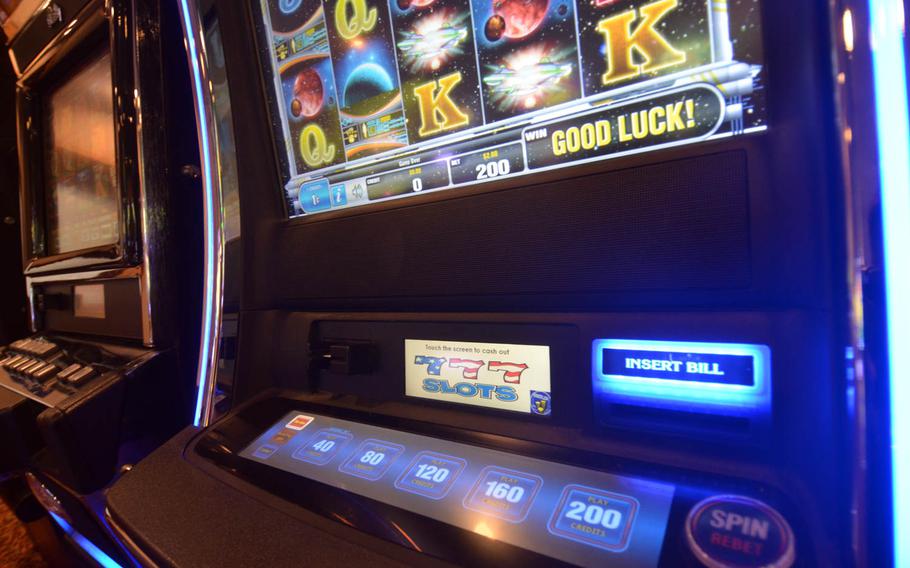 A slot machine stands at the Seaside building at Yokosuka Naval Base, where on March 6, 2015, a large sum of cash went missing from the cashier cage. No arrests have been made and the investigation remains open. (Erik Slavin/Stars and Stripes)

YOKOSUKA NAVAL BASE, Japan — On March 6, a large sum of cash was stolen from a slot machine room at the Navy’s largest base in Asia.

This wasn’t the first time money had gone missing from a Navy entertainment facility in Japan. In 2010, $67,000 went missing from a Naval Air Facility Atsugi club. Only a few civilians had access to the cash, but no one was ever arrested.

Navy officials in Japan say that while they can make it hard to steal and even harder to go unidentified, a determined thief is going to have opportunities at entertainment facilities, which are primarily operated by civilians who, unlike servicemembers, do not fall under the Uniform Code of Military Justice.

When crime prevention among civilians fails, the question then becomes whether federal officials will prosecute them. Unless the crime is violent or particularly noteworthy, the answer is probably not.

When criminal suspects fall under the UCMJ, custody and prosecution become straightforward legal matters. If the suspect is a civilian, custody may become subject to international accords and possibly extradition agreements, which can take months or years to find their way through the courts.

Sources familiar with the March theft at Yokosuka told Stars and Stripes that a suspect is a third-country national admitted to Japan. If the suspect is still in Japan and off-base, the U.S. has no jurisdiction to make the arrest and would need assistance from Japanese authorities.

Naval Criminal Investigative Service officials declined to talk about the case, including the suspect and the total amount stolen, other than to confirm that it remains open.

If the U.S. gained custody of a suspect, it would have the right to prosecute at the federal level under the little-used Military Extraterritorial Jurisdiction Act.

However, crimes like relatively low-stakes theft or driving under the influence on federal property are unlikely to garner the attention and expense necessary for a prosecution, said Victor Hansen, an associate dean at New England Law Boston and a retired Army attorney.

“Even in the United States, the U.S. Attorney’s Office is traditionally not interested in prosecuting low-level crimes if they can avoid it,” Hansen said.

Many civilians, few charges At many overseas bases, including several in Afghanistan and Iraq, civilians have outnumbered military servicemembers since MEJA was enacted in 2000, according to congressional reports.

Of those millions of civilians, contractors and family members, few have ever been charged with a crime. A Justice Department attorney counted about 50 cases that involved prosecution under MEJA and other statutes in 2012, according to a paper published in the military’s Army Lawyer professional journal.

A database query requested from a Department of Justice spokesman by Stars and Stripes recently found just 22 MEJA defendants in 18 cases as of March 31. Justice officials say the slightly higher 2012 figure may be more representative, since it includes MEJA-related cases prosecuted under a different statute.

The prosecuted cases often involve violence and sex crimes, including the 2014 case of an 18-year-old student who recorded his sexual assault of an incapacitated minor in Okinawa. In April, four former Blackwater security employees were prosecuted under MEJA and sentenced to lengthy prison terms for killing 14 unarmed Iraqis in 2007.

However, in some cases in which federal prosecutors might be interested, military commanders may not be inclined to see out a complex process.

Overseas base commanders more typically exercise their wide discretion over access and bar suspected offenders from entering the installation. For civilians in a country under a Status of Forces Agreement, this often means losing both employment and a visa, while locally hired civilians lose their jobs.

“It doesn’t bring justice, but … commanders make the assessment that this kind of misconduct doesn’t have the same impact on good order and discipline as misconduct by military forces would have,” Hansen said.

MEJA applies only to DOD civilians accompanying the military; it doesn’t cover civilians who head overseas with other government agencies. Congressional lawmakers have tried to close that loophole with the proposed Civilian Extraterritorial Jurisdiction Act, but that bill died in a subcommittee last year.

Cash security Deterring crime in the first place avoids the difficulties of prosecution entirely, and Navy officials say they go to great lengths to do that.

Current security procedures at the Navy’s Morale, Welfare and Recreation facilities in Japan should make it reasonably clear who held accountability for the stolen cash in March.

“Every employee who has money is supposed to be assigned a safe, and only that employee has access to that safe,” said Tom Moriarty, regional director of the Fleet and Family Readiness Program.

Managers are required to perform surprise cash counts monthly, Moriarty said. A local auditor counts cash on a regular basis, as does an auditor from the Navy’s installation headquarters every 18 months.

When cashiers place their cash into a drop safe, they are supposed to do so in the presence of a manager, and both must verify the placement with their signatures. Daily sales activity reports compare the received cash to actual sales, Moriarty said.

“A criminal who’s bent on stealing from us is going steal from us, and we just try and make it as difficult as possible,” Moriarty said. “But there’s always targets of opportunity.”

Because the Navy is self-insured, a theft of MWR funds either reduces local spending or gets reimbursed from the Navy’s worldwide funds — which ultimately means less funding at a different location.