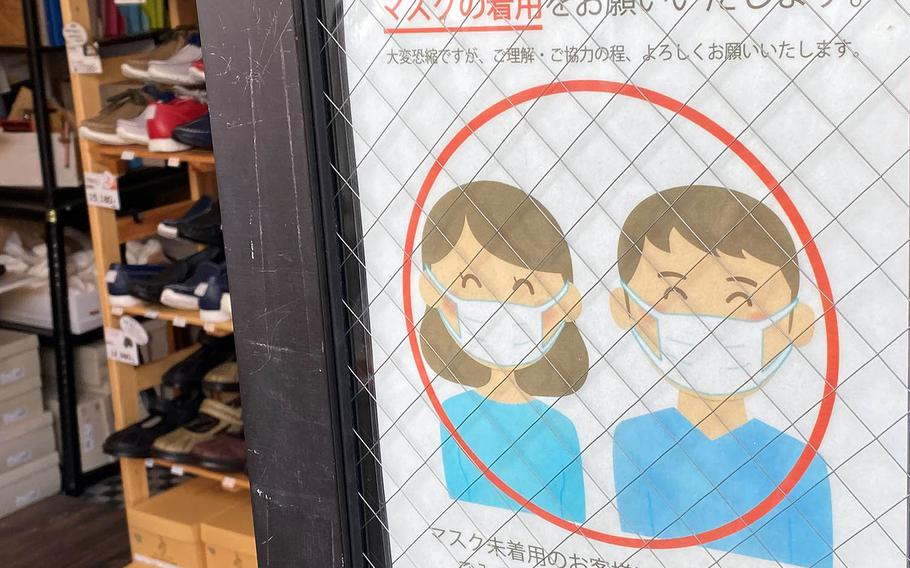 Buy Photo
A sign outside a shop in Kamakura, Japan, reminds patrons to wear a mask, Saturday, Oct. 3, 2020. (Aaron Kidd/Stars and Stripes)

Sasebo Naval Base in southern Japan announced a fifth patient the day after commander Capt. David Adams re-imposed tight restrictions on Wednesday to curb the virus' spread. The new case is a close contact of another patient and is in isolation, according to the base.

At Sasebo, further testing since Wednesday turned up the new patient, Adams announced on Facebook on Thursday evening. The base will likely remain under tight restrictions through the weekend, he wrote.

"We still need to allow for additional contact tracing and testing over the weekend to be certain that there was no further spread," Adams wrote on Facebook. "A decision will be made early next week if all goes well to return to the 'new normal.'"

Adams had ordered only essential travel off the installation, which is homeport for the amphibious assault ship USS America and its expeditionary strike group. Personnel living in the surrounding communities may travel only to the base and back for work or in the local area for essential services, such as school, medical appointments or grocery shopping.

His order also re-imposed bans on visits to malls or other retail shopping and patronizing dine-in restaurants, among other activities. Many services on base, such as fitness centers, barber shops and salons, are temporarily closed.

Defense Department schools on base, however, remain open.

NAF Atsugi reported its new patient turned up positive in a test required before exiting quarantine, according to a news release from the base. The individual is isolated and under medical supervision.

Atsugi has two active cases on base. It last reported a new patient on Tuesday.

At Yokota Air Base, the headquarters in western Tokyo of U.S. Forces Japan, the base commander further loosened coronavirus restrictions in place since spring.

Starting Friday, anyone age 18 and older affiliated with the base and holding a Defense Department ID card may bring one guest per cardholder on base. Up to eight guests are permitted for one ID card holder at the nearby Tama Hills Recreation Area.

The loosened guest restriction comes with rules: the sponsor must obtain a 24-hour pass and remain with their guest at all times, according to an order signed Wednesday by base commander Col. Andrew Campbell.

Campbell also expanded the “local travel” area to allow trips to Okinawa, leaving central Tokyo the only remaining area in Japan off-limits for Yokota service members, civilian employees and families. The metro area is generally off-limits to all U.S. military personnel in Japan.

At Yokosuka Naval Base, 41 miles south of Tokyo, the base commander on Thursday broadened the permitted travel area to include Gifu, Shiga, Fukui, Ishikawa, Fukushima and Tochigi prefectures, according to a post on the base Facebook page.

Many U.S. bases have incrementally eased restrictions in place since August as the number of coronavirus cases continues to fall.