An SU-30 Flanker of the Chinese air force is shown taxiing in this undated photograph. (Facebook)

An SU-30 Flanker of the Chinese air force is shown taxiing in this undated photograph. (Facebook) 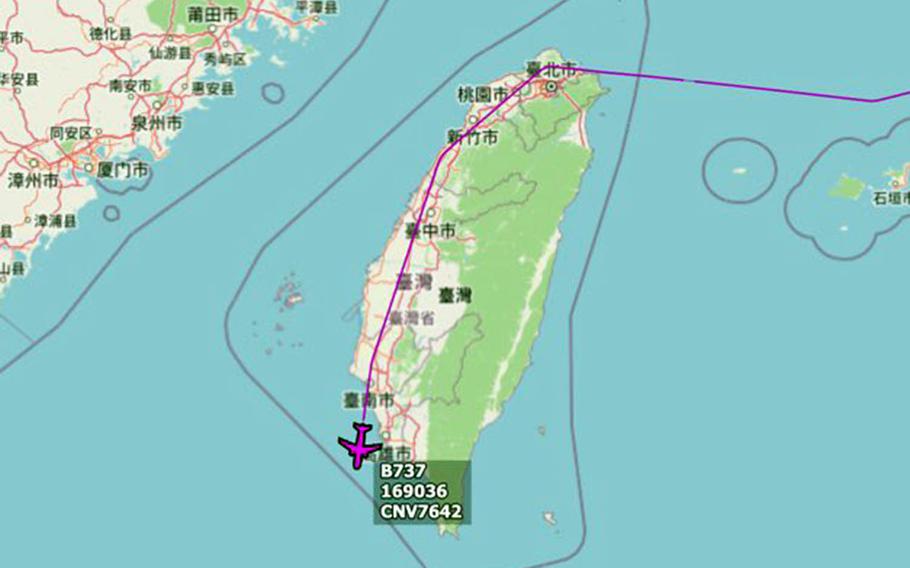 An image tweeted Tuesday by Golf9 purports to show the flight path of a U.S. C-40A Clipper aircraft around Taiwan on Tuesday, June 9, 2020. (Twitter)

The ministry said its aircraft had “broadcast warnings” to the Su-30 Flankers within the Taiwan air defense identification zone, or ADIZ. The Focus Taiwan news website said the ministry issued that statement at 12:30 p.m.

The same day, a U.S. C-40A Clipper transport plane, a military variant of the Boeing 737-700C commercial airliner, flew over the island with permission and without landing, according to a separate ministry statement. Taiwan media citing online flight trackers reported the U.S. flight originated in Okinawa at 8:53 a.m.

It’s not clear if the U.S. and Chinese military flights were linked. The Air Force’s 18th Wing at Kadena Air Base, Okinawa, did not immediately reply to an emailed request for further information on Thursday. Boeing builds Clippers for the U.S. Navy, according to the company website.

Golf9, a Twitter user who tracks military flights in the Western Pacific, tweeted at 10:15 a.m. Tuesday that the southbound Clipper had skirted Taiwan’s western coast. Taiwan News wrote Tuesday that U.S. military jets rarely fly over Taiwan’s airspace, preferring instead to fly in international waters around the island.

The ministry’s statement did not identify the type or number of its own aircraft involved. “Our aerial reconnaissance and patrol aircraft took full control of the aircraft and actively drove [them] away from the response area,” the statement said.

An ADIZ is a defined area extending beyond national territory where unidentified aircraft may be intercepted before they cross into sovereign airspace.