Buy Photo
Airmen from the 374th Civil Engineer Squadron survey a crater during training to quickly repair damaged runways, Thursday, May 6, 2021, at Yokota Air Base, Japan. (Seth Robson/Stars and Stripes)

Buy Photo
Airmen from the 374th Civil Engineer Squadron survey a crater during training to quickly repair damaged runways, Thursday, May 6, 2021, at Yokota Air Base, Japan. (Seth Robson/Stars and Stripes) 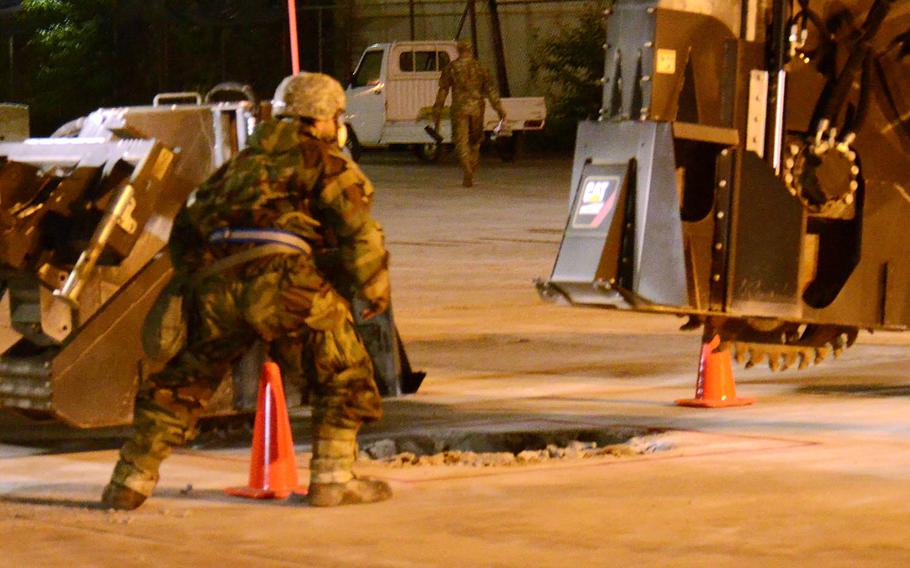 Buy Photo
An airman from the 374th Civil Engineer Squadron guides a concrete cutter while training to rapidly repair damaged runways during an exercise at Yokota Air Base, Japan, Wednesday, May 5, 2021. (Seth Robson/Stars and Stripes)

YOKOTA AIR BASE, Japan — Blades on concrete cutters whirred, bulldozers chugged and machinery bashed the ground during a recent symphony of destruction and reconstruction at the home of U.S. Forces Japan.

Airmen from the 374th Civil Engineer Squadron did an elaborately choreographed routine to repair a half-dozen holes in a parking lot not far from Yokota’s runway from late Wednesday until early Thursday.

The work, part of a spring readiness exercise, simulated the way engineers would rapidly repair the runway if there was a missile attack on Yokota. Potential adversaries in the region such as China and North Korea have potent missile forces that experts say are zeroed in on U.S. bases in Japan.

He compared the process to a factory production line of the sort pioneered by the Ford Motor Co. to build Model T automobiles in 1908.

It starts with airmen cleaning the area around a crater and surveying it. Machines with massive rotating blades move in to cut a square around the damaged area before a giant concrete breaker smashes up the material that is to be removed. An excavator lifts out the debris before the hole is filled with quick-set concrete.

Airmen responsible for each step in the process moved from crater to crater to get the job done rapidly. With so much heavy equipment moving around safety is a major concern, Velasquez said.

The process is organized “like a symphony” to ensure things go smoothly, he said.

Forty airmen were involved in the repair drill, but the squadron could mobilize 220 in an emergency, said Velasquez, the squadron’s operations superintendent responsible for infrastructure at Yokota.

The engineers repairing the craters are craftsmen with skills in things like plumbing, electrical repair and air conditioning maintenance but all need to know how to fix craters, Velasquez said.

Successful attacks on U.S. airfields have been few and far between in recent years, Velasquez said.

However, a team of engineers from the Air Force’s 1st Expeditionary Civil Engineer Group repaired a runway at Qayara Airfield West, Iraq, under hostile fire in 2016. The runway was damaged by Islamic State extremists who occupied the facility for two years.

Velasquez worked at Qayara and at Balad Air Base, Iraq, during a deployment from 2005 to 2006. U.S. forces came under regular attack while he was there but none of the insurgents’ weapons damaged runways.

“Luckily for us our enemy wasn’t well equipped,” he said.

How long it takes to get a bomb-damaged runway back online depends on the size of the craters, Velasquez said.

The repaired surface can survive a set number of aircraft passes before a more permanent fix that involves replacing an entire runway pad, he said.