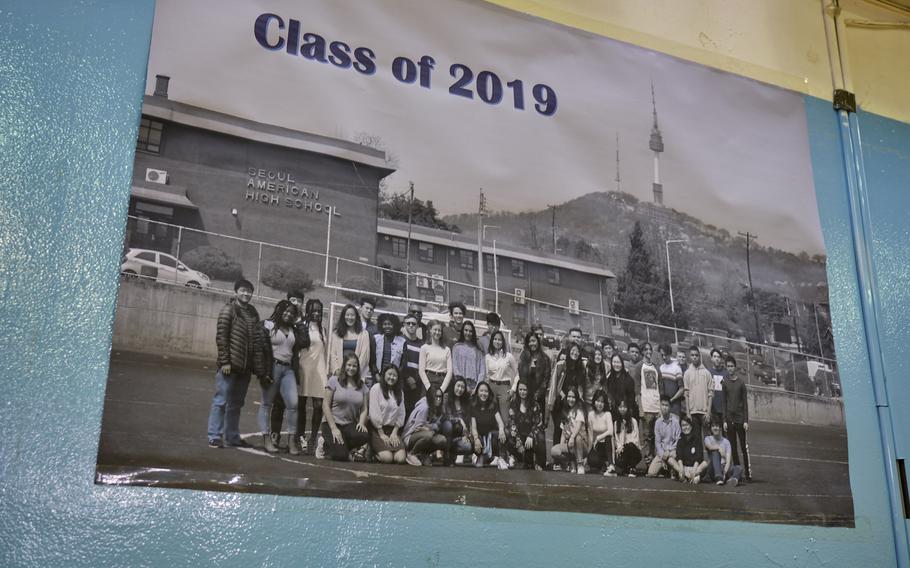 The final Seoul American High School class graduates Saturday, June 8, 2019, at the Falcon Gym. The last day of school at the entire complex is June 14. Administration and custodial staff are due to stay until June 28. (Matthew Keeler/Stars and Stripes)

The final Seoul American High School class graduates Saturday, June 8, 2019, at the Falcon Gym. The last day of school at the entire complex is June 14. Administration and custodial staff are due to stay until June 28. (Matthew Keeler/Stars and Stripes) 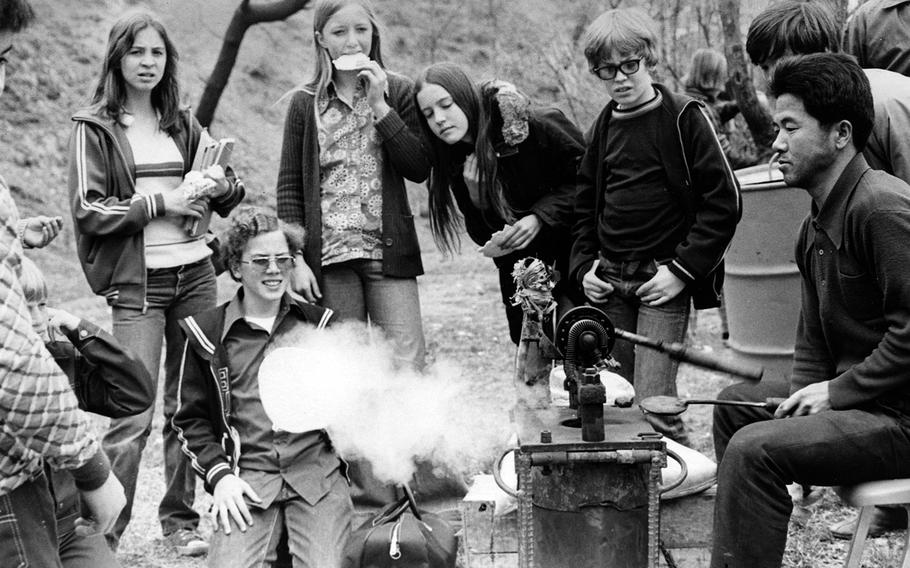 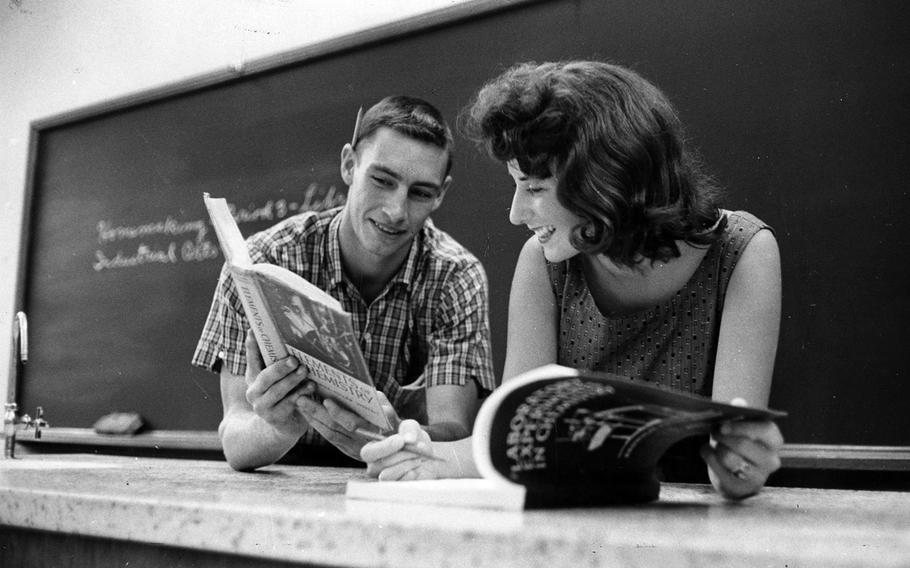 Seoul American seniors Bruce Church and Susan Scott look over their chemistry books on the first day of classes in September 1961. (Stars and Stripes) 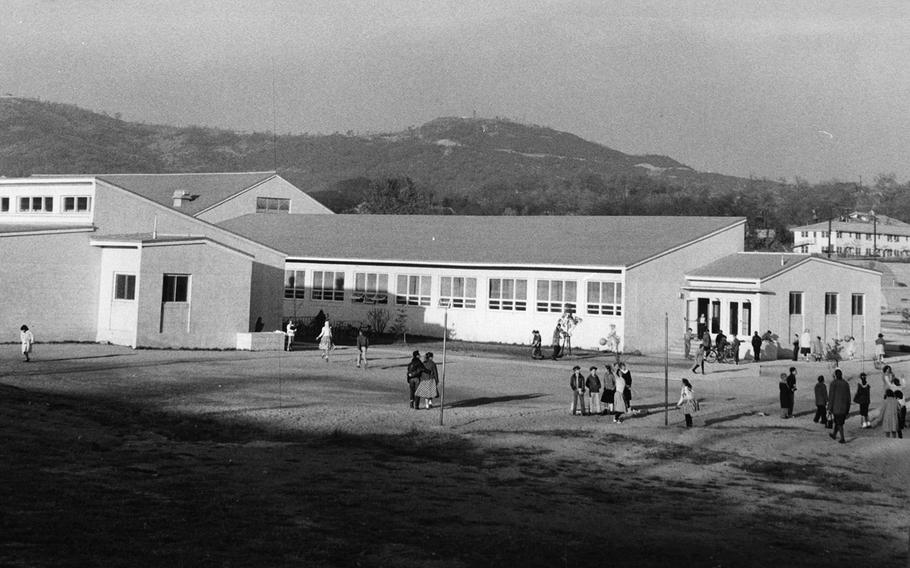 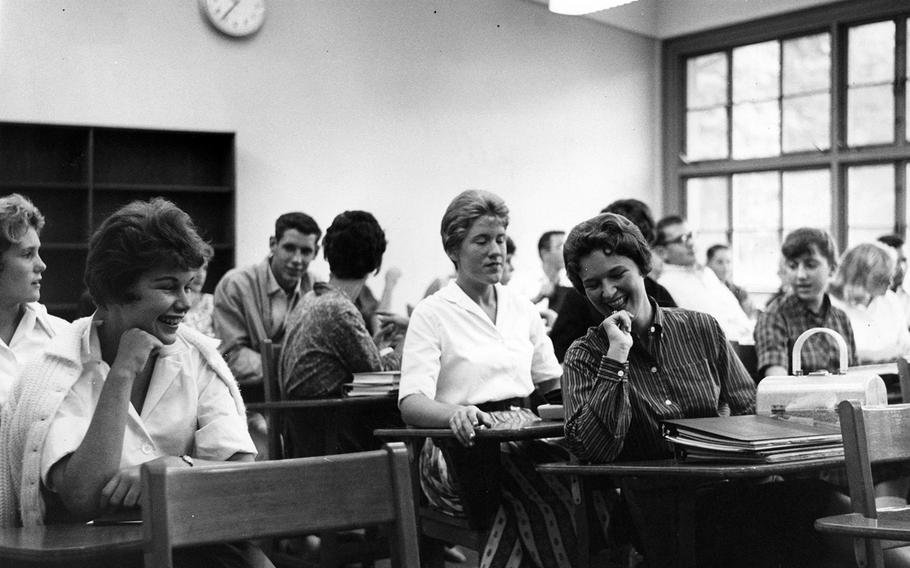 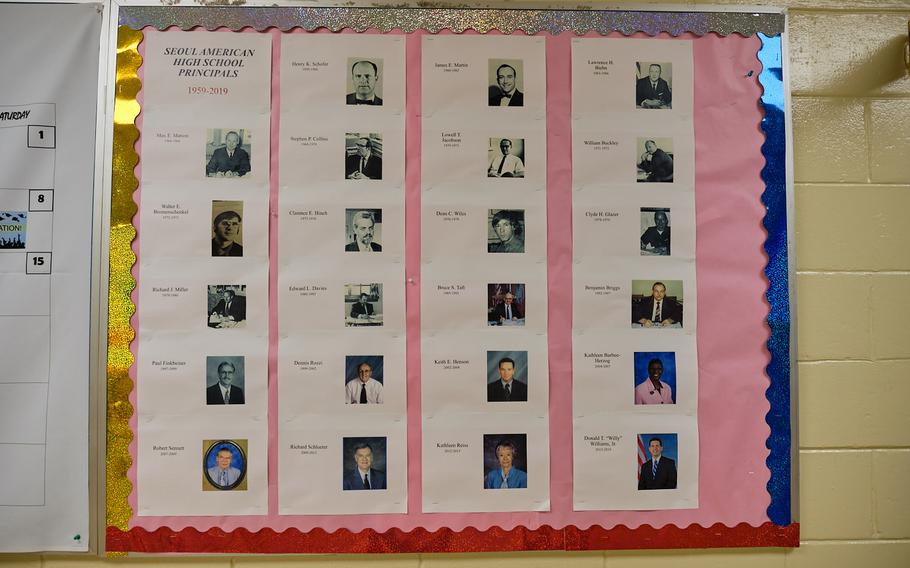 A bulletin board showing all the Seoul American High School principals since the school opened 60 years ago is seen on the campus at Yongsan Garrison, South Korea, Wednesday, June 5, 2019. (Matthew Keeler/Stars and Stripes) 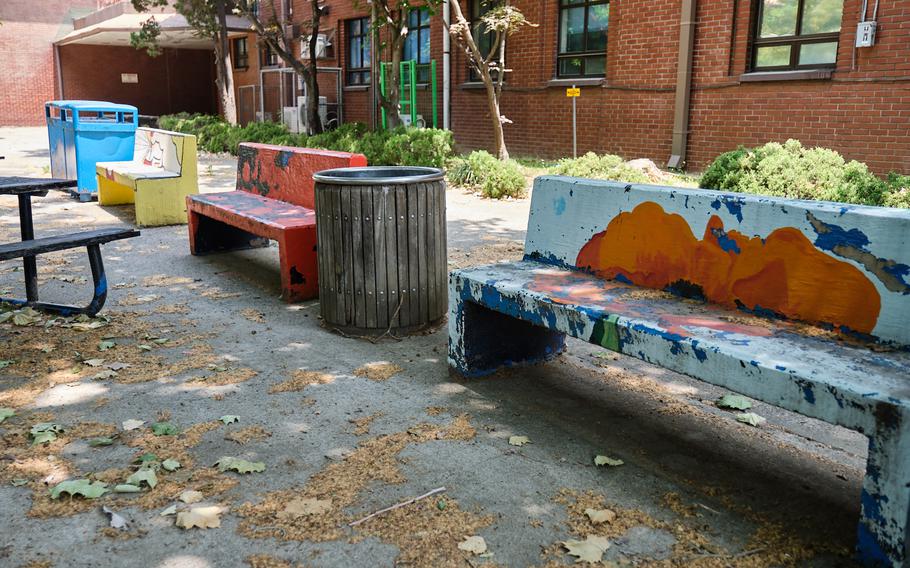 Benches painted over the years by Seoul American students are seen at the campus on Yongsan Garrison, South Korea, Wednesday, June 5, 2019. (Matthew Keeler/Stars and Stripes) 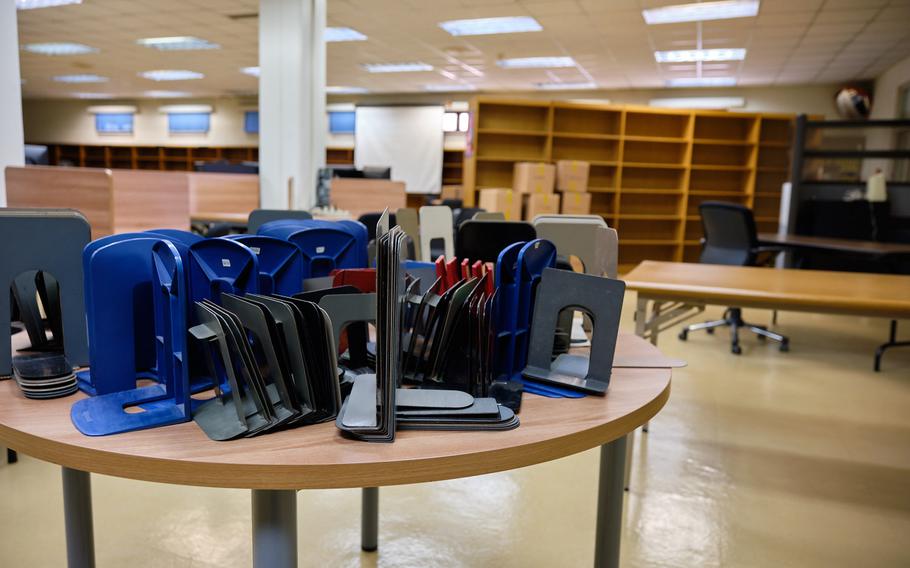 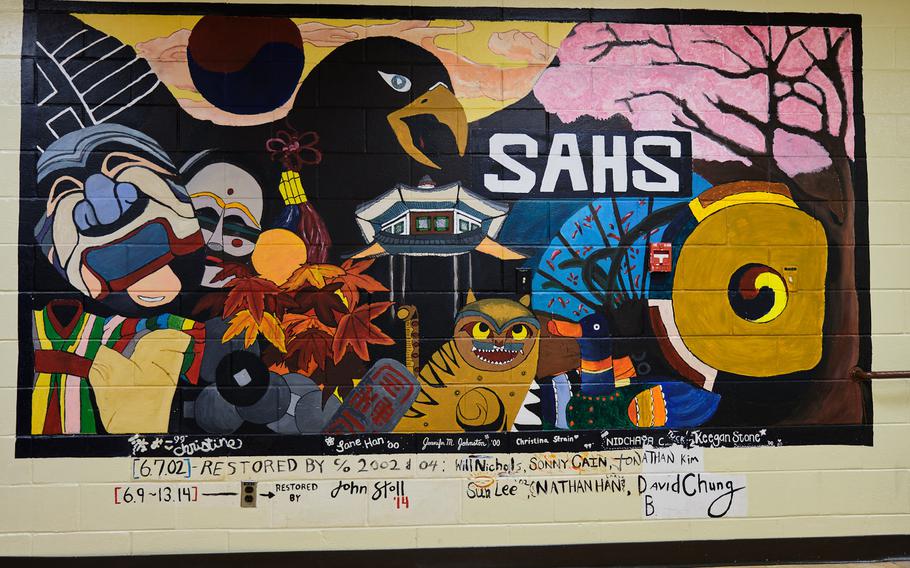 A restored mural that dates to the late 1990s is seen at the soon-to-be-closed Seoul American school complex, Wednesday, June 5, 2019. (Matthew Keeler/Stars and Stripes) 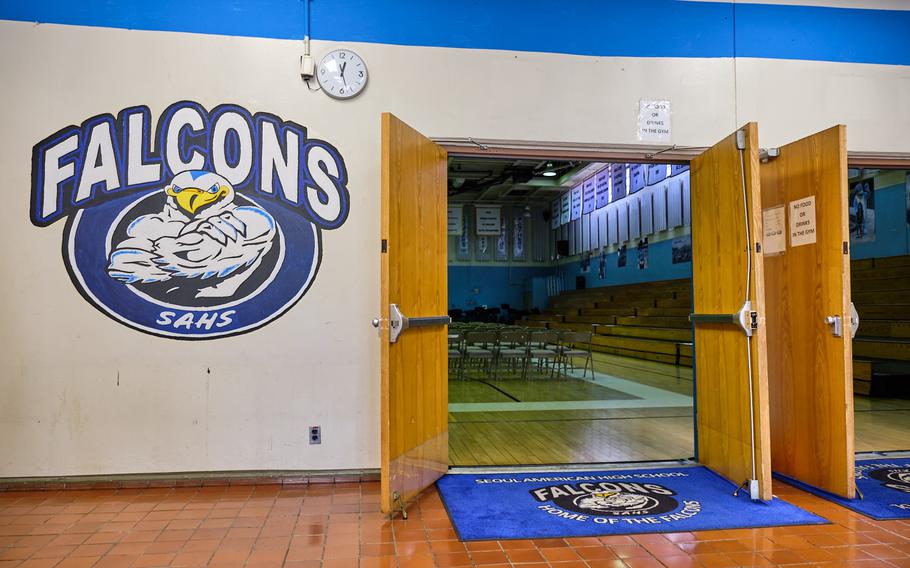 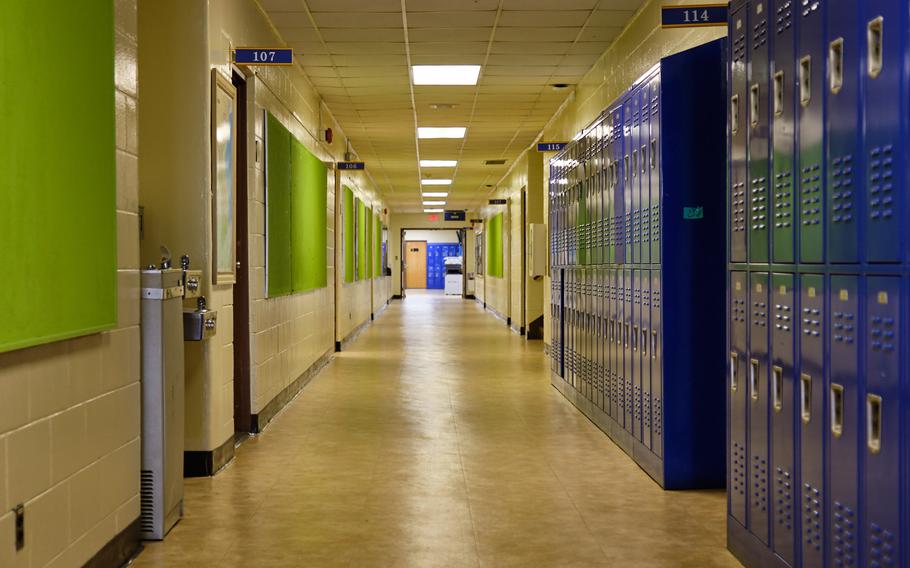 YONGSAN GARRISON, South Korea — Mary Jane Swecker and her three roommates had finished studying, were dimming the lights and turning in for the night in their dormitory room when they heard what sounded like firecrackers popping and muffled booms in the distance.

It was Sunday, Jan. 21, 1968, a bitterly cold winter evening on the Seoul American High School campus, with temperatures hovering just above zero — and amid a period of political turmoil.

Early the next morning Swecker’s father’s driver pounded on the dormitory door. The driver handed her a note from her father and some money.

“He said they would see me in the States if we were evacuated,” Swecker said. “We turned on the radio to discover what had happened the night before.”

A band of some 30 guerrilla fighters from North Korea had tried unsuccessfully to kill the South Korean president, Park Chung-hee, in what came to be known as the Blue House raid.

Two days later, the North seized the USS Pueblo and 82 of its sailors.

“Things got pretty exciting,” Swecker said. “It was interesting times there the next few months. The stories are numerous. Kids living in a dorm in a foreign country, height of the Vietnam War … just trying to feel like a normal kid.”

Of all the schools for U.S. military dependents, Seoul American has been closest to harm’s way — some 35 miles south of the Demilitarized Zone and North Korean bases just beyond.

But with the relocation of U.S. Forces Korea and the Eighth Army from Yongsan to Camp Humphreys almost complete, the Department of Defense Education Activity announced in November that the Seoul American complex would close for good this month. High school enrollment has tumbled from 618 in September 2014 to 146.

A closing ceremony took place Monday. The final high school class graduates at 10 a.m. Saturday at the Falcon Gym. The last day of school at the entire complex is June 14. Administration and custodial staff are due to stay until June 28.

“It’s going to be so sad,” said junior class president Hana Ro, who’s lived at Yongsan and gone to Seoul American schools all her life.

“It’s my home. I don’t know anywhere else,” said Ro, who will move to Humphreys High School for her senior year. “Same streets, same bowling alley, same tennis courts, same locker since my freshman year. It’s me. Everything from trophies to yearbooks and all the seniors when they come back to visit. It’s so bittersweet.”

“A special place at a special time,” said Gil Mueller, a former longtime Seoul American High School journalism and government instructor. “DODEA kids were on the front lines of the Cold War. The teachers taught it hands on.”

Housed at first in a group of Quonset huts near the old Army Community Services building on Yongsan’s South Post, Seoul American was a dormitory school from 1960-67. Today’s brick buildings opened in September 1982.

During that time, South Korea transitioned from a quasi-military autocracy in the 1960s and 1970s to a full-fledged democracy in the 1980s and one of East Asia’s most vibrant economies.

About 28,500 U.S. troops are stationed in South Korea, on guard since the U.S. and North Korea signed an armistice ending hostilities on July 27, 1953.

Aside from the occasional bomb threat, only on 9/11 did the schools close, when virtually every military installation and DODEA school worldwide shuttered for nearly a week.

“[The schools] did not overreact; the command did not overreact,” said Bob Collins, 69, a retired Army master sergeant who has been in Korea for more than 30 years. He was chief of strategy for the Combined Forces Command in the 1990s and 2000s. His son Aaron attended Seoul American, joined the Army and lived and worked in South Korea. Bob Collins lives in Songtan and writes books about North Korean politics and human rights.

Yongsan is “such a tight-knit community,” Collins said. “Lifestyles, safety, convenience, closeness — all great, all compact. And you’re as safe as in your mother’s arms.”

“You can literally walk out the gate and five minutes later be on a subway and go anywhere,” she said. “The transportation is great. The food. You can picnic on the Han River.”

While some “hairy” times passed in Seoul, “after a while, you start ignoring the saber rattling and recognize it for what it is,” said Bob Heckerl, 57, who’s been teaching in the Seoul American schools for 23 years.

Early days, dormitory stays Seoul was still recovering from three years of war when Seoul American started to educate students living on Army and Air Force installations stretching from Suwon to Busan. Students would commute between their homes and Seoul each weekend via train.

As Korea’s economy burgeoned in the mid- to late-1980s, infrastructure improvements, such as widening the country’s main Kyongbu Expressway, construction slowed what had been nominally a one-hour ride between Osan Air Base and Yongsan to as many as four hours in either direction.

More schools opened as time went by, in 1967 the Taegu and Pusan American schools, and in Osan an elementary school in 1980 and a high school in 1995.

In the 1960s, Seoul American students lived in dormitories, watched over by dorm dads and moms like Michael and Arline O’Brien, who met as Seoul American teachers in 1963 and married five years later.

At first, they said, they were antsy about the situation on the peninsula, but they adjusted over time.

“People used to ask, how could we stay here?” said Arline, who with Michael now lives in Hilo, Hawaii. “It wasn’t that scary. Once you figure it out, OK, do I want to be here? Yes. Am I willing to take the chances? Yes. Don’t worry about it and get all nervous and jerky.”

Dorm parents took on the same responsibility as real parents, the O’Briens said.

“You had to be thinking constantly to avoid problems,” Arline O’Brien said. “You did what you could; if you knew something was going on, you’d work it so the kids wouldn’t be in trouble, but they wouldn’t feel cheated.”

George May, class of 1976, started out at Seoul American living in the dorms during his elementary years and then moved to metropolitan Seoul.

“I had ‘Brah O’ for my second-grade art teacher” in fall 1964, May said, referring to Michael O’Brien.

O’Brien taught May tie-dye and batik in middle school and photography in high school. May happened to be on one of his biannual visits to Seoul when O’Brien and his wife prepared to retire to Hawaii in 1997.

“We’re still in touch with so many of those people,” Michael O’Brien said. “They’ve even been here to visit us in Hawaii.”

Unique school Michelle Pell, who taught at Seoul American from 1993-2005 and now teaches at Daegu Middle-High School, offered three reasons Seoul American stands out: Its student achievement, its heart and its generosity.

“In a class of 125 seniors, 75 would be in [advanced placement literature], the rest in regular English,” Pell said.

In times of need, the students at Seoul American stepped up, Pell said.

Through a school program that she sponsored called Renaissance, Pell organized a student walkathon that extended to the elementary school, the Eighth Army Band and Gen. Thomas Schwartz, at the time the commander of USFK.

“We raised $25,000, which was donated to two scholarship funds for the children of people killed in the World Trade Center and the Pentagon,” Pell said.

Two years later, during Operation Iraqi Freedom, they raised another $30,000 that was donated to scholarships for students whose parents were killed in the Iraq War, Pell said.

“Those are the greatest teaching experiences of my life,” Pell said. “I still get tears thinking about it.”

Sunset days Seoul American is in its final days. At the school library, only empty shelves remain; the books have been boxed up and sent to the other schools. The last regularly scheduled high school classes ended May 29.

Longtime school librarian Charles Woodruff, 65, a retired Army first sergeant, said that where possible, plaques and photos will be returned to families in the United States.

Seoul American teams last appeared in the DODEA-Pacific Far East spring sports tournaments. Softball player Priscilla Bright had a bow designed for the team with each of the players’ first names and the years 1959-2019 printed on each.

“I was really up to do that because I love history and I began to think of all the softball teams that played on those fields before us and thought that it would be a fun thing if we represented all of those before us in our last year,” said Bright, a senior.

All that’s left to do is the final graduation, the last day of school, the cleanup and lockdown.

“As the days go by, everyone’s starting to feel the emptiness,” said Kim, the student council president. “It really hurts my heart. It makes me want to cry.”

Scenes from the school Here are a few more final glimpses of Seoul American.

Principals through the years