Stranded in Seoul: An Army veteran is stuck in South Korea over a military conscription mix-up 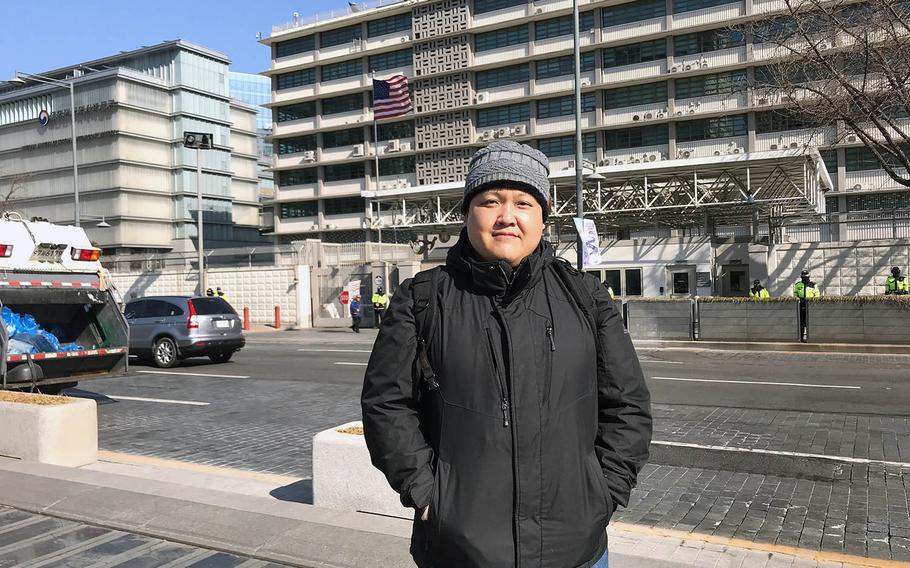 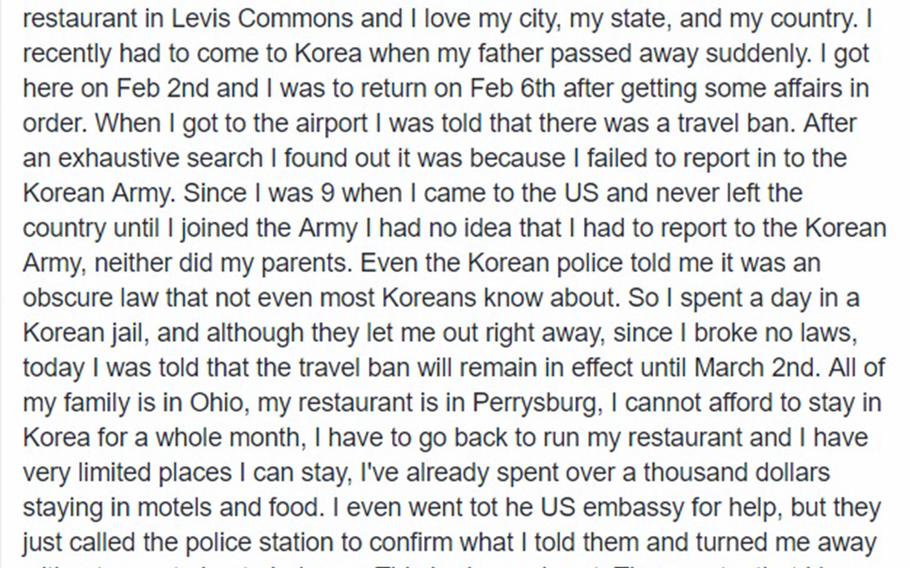 Tong Yi has received an outpouring of support from his community, fellow veterans and many servicemembers after he posted an appeal on Facebook. (Facebook screenshot)

SEOUL, South Korea — Tong Yi, a U.S. Army combat veteran from Ohio better known as Don, planned to be in South Korea for only a few days to attend his father’s funeral.

But the 40-year-old restaurateur has found himself stranded in Seoul after airport authorities prevented him from leaving the country Feb. 6.

It turns out he was on a watchlist for South Korean men who failed to serve their mandatory military service at home. But he didn’t learn that until later.

“At the airport they couldn’t tell me what was wrong. They just told me, ‘There’s a block on your travel. We don’t know why,’” he told Stars and Stripes in interviews this week.

Yi was told to go to a police station in Seoul, but it was closed for a holiday, so he had to wait.

The next day, police explained the allegation of draft dodging and jailed him for several hours while they figured out what to do.

American citizen Yi was born in Seoul but emigrated to the United States with his family at the age of 9 and received U.S. citizenship in 2011 while serving in the U.S. Army. He said it never occurred to him that he still had responsibilities in South Korea.

Yi served in the Army from 2004-12, including tours in South Korea and Afghanistan.

He said the conscription issue came up when he was assigned to South Korea the first time, in 2004, but authorities dismissed the problem because he was a soldier.

He assumed that was the end of it, but he was flagged when trying to fly home on Feb. 6 after his first trip as a civilian.

Yi said authorities have acknowledged that he had no obligation to serve but detained him because he had not submitted the required notification about his citizenship plans when he turned 18.

“They just considered me as somebody who skipped the conscription, which wasn’t the case,” Yi said.

He was released from custody but was barred from leaving the country until at least March 2 pending an investigation.

“My heart just sank when they told me that,” Yi said Monday before going to discuss his case at the U.S. Embassy.

An official at the Jongno police station confirmed that Yi was being investigated for violation of the Military Service Act and said the case would be sent to the prosecutor’s office. He did not provide more details.

Conscription confusion Yi’s plight reflects the frequent confusion of Korean-Americans due to strict conscription laws and a longtime alliance that often leads to families having ties in both countries.

South Korea, which has faced a threat from heavily armed North Korea since their 1950-53 war that ended in stalemate, requires all able-bodied men to serve at least two years in the military.

The law compels those with multiple citizenships to choose their nationality when they turn 18. If they fail to choose another nationality, they must fulfill service with South Korea.

One American man was forced into the South Korean military even though he was born in Champaign, Ill., to immigrant parents.

Yi was born in South Korea but said he had no idea that he was wanted in his native country when he planned the emergency trip after learning his father had died while visiting relatives here.

Overwhelming support Yi didn’t even have a passport and faced delays in getting one because government offices in Ohio were closed due to the polar vortex earlier this month.

He finally arrived Feb. 3 but missed the funeral. “At least I got to visit his grave site to say farewell,” Yi said.

Following his detention, Yi spent hundreds of dollars on hotels and food as he shuffled between police and American officials to try to find a way out.

Yi is currently staying with extended family north of Seoul but is worried about his restaurant called Tea Tree Asian Bistro in Perrysburg, Ohio. His sister took a leave from her full-time job to help this week, but they’re going to have to scramble after that.

Yi has received an outpouring of support from his community, fellow veterans and many servicemembers after he posted an appeal on Facebook.

“I’m just thankful that I am getting a lot of support from my community back at home. That’s keeping me going right now,” he said.

Friends also started a GoFundMe page that as of Tuesday had raised more than $2,500 to help Yi.

U.S. Rep. Bob Latta said his office has “reached out to the appropriate governmental agencies to see what can be done to find a resolution.”

“Because of the sensitive nature of this case, we aren’t able to share specific details,” the Republican congressman wrote on Twitter.