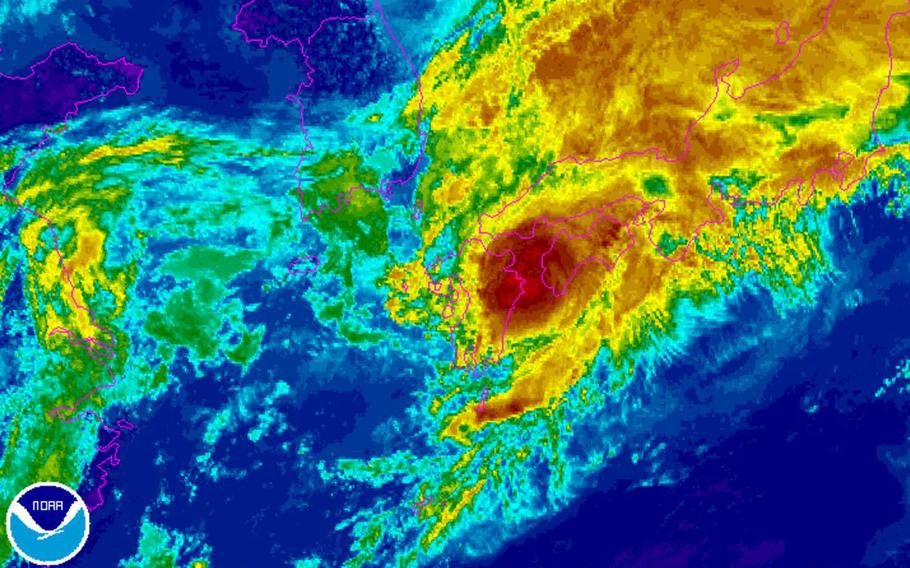 It will remain a bit wet and windy for a while, followed by rapid clearing. Check carefully for flooding and downed branches and limbs.

Nanmadol is diminishing rapidly; it reached the coast packing just 46-mph sustained winds and 58-mph gusts, down from the near-typhoon strength it had yesterday evening.

It’s moving east-northeast at 29 mph and should roll 58 miles south of Marine Corps Air Station Iwakuni by 1 p.m., then through the Tokyo area by around midnight as a tropical depression, 35-mph sustained winds and 46-mph gusts.

Unless something changes, this should be the last update on Nanmadol. PST out.

Sasebo and its properties remain in Tropical Cyclone Condition of Readiness 1. Expect an upgrade to TCCOR 1-E about 7 a.m. as Nanmadol's center windbands come crashing ashore.

Expect Nanmadol to next pass 50 miles south-southeast of Marine Corps Air Station Iwakuni about five hours later, then almost directly over Yokosuka Naval Base around 2 a.m. Wednesday, still packing 35-mph sustained winds and 52-mph gusts. No accelerated TCCORs in either locale at this point.

-- The Base Galley will remain open for scheduled meals throughout Tropical Cyclone Condition of Readiness levels.

-- The Main Base Mini Mart secured at 8 p.m. Monday

-- All other services secured at TCCOR 1 at 7 p.m. Monday and remain closed until TCCOR ALL CLEAR is issued Tuesday (time to be determined).

-- Main Base Main Gate will be secured at TCCOR 1-E (emergency). Main Base Tategami Gate and all other facility gates will remain manned and open only to emergency essential personnel.

-- Emergency shelter is available at Main Base for personnel displaced from their off-base residences.

It's due to make landfall at about 9 a.m. Tuesday, 36 miles south-southeast of Sasebo, still fielding that same intensity as it roars ashore.

Sasebo and its satellite properties remain in Tropical Cyclone Condition of Readiness 2. Fleet Activities Sasebo's Facebook page states that TCCOR 1 should be directed at 7 p.m. Expect 69-mph sustained winds and 86-mph gusts between 7 and 11 a.m. Tuesday.

From there, Nanmadol is forecast to track 47 miles south-southeast of Marine Corps Air Station Iwakuni by 2 p.m. Tuesday and about 12 miles north of Yokosuka Naval Base at 3 a.m. Wednesday, still packing 40-mph sustained winds and 52-mph gusts into morning.

Not too late to make preparations. Sasebo, Iwakuni, Kanto, get your safe on! PST out.

12:15 p.m. Monday, July 3, Japan time: Nanmadol has intensified slightly and could reach typhoon strength by Monday evening before turning northeast toward Sasebo Naval Base, according to the Joint Typhoon Warning Center’s latest update. Nanmadol, about 220 miles west of Kadena Air Base and headed north-northeast at 16 mph, is forecast to pass 186 miles west-northwest of the base by 2 p.m., reaching peak intensity of 69-mph sustained winds and 86-mph gusts as it curves northeast. Landfall is forecast for 9 a.m. Tuesday about 30 miles south of Sasebo, still maintaining that intensity at center.

Bases on Okinawa remain in seasonal Tropical Cyclone Condition of Readiness 4, while Sasebo and its satellite properties remain in TCCOR 2; expect an upgrade to TCCOR 1, sometime early Tuesday morning, perhaps even higher. If you haven’t begun preparation for Nanmadol’s arrival, now’s the time to do so.

Nanmadol should next pick up speed and rapidly roll 41 miles south of Marine Corps Air Station Iwakuni around 2 p.m. Tuesday, then pass almost directly over Yokosuka Naval Base and south of the rest of the Kanto Plain bases, still packing 52-mph sustained winds and 63-mph gusts.

6:20 a.m. Monday, July 3, Japan time: The good news: Nanmadol remains forecast to top out at 63-mph sustained winds and 81-mph gusts, below typhoon strength, as it curves northeast toward landfall over Kyushu by mid-morning Tuesday.

The bad news: Nanmadol is expected to maintain tropical-storm strength even as it makes its way overland, past Sasebo Naval Base, Marine Corps Air Station Iwakuni, all the way to the Tokyo-Kanto Plain area into Wednesday morning.

At 3 a.m., Tropical Storm Nanmadol was 267 miles west-southwest of Kadena Air Base, Okinawa, chugging north-northwest at 15 mph, maintaining sustained 52-mph winds and 63-mph gusts. Nanmadol is projected to pass 217 miles west of Kadena at 11 a.m., some gusts and a few heavy showers here and there.

Bases on Okinawa remain in seasonal Tropical Cyclone Condition of Readiness 4, while Sasebo can expect upgrade to TCCOR 2 at any moment. PST out.

11:30 p.m. Sunday, July 2, Japan time: Not much change regarding Tropical Storm Nanmadol. Forecast track has edged a bit closer to Okinawa, but still a far piece away.

But expect a gusty, showery Monday evening, Tuesday and Wednesday if you're in the area of Sasebo Naval Base, Marine Corps Air Station Iwakuni and Tokyo.

Fleet Activities Sasebo and its satellite properties remain in Tropical Cyclone Condition of Readiness 3; expect an upgrade to TCCOR 2 at 6 a.m. Monday. Bases on Okinawa remain in seasonal TCCOR 4; that's not expected to change, but you never know.

Nanmadol is forecast to remain a tropical storm as it rumbles 33 miles northwest of Sasebo at about 9 a.m. Tuesday, then about 20 miles north of Iwakuni about five hours later and 40 miles north of the Tokyo-Kanto Plain area early Wednesday morning as a mild tropical depression.

Get your safe on. PST out.

Destructive winds of 58 mph or greater are possible within 48 hours. CFAS can expect TCCOR 2 to be set at 6 a.m. Monday.

While Nanmadol is picking up strength, its forecast track remains well west of Okinawa ... while it may arc closer to Sasebo Naval Base than previously forecast, with slightly stronger winds. JTWC projects Nanmadol to peak at 63-mph sustained winds and 81-mph gusts at mid-afternoon Monday.

At 3 p.m., Nanmadol was 337 miles south-southwest of Kadena Air Base, cruising northwest at 20 mph, with 40-mph sustained winds and 52-mph gusts at center.

If it remains on forecast track, Nanmadol should roll about 230 miles west of Kadena around 9 a.m. Monday, then take a wide arc toward northwest Kyushu, within 25 miles northwest of Sasebo by 10 a.m. Tuesday and 33 miles northwest of Marine Corps Air Station Iwakuni about five hours later.

It should still be a fairly strong tropical storm as it reaches Kyushu, could still be packing 58-mph sustained winds and 75-mph gusts as it heads that way, could be slightly less. It's still early in the life of a brewing storm.

For the moment, U.S. bases on Okinawa remain in seasonal Tropical Cyclone Condition of Readiness 4. We'll try to keep that updated as quickly as possible.

Well southeast of Japan, a new tropical disturbance, 90W Invest, is making its way through the Marianas main islands. The National Weather Service on Guam projects showers and isolated thunderstorms through Monday.

1 p.m. Sunday, July 2, Japan time: First warning has been issued on the fifth numbered tropical cyclone of the season: Nanmadol, which is forecast to peak as a middling tropical storm and pass fairly close to Sasebo Naval Base, making for a wet, gusty July 4 there.

Doesn't appear at this moment as if Nanmadol may threaten Okinawa. U.S. bases on island remain in seasonal Tropical Cyclone Condition of Readiness 4. Nanmadol is on the Philippines' weather authority PAGASA's radar as Emong; no public storm warning signals have been raised there.

Joint Typhoon Warning Center projects Nanmadol to pass 206 miles west of Kadena Air Base about 6 a.m. Monday and 54 miles northwest of Sasebo at about 9 a.m. Tuesday. Nanmadol is forecast to peak at 52-mph sustained winds and 63-mph gusts as it moves north on Monday and curves northeast early Tuesday.

4:30 p.m. Saturday, July 1, Japan time: A tropical cyclone formation alert has been issued on a system developing about 800 miles south of Okinawa by the Joint Typhoon Warning Center.

Dynamic model guidance is in tight agreement on the system passing well to Okinawa’s southwest, with Ishigaki Island in the crosshairs. It might also affect the east coast of Taiwan.

None of the models in question show especially strong development at this point, perhaps a tropical depression or tropical storm. But it's too soon to tell. These things are unpredictable buggers.

Either way, we’ve got our eyes all over it. PST out.

Joint Typhoon Warning Center has it labeled as a “medium area,” meaning the chances of it forming into a tropical cyclone in the next day or so are medium.

Fairly good agreement among dynamic model guidance at this point that 99W should track northwest, but with very limited development according to JTWC, between Taiwan and Okinawa in the general direction of Ishigaki and Miyako islands in the next three days or so.