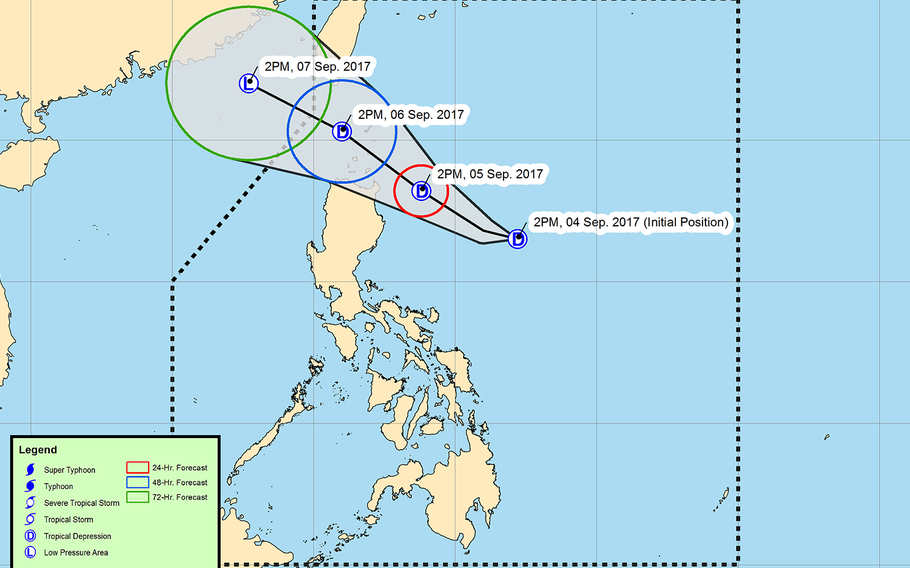 6:45 a.m. Thursday, Sept. 7, Philippines time: Guchol has exited the Philippines area of responsibility, it continues to deteriorate and is forecast to die out over the Formosa Strait. Assuming it doesn’t regenerate, this is the last update on Guchol.

Noon Wednesday, Sept. 6, Philippines time: All tropical cyclone warning signals for the northern Philippines islands have been dropped, according to national weather authority PAGASA, as Tropical Depression 19W heads west out of the Philippines’ area of responsibility. The question remains, where is 19W’s final destination?

At 8 a.m., 19W was 419 miles east-southeast of Hong Kong, headed west-northwest at 13 mph, holding steady at 35-mph sustained winds and 46-mph gusts. Joint Typhoon Warning Center projects 19W to peak at its current wind values, though it may possibly increase to minimal tropical-storm strength as it heads toward southeastern China. JTWC forecasts 19W to pass 288 miles northeast of Hong Kong at 9 p.m. Thursday.

7 a.m. Wednesday, Sept. 6, Philippines time:Joint Typhoon Warning Center resumed issuing warnings on Tropical Depression 19W, which is headed through the small northern islands off the coast of the Philippines’ Luzon island. Tropical Cyclone Warning Signal 1 remains raised for the Batanes and Babuyan island groups, according to the weather authority PAGASA.

Meanwhile, the CMC ensemble calls for landfall over southeastern China and a curve northeast, toward southwestern Japan or southeastern Korea.

8 p.m. Tuesday, Sept. 5, Philippines time: Joint Typhoon Warning Center issued its final warning on Tropical Depression 19W at mid-day Tuesday. But the system dubbed Kiko in the Philippines is still having some effect on that country’s northern islands.

At 4 p.m., Kiko was 167 miles east of Calayan in the Cagayan region, headed north-northwest at 12 mph with just 23-mph sustained winds at system’s center. Tropical Cyclone Warning Signal 1 remains raised for the Babuyan and Batanes island groups as well as northern Luzon, according to the country’s weather authority PAGASA.

6:45 a.m. Tuesday, Sept. 5, Philippines time: It doesn’t appear as if it will amount to much, but Tropical Depression 19W is on the map and, according to the Joint Typhoon Warning Center, headed toward southern China, as was the case with three cyclones before it.

At 2 a.m., 19W was 300 miles east-northeast of Manila, headed west-northwest at 13 mph with 35-mph sustained winds and 46-mph gusts. 19W is forecast to clip the northern edges of Luzon island. Tropical Cyclone Warning Signal 1 has been raised for northern Luzon and the Babuyan and Batanes island groups.

If it remains on its current path, 19W is forecast to peak at 52-mph sustained winds and 63-mph gusts at mid-afternoon Wednesday, before forecast landfall sometime Thursday evening over southeastern China. 19W is projected to pass 121 miles northeast of Hong Kong at 10 p.m. Thursday.

That’s what folks in Hong Kong might be saying in the next day or so, if the initial forecast track belonging to a developing disturbance east of the Philippines remains on its current path.

Joint Typhoon Warning Center issued a tropical cyclone formation alert at mid-afternoon on the disturbance, which was 530 miles north-northeast of Manila at 1:30 p.m.

The Philippines weather authority PAGASA noted the system and has named it Kiko.

The initial track takes Kiko between Luzon and Taiwan and in the general direction of Hong Kong – right on the heels of three other tropical cyclones that have raked southeastern China in the last four weeks.