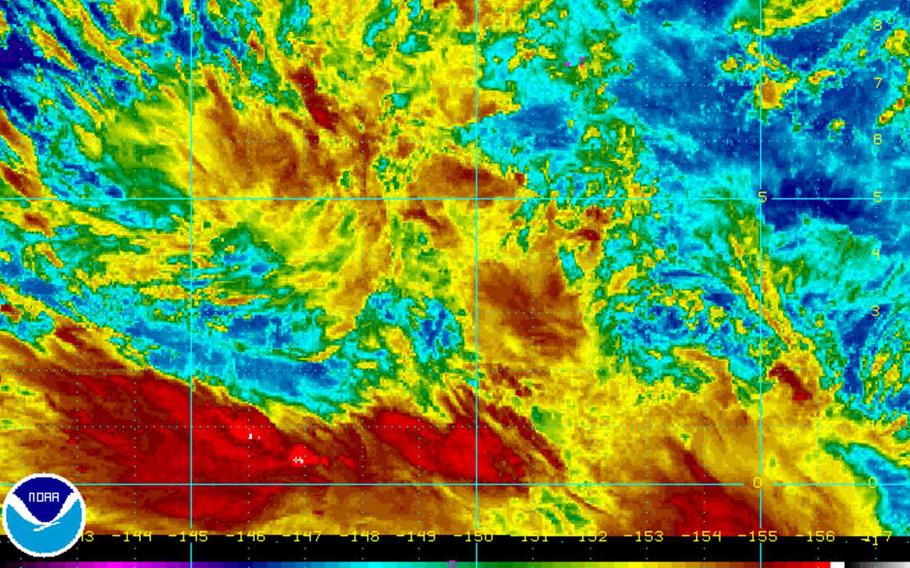 5:30 p.m. Saturday, April 15, Philippines time: 02W won't have a long life as a tropical depression, but the central Philippines can expect a wet, windy Easter weekend as it and its remnants cross the islands. 02W maxed out at 30-mph sustained winds and 35-mph gusts. It's forecast to make landfall over southeastern Samar and make its way across the Visayas, then back over the South China Sea. But atmospheric conditions should prevent it from regenerating. Public Storm Warning Signal 1 remains in effect for the Visayas and southern Luzon, according to the national weather authority PAGASA. This should be PST's last report on 02W; we'll watch for signs of regeneration.4:20 p.m. Friday, April 14, Philippines time: A wet, windy Easter weekend is in store, indeed, as the Joint Typhoon Warning Center issued its first warning on Tropical Depression 02W, headed toward the country's central islands. At 2 p.m., 02W was 654 miles east-southeast of Manila, headed west-northwest at 11 mph, with 30-mph sustained winds and 35-mph gusts at its center.Initial forecast track and dynamic model guidance depicts 02W as passing through Samar into the Visayas islands, remaining a strong tropical depression as it exits into the South China Sea Easter Sunday afternoon. Very early in the life of a storm, so PST will keep an eye out for futher developments. If it becomes a named storm, 02W will be called Muifa.7:20 p.m. Thursday, April 13, Philippines time: Joint Typhoon Warning Center issued a tropical cyclone formation alert on Invest 92W. Model guidance remains varied; some models depict a weak tropical depression, while others indicate no significant development in the next couple of days. Be it as a low-pressure area or a tropical depression, models do show 92W headed through the central Philippines, making for a wet, gusty Easter weekend.2:45 p.m. Thursday, April 13, Japan time: For certain, Invest 92W is back; the question remains, how much of an effect it may have on the Philippines over Easter weekend. Model guidance continues to show 92W tracking across the central Philippines in the same area that Haiyan affected nearly 3 1/2 years ago, but not nearly in the same ballpark strength-wise. More than likely, the Philippines should have a rainy, somewhat blustery weekend with thundershowers, some heavy at times. It could become a tropical cyclone of some sort, but a typhoon is likely out of the conversation.4 p.m. Wednesday, April 12, Japan time: Joint Typhoon Warning Center published an advisory an hour ago, stating that Invest 92W has dissipated and is no longer suspect for development into a tropical cyclone in the next 24 hours. PST will keep an eye on it in case it changes its mind.4 p.m. Tuesday, April 11, Japan time: Developing into something ... or much ado about nothing? That's been the narrative the last day or so as PST has kept an eyeball on 92W Invest, which continues to lurk southwest of Guam and southeast of the Philippines. Model guidance has wavered between 92W turning into something semi-sort of big and becoming little more than a mass of heavy showers headed toward the Philippines, then curving east toward Okinawa. Still way too early in the game to know for sure. PST remains vigiliant.Noon Monday, April 10, Japan time: Much like last year, we’ve had a quiet start to the 2017 Pacific typhoon season, just one numbered storm, a tropical depression, in early January, according to the Joint Typhoon Warning Center.

That may change in the next 10 days. Forecast models depict a disturbance about 330 miles south-southwest of Chu’uk in Micronesia and 800 miles south-southeast of Guam. Those models indicate a track headed generally northwest, grazing the Philippines’ northernmost island of Luzon a week or so from now, followed by a curve northeast toward Okinawa.

The National Weather Service in Guam says the island and its northern Marianas companions should be well out of harm’s way, but will see an uptick in showers and winds by mid-week. Yap and Palau should see showers and thunderstorms by Thursday as the system heads northwest.

Models show 92W peaking as a tropical depression or tropical storm as it edges just east of Luzon, then begins curving southeast of the Ryukyu Islands about 10 days from now.

Shouldn’t affect Okinawa much, as the sea-surface temperatures are still too cool to support a full-blown typhoon at this point. But one never knows, given the vagaries of weather. PST will keep an eye on it.