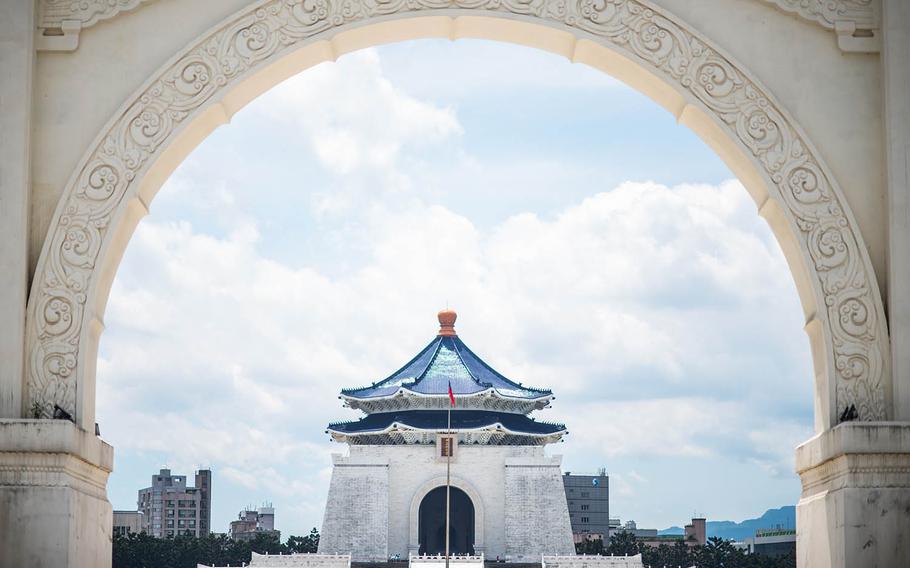 A Taiwanese flag flies in front of National Chiang Kai-shek Memorial Hall in Taipei in this undated photo. (Pixabay)

The State Department on Tuesday canceled U.S. envoy Kelly Craft’s planned visit to Taiwan this week as tensions with China increased following the removal of limits on U.S. diplomatic contacts with the self-governing island.

Pompeo canceled his Europe trip at the last minute Tuesday after top officials of the European Union declined to meet with him, according to a Reuters report that cited U.S. and European diplomats.

The State Department cited ongoing “transition efforts” with President-elect Joe Biden’s team as the reason behind the canceled visits. Biden will be inaugurated on Jan. 20.

“We are expecting shortly a plan from the incoming administration identifying the career officials who will remain in positions of responsibility on an acting basis until the Senate confirmation process is complete for incoming officials,” the department said in the statement. “As a result, we are cancelling all planned travel this week.”

Craft was due to arrive four days after Pompeo lifted longstanding restrictions on contact between U.S. and Taiwanese government officials. U.S. officials are now permitted to engage with Taiwanese leaders as they would with diplomats and officials of other nations.

The move irked China, which considers Taiwan a breakaway province and has made reunification a national goal. The U.S. acknowledges that Beijing claims Taiwan under its “One China” policy but views the island’s status as unsettled.

Foreign Ministry spokesman Zhao Lijian at a Tuesday press conference denounced Pompeo’s lifting of diplomatic curbs with Taiwan. He said the U.S. in a 1979 China-U.S. agreement on diplomatic relations pledged to hold only “unofficial relations with the people of Taiwan,” according to a transcript.

“It is the solemn pledge of the U.S. side not to have official interactions with the Taiwan region,” Zhao said, according to the briefing transcript. “It should honor its commitment and not misinterpret or deviate from it under any pretext.”

Zhao, during a Monday press conference, called Taiwan’s status “the most important and sensitive issue at the core of China-U.S. relations.”

Hours before the trip was canceled, Pompeo on Tuesday declined to answer a question from conservative radio host Hugh Hewitt regarding possible Chinese provocations in response to Craft’s visit, according to a transcript of the interview. However, Pompeo encouraged the Biden administration to continue interactions with Taiwan and not bend “its knee to China.”

“These actions aren’t provocative; they aren’t intended in that way,” Pompeo said, according to the transcript. “They are intended to fulfill the commitments that we have made to all the parties in the region.”

Though Craft’s visit was canceled, U.S. Ambassador to the Netherlands Pete Hoekstra on Monday welcomed Taiwan’s representative, Chen Hsing-hsing, to the U.S. Embassy in The Hague, according to his Twitter account.

“Made some history today: Welcomed Taiwan Representative Chen to our Embassy,” Hoekstra tweeted Monday. “Glad that our @StateDept colleagues around the world will now be able to host our friends from this vibrant democracy on our Embassy grounds.”