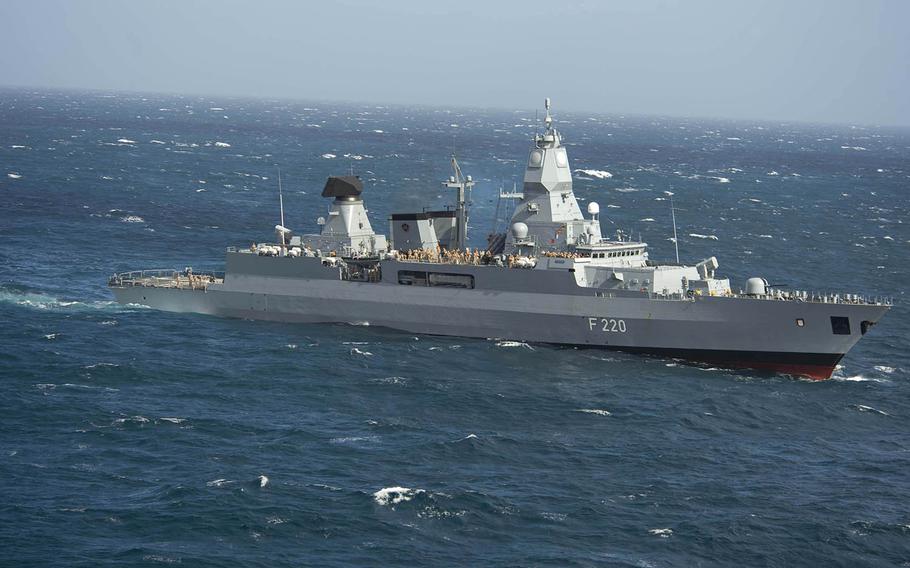 The State Department has applauded Germany’s plans to send a warship through the South China Sea this summer, calling it a contribution toward preserving open seas, Reuters reported Thursday.

The German Ministry of Defense on Twitter early Friday announced its plan to send a frigate through the contentious sea for the first time since 2002.

“We will send a frigate to the Indo-Pacific from August 2021 to February 2022,” the ministry tweeted. “In doing so, we are implementing the guidelines and are showing ourselves more strongly as a creative actor in the region.”

The ministry added that its goals for the mission are to support “a rule-based order,” “free sea routes” and “multilateralism.” It did not say which frigate it would be sending.

An unnamed State Department spokeswoman on Wednesday welcomed “Germany's support for a rules-based international order in the Indo-Pacific,” according to Reuters.

“The international community has a vital stake in the preservation of an open maritime order,” she said, according to the report.

Berlin’s announcement comes two months after it adopted new strategic policy guidelines for the Indo-Pacific region, which in part call for “a possible expansion of its security commitment” there, the defense ministry said in a Feb. 9 statement.

“With the rise of Asia, the political and economic balance is increasingly shifting towards the Indo-Pacific,” the guidelines state, according to the defense ministry statement. “The region is becoming the key to shaping the international order in the 21st century.”

The United States for years has encouraged its allies and partners to support its efforts to promote free and open navigation in the Indo-Pacific. The Navy has held a dual-carrier exercise and two freedom-of-navigation operations in the South China Sea in the past month alone.

Berlin will become the fourth NATO member this year to send a warship to the South China Sea as Washington continues to challenge China’s territorial claims in those waters.

France sent a submarine through the sea in early February and has two warships en route to the region now, according to the French navy. Britain is scheduled to send its aircraft carrier HMS Queen Elizabeth to the waters later this year.

Beijing claims nearly all the South China Sea as its own despite a 2016 United Nations ruling to the contrary. The U.S. challenges those claims by conducting regular patrols, military exercises and operations in the South China Sea, to which China routinely objects.

Asked at a news briefing Wednesday about Berlin’s plans, Chinese Foreign Ministry spokesman Wang Wenbin said foreign navies should not use passage through the South China Sea to challenge its claims.

“Countries enjoy the freedom of navigation and overflight in the South China Sea as stipulated in international law, but they cannot take it as an excuse to undermine the sovereignty and security of littoral countries,” he said, according to a transcript of the briefing.

Beijing bases its claims on a Chinese map from 1947 that includes a nine-dash line that encompass those waters. It also claims the Spratly and Paracel archipelagos as its sovereign territory and restricts foreign access around them.

The Navy regularly rejects those restrictions with freedom-of-navigation operations by sending warships within 12 nautical miles of the islands. Germany, however, will not send its warship within those boundaries, Reuters reported.

"The United States has a national interest in the maintenance of peace and stability, respect for international law, lawful unimpeded commerce, and freedom of navigation and other lawful uses of the sea," the State Department spokeswoman said, according to Reuters.