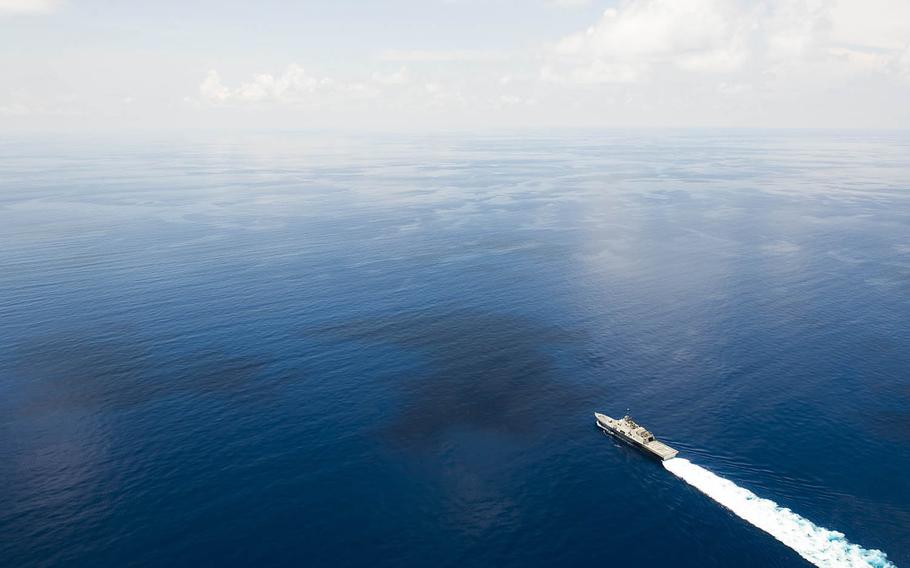 The littoral combat ship USS Fort Worth, trailed by a Chinese guided-missile frigate, sails near the Spratly Islands in the South China Sea, May 11, 2015. (Conor Minto/U.S. Navy)

The Philippines has accused Chinese diplomats of lying after they claimed hundreds of ships trespassing in Philippine waters are sheltering from bad weather.

Diplomats from the island nation protested last month after 220 Chinese fishing vessels were spotted by the Philippine coast guard near Julian Felipe Reef in the Spratly Islands.

Philippine Defense Secretary Delfin Lorenzana on Saturday told the vessels to sail away and for the Chinese to "leave our sovereign territories and abide by international law."

That prompted a retort from the Chinese Embassy in Manila, where a spokesman said authorities should "avoid any unprofessional remarks" over the ships’ presence.

In the latest salvo, the Philippines Department of Foreign Affairs accused the Chinese of “blatant falsehoods” and denied adverse weather conditions were present near the islands.

“Julian Felipe Reef is part of the Kalayaan Island Group and lies in the Exclusive Economic Zone of the Republic of the Philippines,” the department said in a statement posted on its website Monday.

The Philippines rejects China’s assertion that the reef and its waters are its “traditional fishing grounds,” the statement said.

China’s claim to most of the South China Sea was rejected by an international tribunal in 2016; however, Beijing has ignored the ruling and built military facilities on seven of the disputed Spratly sites, according to the Asia Maritime Transparency Initiative.

The United States does not recognize China’s claims and conducts frequent freedom-of-navigation patrols in the disputed waters.

The international court ruling against China’s claim covers the vessels near the reef, the Philippines’ statement said.

“The Department of Foreign Affairs therefore reiterates the demand of the Secretary of National Defense that China immediately withdraw its fishing vessels and maritime assets in the area and vicinity of Julian Felipe Reef and in the Philippines’ maritime zones,” the statement said.

For every day of delay, the Philippines will lodge a diplomatic protest, the statement said.

The U.S. is backing the Philippines in the dispute. In a March 24 tweet, State Department spokesman Ned Price said: “The U.S. stands with our ally, the Philippines, regarding concerns about the gathering of [Chinese] maritime militia vessels near Whitsun Reef. We call on Beijing to stop using its maritime militia to intimidate and provoke others, which undermines peace and security.”

However, the rhetoric appears to have had little impact on the vessels’ presence.

On Saturday, Philippine broadcaster ABS-CBN News reported there were “hundreds of Chinese vessels” at Julian Felipe Reef and around Gaven and Chigua reefs, which are part of the Union Banks near Julian Felipe.

The vessels and Chinese coast guard prevent Philippine fishermen from going to the areas, according to locals quoted by the broadcaster.