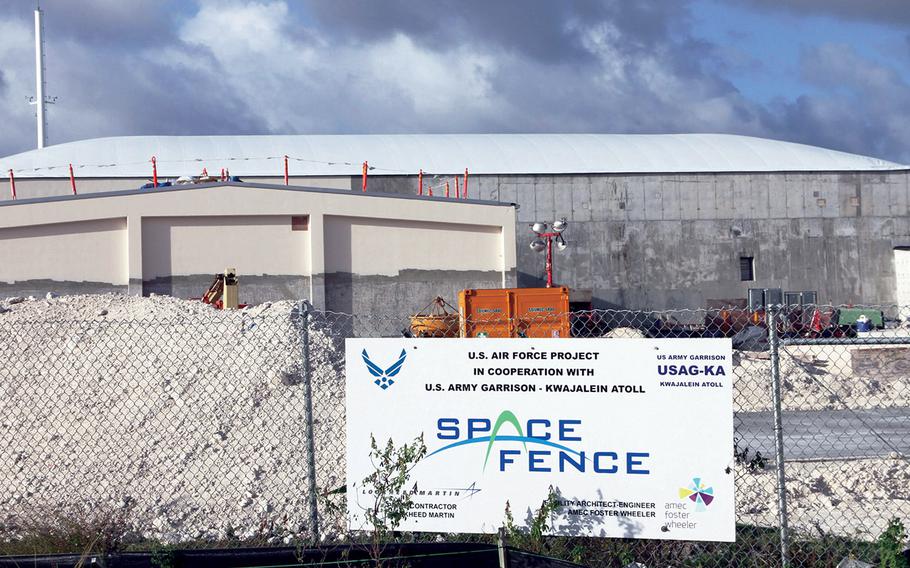 Buy Photo
The $914 million Space Fence system being built on Kwajalein Island in the South Pacific will allow the Air Force to monitor space debris and hostile threats in Earth’s lower orbits. (Wyatt Olson/Stars and Stripes)

Buy Photo
The $914 million Space Fence system being built on Kwajalein Island in the South Pacific will allow the Air Force to monitor space debris and hostile threats in Earth’s lower orbits. (Wyatt Olson/Stars and Stripes) 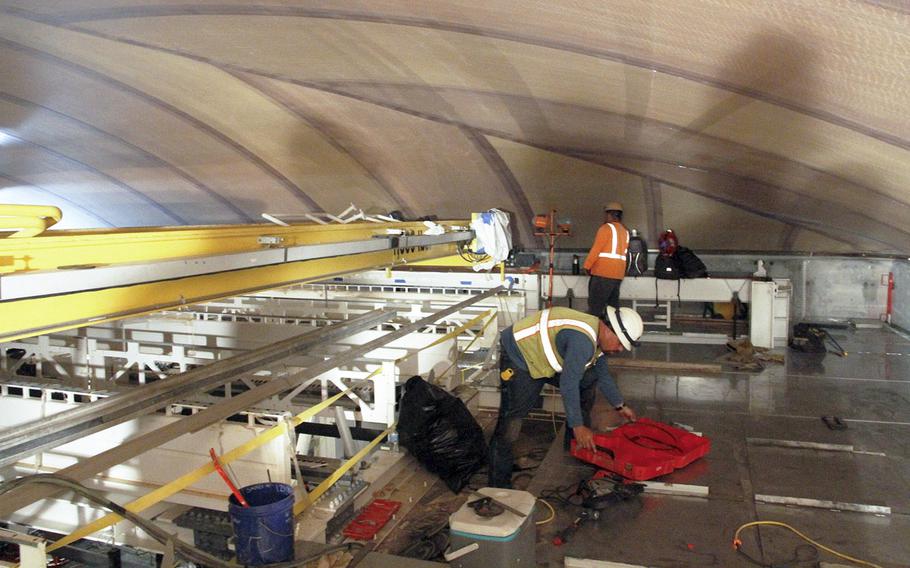 Buy Photo
Workers stand below the electronically transparent Kevlar roof that covers one of the Space Fence radar chambers at Kwajalein Island. (Wyatt Olson/Stars and Stripes) 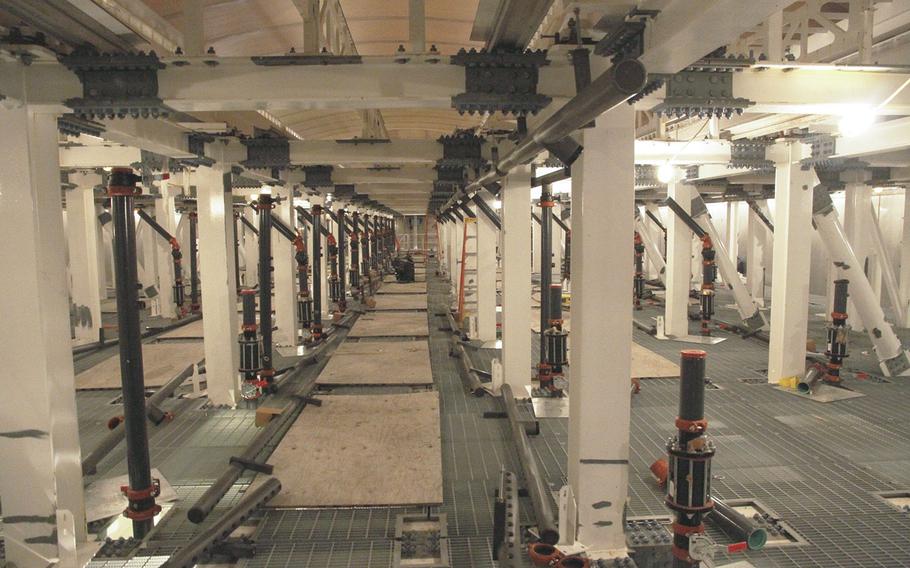 Buy Photo
A million tons of steel will anchor the radar array, which will allow the Air Force to monitor even subtle course changes for space junk. (Wyatt Olson/Stars and Stripes)

KWAJALEIN, Marshall Islands — The Earth is orbited by half a million pieces of space debris, much of it leftovers from decades of missile, shuttle and satellite launches.

More than 20,000 pieces are bigger than a softball, some zooming faster than 17,000 mph, according to NASA.

The military has long tracked this atmospheric anarchy, to prevent collisions with working satellites and to monitor what potential adversaries might be launching into space.

The Air Force Space Surveillance System, which shut down in 2013 after 50 years, tracked about 20,000 objects. Space Fence, a tracking system being built by Lockheed Martin on the remote South Pacific island of Kwajalein, is expected to be able to track 200,000.

Dana Whalley, the Air Force’s Space Fence program manager, compared the old system to using a flashlight to search a dark attic, while Space Fence will light up the entire room.

Space Fence will be able to detect objects as small as marbles at the roughly 250-mile height of the International Space Station. Such a small speck of debris might sound benign, but NASA has replaced space shuttle windows damaged by flying paint flecks.

“Space is becoming an increasingly congested environment,” he said.

Space Fence will thoroughly catalog pertinent debris so that even subtle location changes can be detected. That will allow the U.S. to move satellites out of harm’s way.

“The fact that this is very precise is a benefit in two ways,” Schafhauser said. “First is that you wouldn’t be spending fuel moving things out of the way unnecessarily, and second, you reduce the risk of collision to begin with.”

Space has also become increasingly contested, “given the continuing demonstrations of anti-satellite weaponry from other nations,” Schafhauser said. “We want to keep track of what they’re doing as well.”

“Russia has publicly stated they are researching and developing counterspace capabilities to degrade, disrupt and deny other users of space,” Haney said, adding that North Korea and Iran’s hacking and counterspace operations merit international attention.

The Air Force’s defunct tracking system was “basically a bell-ringer function,” meaning if something passed through, it would cue other sensors to determine its orbit and characteristics, he said. Space Fence can track and process movements on its own.

Lockheed Martin developed and built a small prototype in New Jersey before construction began on Kwajalein, about 2,100 miles southwest of Hawaii.

The $914 million system is expected to be finished by the end of 2018. Hundreds of technicians, engineers, electricians and laborers are working six 10-hour days a week on Kwajalein to stay on schedule.

Far fewer people will be needed to operate Space Fence once the Air Force takes over. About a dozen people will maintain the Kwajalein site, with 12 more at its operations center in Huntsville, Ala. Relevant data will be fed to the Joint Space Operations Center at Vandenberg Air Force Base, Calif., which will make decisions on space intervention.

The Air Force chose Kwajalein — home to the Ronald Reagan Ballistic Missile Defense Test Site — in part because its location near the equator is advantageous in monitoring objects in low-to-medium orbit, Space Fence’s target area.

The site is composed of two pressurized radar chambers, one for transmitting into space and the other for receiving those radio frequencies. Roofs covering each chamber are made of thick, electronically transparent Kevlar.

Passing through air locks into the radar chambers is an ear-popping experience. At the chambers’ ground level is a crisscross of a million pounds of anchoring steel.

“What you’re looking at is a steel structure that’s very sturdy to not only maintain alignment of the radar array face, which is at the very top of this, but also because we have seismic requirements that we’re dealing with here,” Schafhauser said during the tour. “That accounts for the size of it all.”

Wide aluminum columns carry coolant, and 50,000 tons of concrete make up the thick foundation and walls.

Building the radar system depends on a complex logistics stream that originates in Los Angeles, ships to Guam, then to Kwajalein.

Particularly challenging was the shipping and installation of the two sheets of Kevlar roofing. They were manufactured as two single pieces, the largest of which had to cover a 150-by-50-foot area after inflation.

The Kevlar was folded like an accordion, then shipped by sea. To avoid damage, it had to be unfolded and installed when winds were under 10 mph for at least 12 hours — a rarity on Kwajalein.

They ended up erecting a windbreaker around the building similar to the fencing found around tennis courts.

Space Fence is named for the grid-like pattern of beams it projects into space.

“That pattern of beams is attached to the Earth that rotates around, basically sweeping that fence around, and every satellite in low-Earth orbit passes through that fence an average of about twice a day,” Schafhauser said.