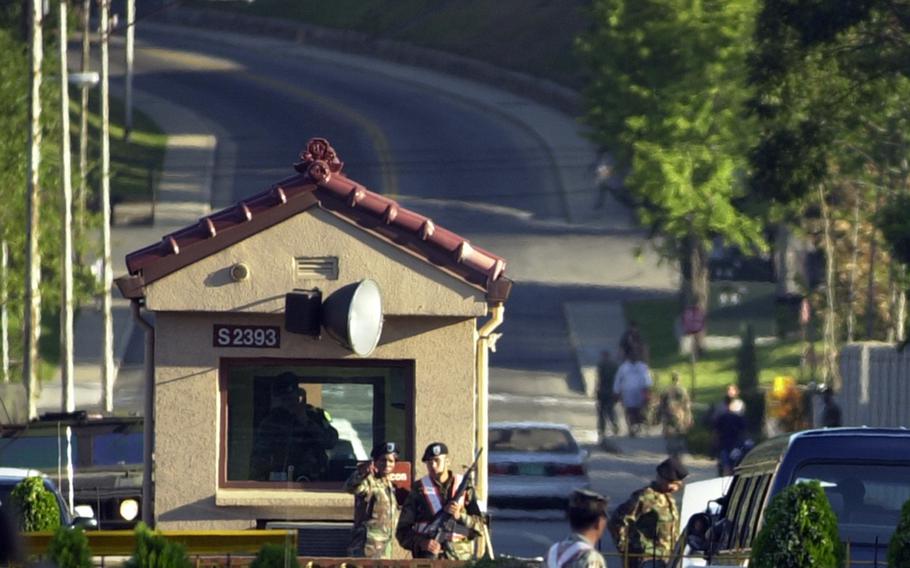 YONGSAN GARRISON, South Korea — A South Korean woman trespassed on this U.S. Army base in Seoul via one of the main gates but was quickly caught and turned over to local police, officials said Wednesday.

The woman entered Yongsan without permission at about 4:30 p.m. Tuesday through the access control point near the Noksapyeong subway station known as Gate 3, which is on the edge of the popular neighborhood of Itaewon, said garrison spokesman Wes Hayes.

“A garrison worker saw a suspicious woman near that area and immediately reported it to the provost marshal’s office, who responded to the scene and apprehended her,” Hayes said, adding the woman had been turned over to South Korean officials.

He declined to give more details, saying garrison security officials are investigating the incident.

A local police official said the woman is in her 20s and claimed that she ran onto the base to escape somebody who was trying to kill her. She was apprehended in a parking lot near the gate, according to the official with the Yongsan police department, who spoke on condition of anonymity in exchange for discussing the investigation.

She was accused of violating a law for the protection of military installations but was released on the recommendation that she be prosecuted without detention, the police official said.

The gate breached by the woman is one of the few still accessible to vehicles and pedestrians on the former U.S. Forces Korea headquarters base, which has been shrinking since the command and most other American troops moved to hubs south of Seoul as part of a long-delayed relocation plan.

Some 28,500 U.S. servicemembers are stationed in South Korea, which technically remains at war with the North after their 1950-53 conflict ended in an armistice instead of a peace treaty.