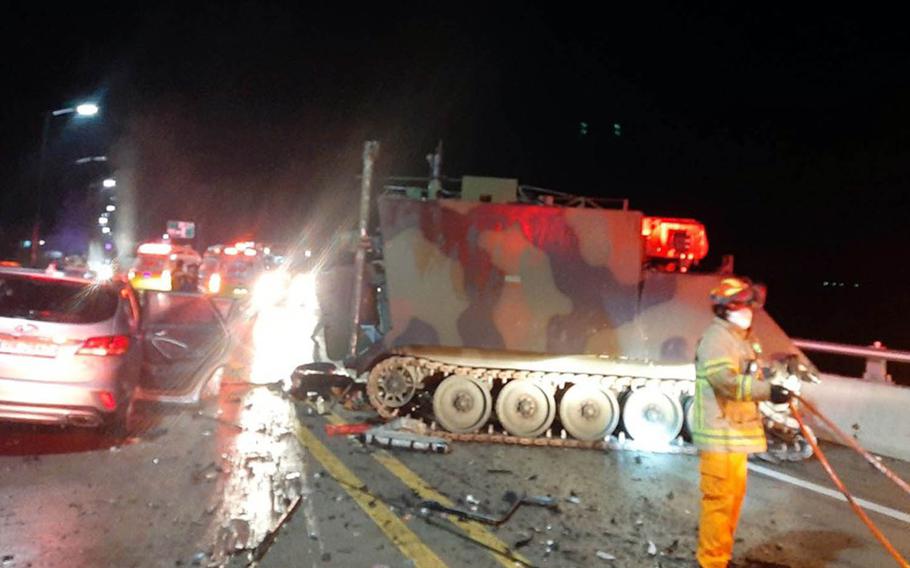 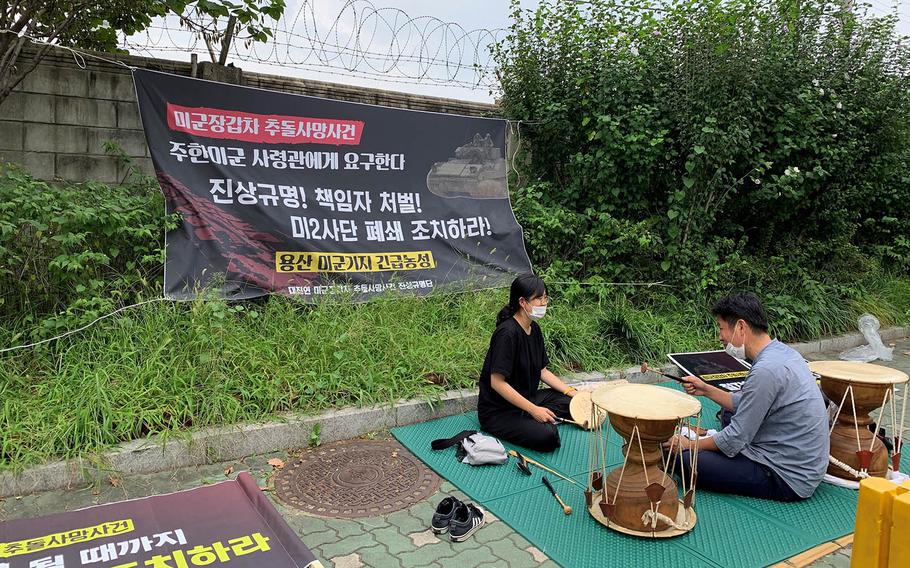 Buy Photo
Members of the Progressive Korea University Student Association call for answers on the U.S. military's involvement in a fatal car crash during a sit-in outside Yongsan Garrison in Seoul, South Korea, Sept. 14, 2020. (Kim Gamel/Stars and Stripes)

SEOUL, South Korea — The driver of a sport utility vehicle that rear-ended a U.S. armored personnel carrier last month was drunk and speeding at the time of the fatal collision, police said Friday.

The Aug. 30 crash occurred on a bridge as two American soldiers in the military vehicle were headed home after a training at the Rodriguez Live Fire Complex in Pocheon, 30 miles north of Seoul. The soldiers were not seriously injured; all four people in the SUV died.

The collision prompted the U.S. military to suspend training in the area, which has long been the source of frequent complaints from locals about noise and stray ordnance. The SUV passengers — two South Korean couples in their 50s — were from Pocheon and were on the way home after having dinner with friends in the area, an investigator at the local police station said.

The driver had a blood alcohol content well above the legal limit and was going more than 60 mph in a 40 mph zone when the crash occurred, according to the officer, who spoke on condition of anonymity in line with department rules.

The vehicle had pulled over before the crash to allow the driver to switch places with another man, and nobody appeared to notice the military vehicle in front of them, the police said, citing data from the dashboard camera and roadside surveillance footage.

The speed was determined from the event data recorder in the airbag control module.

“The SUV owner was at the wheel when they left the house they had been visiting, but the owner gave control to the driver a few minutes before the crash,” the investigator said. “The driver is suspected of having neglected to keep his eyes on the road in addition to being drunk at the wheel and speeding.”

An autopsy by the National Forensic Service found that both men had a blood alcohol content level higher than 0.1%, which would have been high enough to merit license revocation, the investigator said. Police declined to give more exact figures because of rules about personal information.

U.S. Forces Korea has expressed deep condolences for the loss of life and suspended training in the mountainous area near the border with North Korea “out of respect to those killed and their families.”

Tensions with the local populace have forced the military to send Air Force and Army combat helicopter crews off the peninsula to maintain their live-fire qualifications, USFK commander Gen. Robert Abrams said recently.

He said USFK was working closely with South Korea’s Defense Ministry to resolve the concerns.

Meanwhile, a left-wing university student activist group claiming that the military vehicle should have had an escort has held near-daily protests outside Camp Casey, the main U.S. base in the area, occasionally forcing gates to be closed.

Police said the investigation was ongoing and they have asked USFK to provide information about the status of forces agreement.