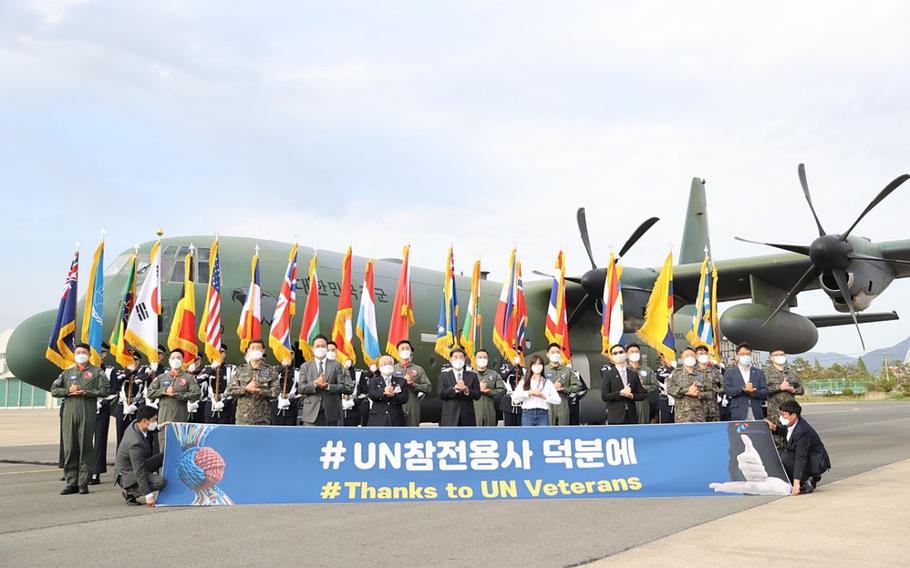 South Korean officials held a ceremony at Gimhae Air Base on Friday to celebrate plans to send 500,000 face masks to the United States to be provided to American veterans of the Korean War. The flight was delayed until Sunday night due to weather. (South Korean Ministry of Patriots and Veterans Affairs)

SEOUL, South Korea — South Korea sent 500,000 face masks to help American veterans fight the coronavirus in honor of the upcoming 70th anniversary of the start of the 1950-53 Korean War.

An air force plane took off Sunday night from Gimhae Air Base near the southern city of Busan to transport the masks to the United States, according to the Ministry of Patriots and Veterans Affairs.

The ministry said it will later distribute 500,000 more masks via overseas missions to Korean War veterans in 21 other countries including Britain, Canada and Turkey that participated in the war under the auspices of the United Nations.

The government is providing the 1 million protective masks "to the aging U.N. veterans of the Korean War to mark the 70th anniversary and to recognize their service and sacrifice,” the ministry said in a press release. It said the veterans’ average age is 88.

“We would never compare these masks to the noble service and the ultimate sacrifice shown by the U.N. veterans during the war, but we sincerely hope our small gesture would help our veterans in dealing with the coronavirus,” said Kim Eun-gi, a co-chairman of the committee organizing commemorations for the anniversary.

As the nations did 70 years ago in the war, he said, “we will overcome the COVID-19 crisis when we stand side by side together.”

The masks bound for the U.S. will be received by the Department of Veterans Affairs, a ministry official said.

Masks have become a valued commodity worldwide because of shortages amid the coronavirus pandemic.

South Korea, one of the first countries to suffer an outbreak, has restricted mask exports. But government officials said the shipment could be made without disrupting the domestic supply.

The war, which began on June 25, 1950, when North Korean communist troops invaded the U.S.-backed South, was the first military action of the Cold War.

Fighting between the allies against Chinese and North Korean forces persisted as truce talks took some two years, concluding with an armistice that left the countries technically at war after the sides were unable to reach a peace treaty.

The United States provided more than 90% of the foreign combat forces, with more than 300,000 American troops deployed on the peninsula as U.N. forces reached peak strength toward the end of the war, according to the United Nations Command.

More than 36,000 Americans died, 103,284 were wounded in action, and more than 7,500 remain unaccounted for - most believed to be lost in North Korea where the search for remains has been hampered by tensions.

More than 3 million people are estimated to have died in the war, although it’s impossible to confirm an exact figure due to the lack of information from North Korea.