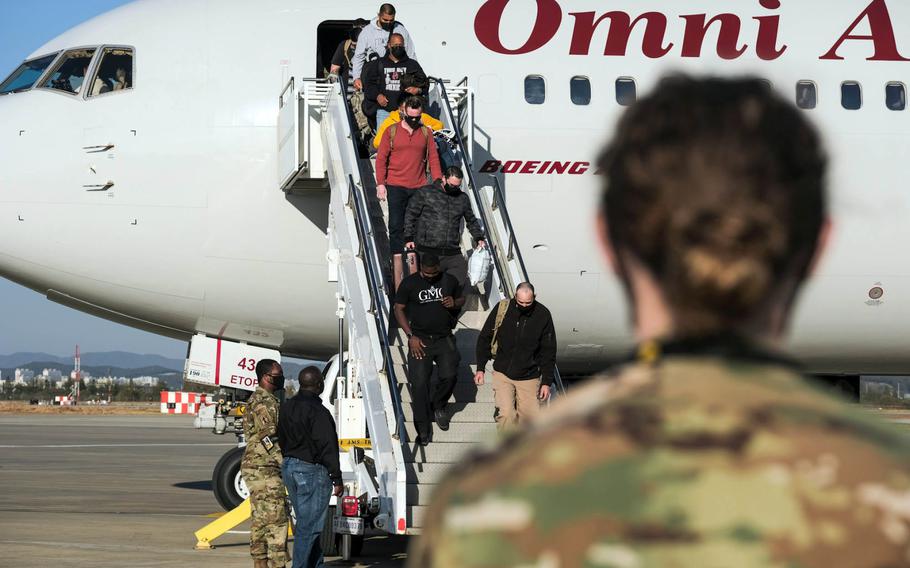 OSAN AIR BASE, South Korea – All U.S. military personnel inbound for South Korea must abide by a new requirement to present proof of a negative coronavirus test upon their arrival starting Friday, according to U.S. Forces Korea.

South Korea will require all foreign travelers to present proof of a negative polymerase chain reaction, or PCR, coronavirus test taken within 72 hours before their departure for South Korea, the Ministry of Foreign Affairs announced Dec. 31.

USFK has asked the government to delay until Jan. 15 the requirement for U.S. citizens subject to the status of forces agreement, but until it receives a response the requirement is in effect, USFK spokeswoman Jacqueline Leeker told Stars and Stripes in an email Tuesday.

USFK passed the word to its personnel in a news release Monday.

The Patriot Express is a government-contracted passenger air service between the U.S. and its bases in the Pacific.

Of nearly 500 cases of the coronavirus reported by USFK during the pandemic, the majority of them, 464, were individuals arriving in South Korea on either the Patriot Express or commercial flights into Incheon International Airport. That number includes service members, Defense Department civilians and dependents.

The move by South Korea comes as the nation grapples with a rising coronavirus caseload. The country reported its highest numbers in December: 27,117 new cases and 391 deaths, according to the Johns Hopkins Coronavirus Resource Center.

South Korean public health officials announced Dec. 28 that it had detected the first individuals infected with a coronavirus variant linked to an increase in cases in the United Kingdom.

However, USFK has kept the coronavirus at bay through a regime of mandatory testing and 14-day quarantine for new arrivals and confirmed cases.

Japan on Dec. 28 imposed a similar requirement for proof on resident foreigners entering the country, but U.S. military personnel are not required to present proof of a negative test upon arrival, a spokesman for U.S. Forces Japan said Dec. 30.

Col. Robert Firman said no changes were made to regulations governing U.S. personnel governed by the status of forces agreement. Like USFK, the U.S. command in Japan has the same testing and quarantine requirements for its people entering the country, he said.

USFK is contacting U.S. commands, asking them to individually update anyone with orders for assignments in South Korea.

The Army began testing overseas travelers in late August, while other service branches have only required random testing.

“A negative test prior to travel has already been an Army directive for quite some time but will be a new requirement for personnel in the other services,” said Leeker.

Short-term travelers who are not affiliated with the Defense Department will be required to quarantine at a government-designated facility at their own expense for 14 days, according to the U.S. Embassy in Seoul’s website.

The nightly cost at these facilities could range from $100-$150 per night, prices are set by Korean authorities.