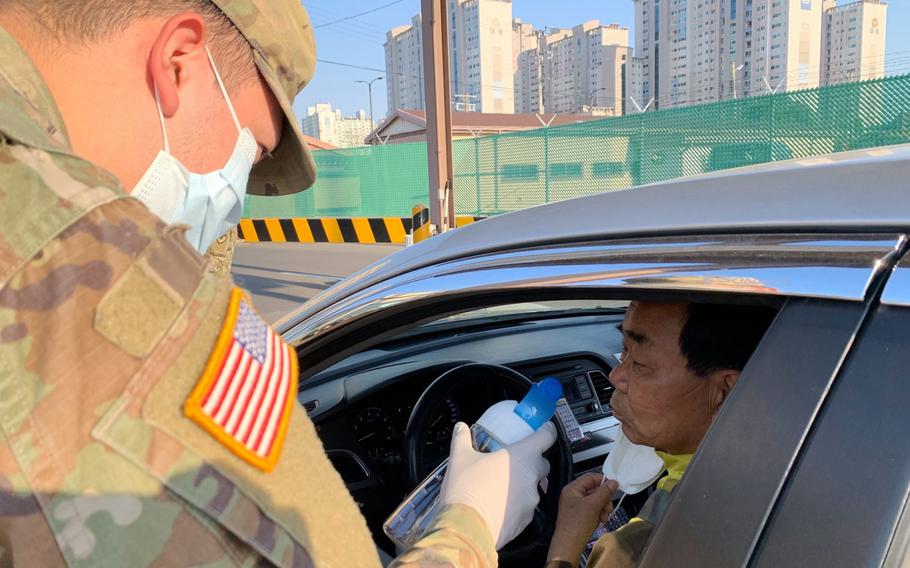 SEOUL, South Korea — The Army garrison in Daegu, the center of South Korea’s coronavirus outbreak, is trying a new way to sniff out people who may have the respiratory disease — a smell test.

Beginning Friday, people trying to enter U.S. installations in the southeastern city were being randomly asked if they can smell apple vinegar as part of the health screening process that has been in place since the outbreak began on Feb. 20.

“We are now performing random smell tests at the entrance gates of Camps Walker, Carroll and Henry to help better detect personnel who may be infected by COVID-19,” the garrison said Friday on its Facebook page, using the virus’ official name. “Those personnel who cannot detect the screen will be further screened.”

Officials said Sunday the test began on an experimental basis at Camp Walker this weekend and would likely be expanded to the other bases in coming days.

Medical organizations have pointed to mounting evidence that anosmia, the loss of smell or taste, may be an early indicator of the highly contagious virus, although it has so far been largely anecdotal.

Army Garrison Daegu was the first military base to implement a strict screening regimen that includes temperatures checks and a questionnaire to determine potential exposure by location.

Those procedures have been emulated on bases across the divided peninsula and in other countries since the virus has become a global pandemic, infecting more than 1 million people and killing more than 56,000.

Daegu, a city of 2.5 million people, was hard hit with more than 60% of South Korea’s 10,236 cases as of Sunday, according to the Korea Centers for Disease Control and Prevention.

Eight of the 18 cases affiliated with the U.S. military in South Korea were at USAG Daegu, including the first soldier to be infected who was stationed at Camp Carroll.

“We have not had a single transfer of the disease on our base,” garrison commander Col. Edward Ballanco said Thursday in a Facebook live community update. “This will be another step that we can take to prevent that from happening.”

The smell test was modeled on a similar process employed at local hospitals, he added.

“It won’t be every car. We’re just going to experiment with this and see how it works and how it goes,” he said, displaying a plastic cup with a sponge soaked in vinegar.

The process was adapted over the weekend, with the garrison saying it would use soaked cotton swabs that could be handed to each individual, then immediately discarded.

People who don’t have a sense of smell or who are allergic to vinegar were instructed to inform the screeners about their condition.

The World Health Organization has said it is probing a possible link between anosmia and coronavirus but has not yet listed it as a symptom.

The most common symptoms of the disease caused by coronavirus are fever, fatigue and a dry cough, although some patients may have aches and pains, nasal congestion, runny nose, sore throat or diarrhea, according to the WHO.

ENT UK, a group representing ear, nose and throat doctors in Britain, said in a guidance document last week that significant numbers of patients in countries with high coronavirus rates, including South Korea, had developed anosmia.

Researchers at King’s College London found that 59% of 579 respondents who reported suspected coronavirus symptoms to an app and tested positive for the disease reported loss of smell or taste, the BBC reported.

“When combined with other symptoms, people with loss of smell and taste appear to be three times more likely to have contracted Covid-19 according to our data, and should therefore self-isolate for seven days to reduce the spread of the disease,” Tim Spector, a King’s professor who led the study, was quoted as saying.